I was scheduled to take a group rafting in the Adirondacks over Memorial Day, but unfortunately the wedding got called off. Not the best start to my Bachelor Party Ideas Blog (BPIB), but whatta ya gonna do?

I decided to head out to New York anyway and use the weekend for a little R&R of my own. For those who are unaware, Albany is the capital of NY, and its trademark monument is a building shaped like an egg that holds the performing arts. 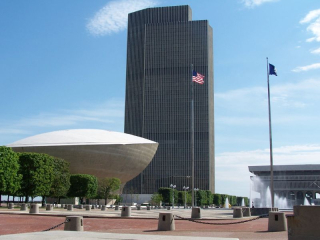 After getting in on Thursday I set out to explore the town. I was taking pictures outside a bar and the owner came out to inquire as to what I was doing. Probably partly out of general interest and partly out of concern that I was casing the joint. After talking to Joe for a while and explaining my reason for being here, he gave me the VIP tour of the place and the dish on the Albany nightlife, which was better than I expected.

Later in the day I came across this incredible building, but have no idea what it was for. 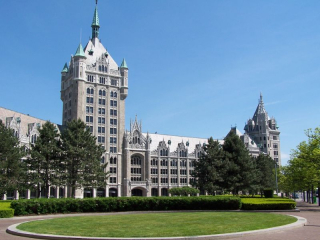 Since it was a beautiful day I headed across the freeway over to the Hudson River. Joe turned me onto a little bar on the water that actually was originally some sort of Mark Twain-type paddle boat. It actually sat in the water and was filled with patrons doing Conga Lines and enjoying the weather (It was only 1:00PM) 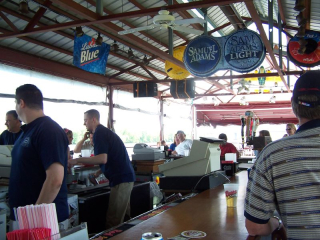 After enjoying a few cold ones, I headed back to the hotel to get some work done. I spent the rest of the evening in the lobby bar, working and watching the Pistons even the series with the Miami Heat at 1.

The next day I headed over towards Syracuse to do some recon on a casino (Turning Stone) that was housing a bachelor party for me in a couple months. It was a magnificent site that had everything you nededed to keep you happy and gambling all weekend long. The only issue was that the casino did not have a Liquor license. This can be a bit problematic, especially for bachelor parties. I spent some time talking to the management and found that although they could not serve it, they would have it delivered and provide you coolers to keep you and your beer happy.

Behind the hotel they had an awesome lodge for the high rollers. The lodge was surrounded by 4 golf courses

The next morning I was up at 6:00am to head up to Lake George for a day of rafting. I got to the Base Camp a little early, so I took a trip up to the ski resort at Gore Mountain

It was memorial Day weekend so I thought I would stop by a local cemetery and pay my respects. There I was granted a great view of some late 1800's headstones surrounded by flowers and American Flags

Finally it was time for some rafting. After introducing myself to Pat, the owner, and getting the nickel tour, I suited up and meet up with the rest of the boat crew. 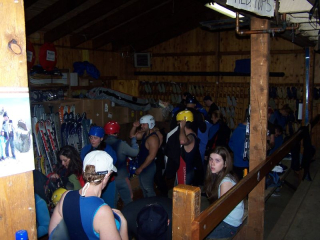 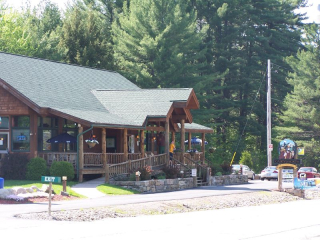 As luck would have it, I got matched up with 5 other guys from Penn State who were here for a bachelor party. Jeff, Tom, Dennis, Mark and Mike were all great guys and we joked all trip about the upcoming Notre Dame Penn State football game. Actually we were both just happy to have respectable football programs after seasons of heartache.

The fist rapid we hit was "Little Kahuna" and I got tossed. I had just finished talking about my rafting in the Rockies the weekend before and off I went. Another guy got tossed with me and somehow I was able to hold onto him with one hand and the boat with the other until we made it through. After getting back in the boat and laughing our tails off I tried to convince them to change the hit to "Big Kahuna", but no dice, my pride and credibility was lost.

These were really a great group of friends, reminded me a lot of my college buddies. I had a lot of respect for these guys, as they had organized this trip on their own. It really showed how much their friendship meant that they would go to great lengths to drive 10 hours to celebrate the Marriage of one of their fallen comrades.

As the day went on, I got tossed 1.5 more times. .5 represents the fact that my feet were the only thing left in the boat after one hit and somehow I was able to pull myself back in.

After finishing up the trip we headed back to camp and enjoyed a great dinner while watching the video. The weather could not have been better. The water was actually much warmer then I anticipated. After spending the previous weekend in the Rockies I was prepared for the worst, but the fact that we were not coming right off the glacier made for an easier time of it. 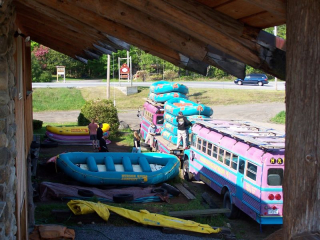 After saying my goodbyes, I headed back to Albany for my flight to Detroit. I really felt bad for the guys who were supposed to go along on the trip as I know it would have been a great weekend, but I also enjoyed the solitude the weekend provided me. It gave me time to reflect on my decision to make my passion my career and try to make sense of the last few weeks and the upcoming trip to AZ.

Driving through upstate NY reminded me of a family trip to the baseball hall of Fame in Cooperstown NY. These little towns nestled in the mountains where life was simple and computers and ipods took a backseat to imaginary military battles with friends and buying baseball cards at the local store only to be upset by the fact that the best card in the pack got ruined by the stick of gum in the pack.

Until next week when I will be Skydiving in Arizona.

Live every day as if it were your last,