« SoCal National Park Loop (Part 1 of 7) | Main | The Secret to Happiness….Brought to You by Hasbro »

It was 4th of July weekend and I had to work Friday/Saturday, so was itching to make the most of Sunday. I sometimes check in on this guy's blog (Lars Jensen):


Like me he seems to enjoy backpacking, photography and getting outdoors every possible free moment.  I was impressed by his images of this jewel in my backyard that I had not heard of, more specifically a very small island called Turnip Rock.

I convinced a friend to go and we were off by 7am from Detroit. We arrived on the 4th around 9am and rented our kayaks from the below vendor for $22/3hr each.

Here is the Map of the various Trails..we took the yellow trail. 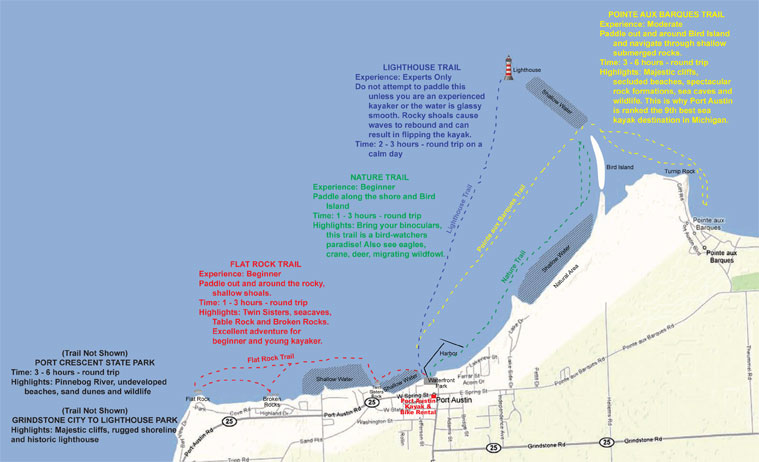 
We had about a 45 min kayak southeast to get to the rock. The wind had a little fight in it so it was an easy paddle. 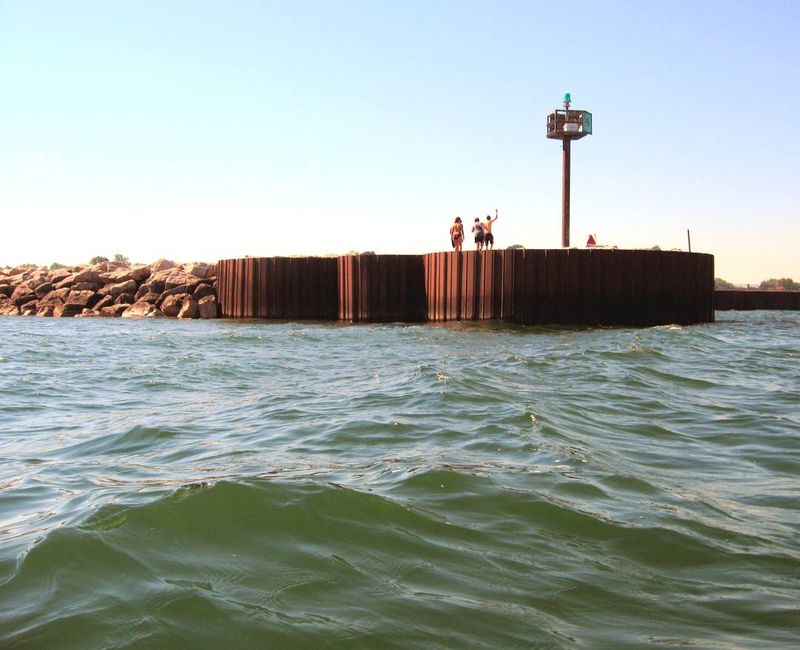 My friend was as novice as they come so I did not tell him that as a rule you kayak upwind so that when you are tired you can float back. My goal was to get to the rock and his comfort was not high on my priority list. 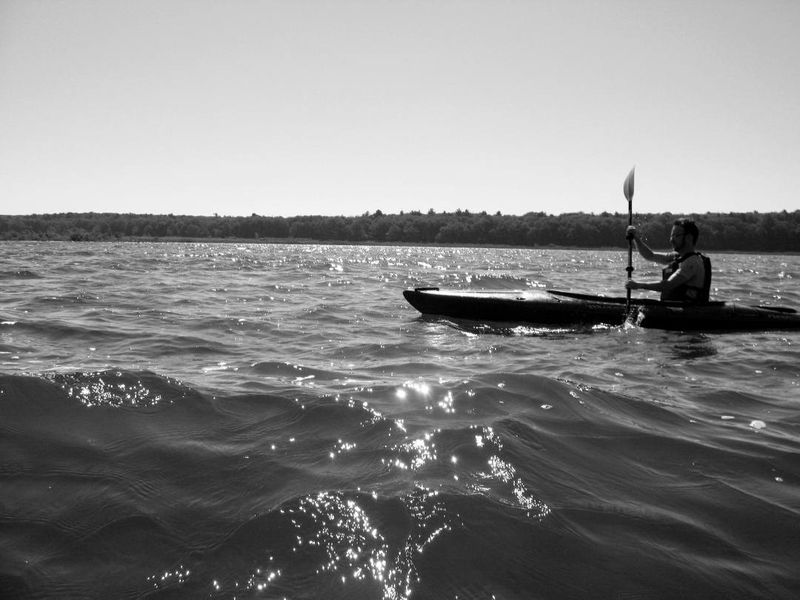 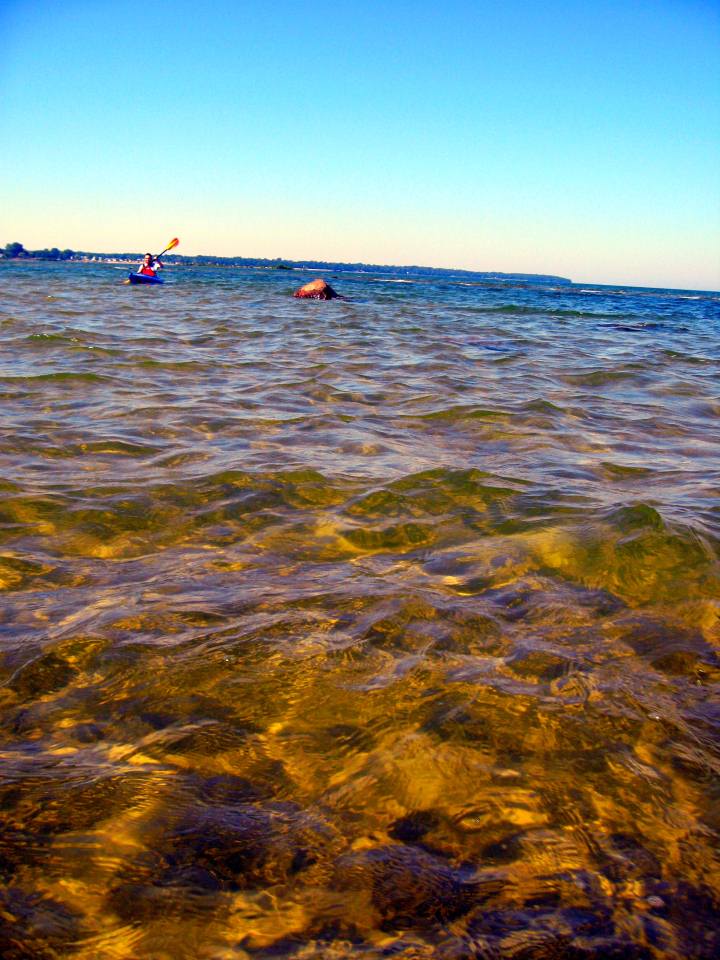 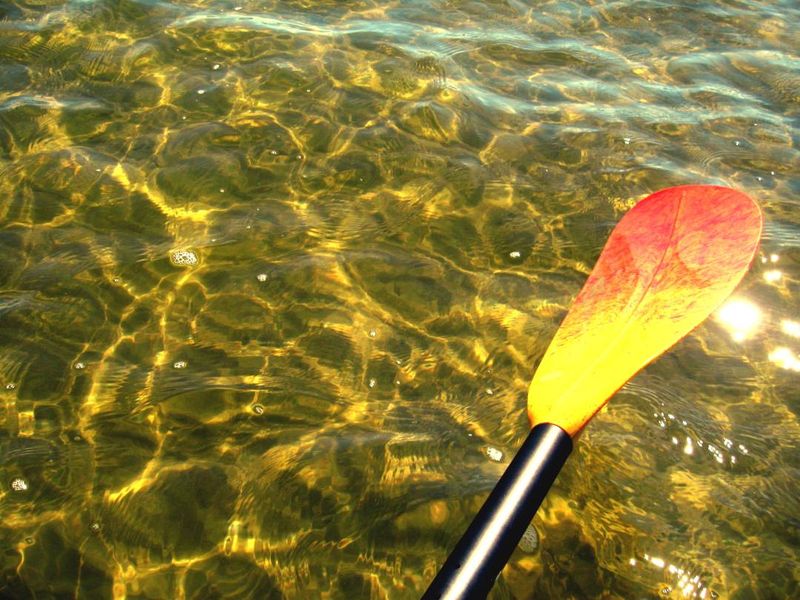 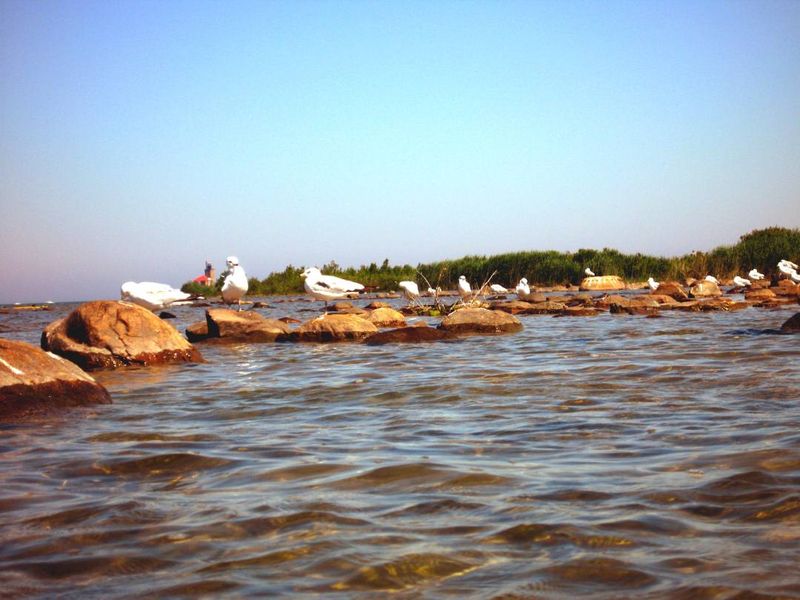 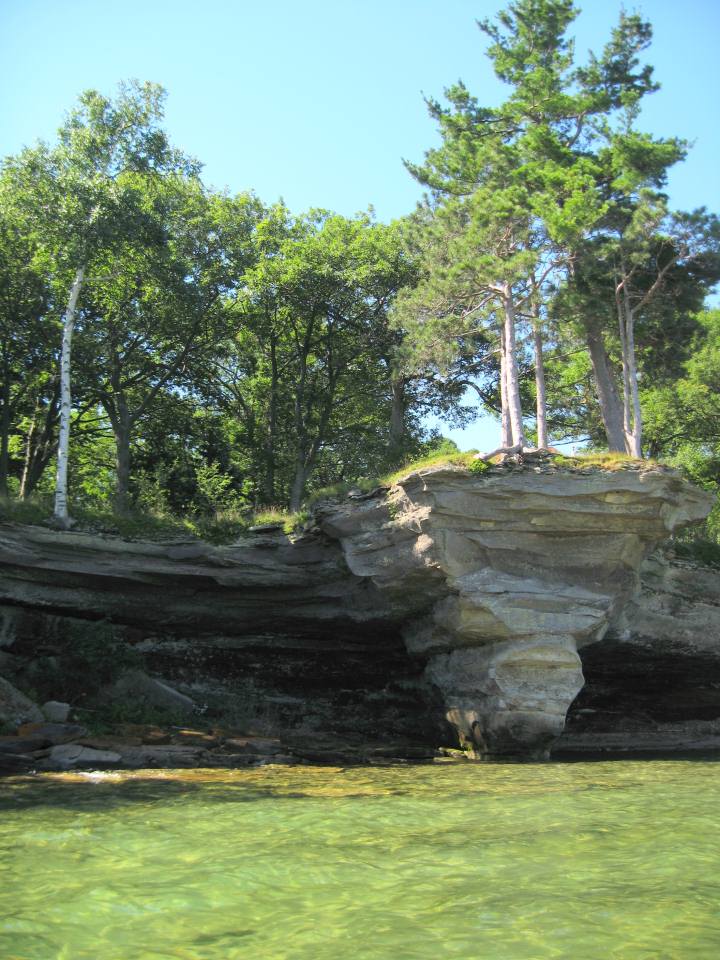 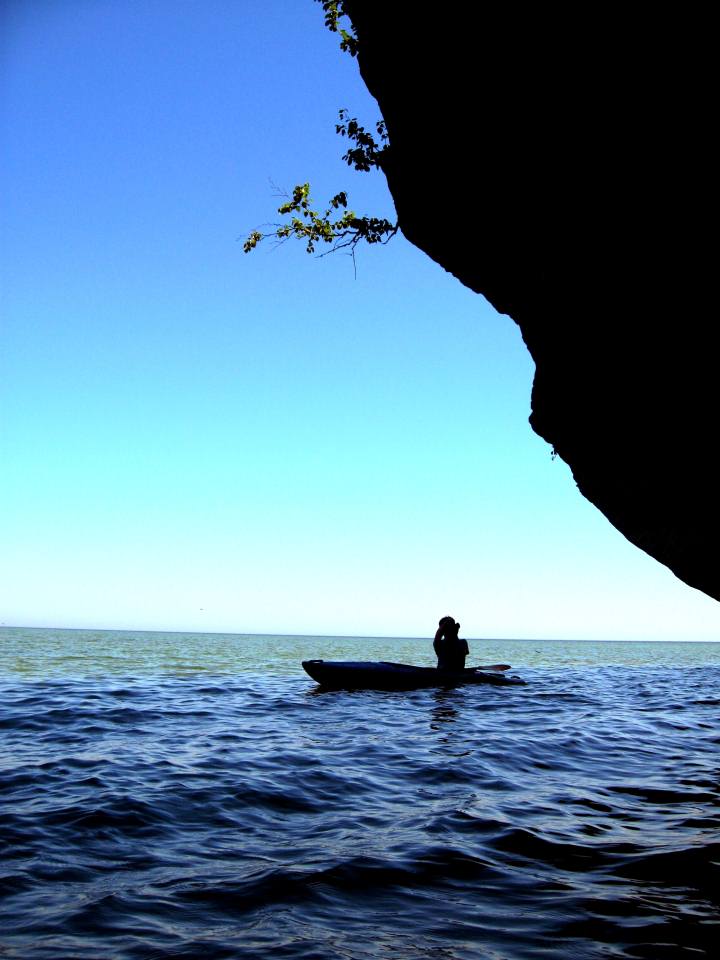 We made the rock and were surrounded by jetskis, barking dogs and tons of kayaks. It is an automatic buzzkill. 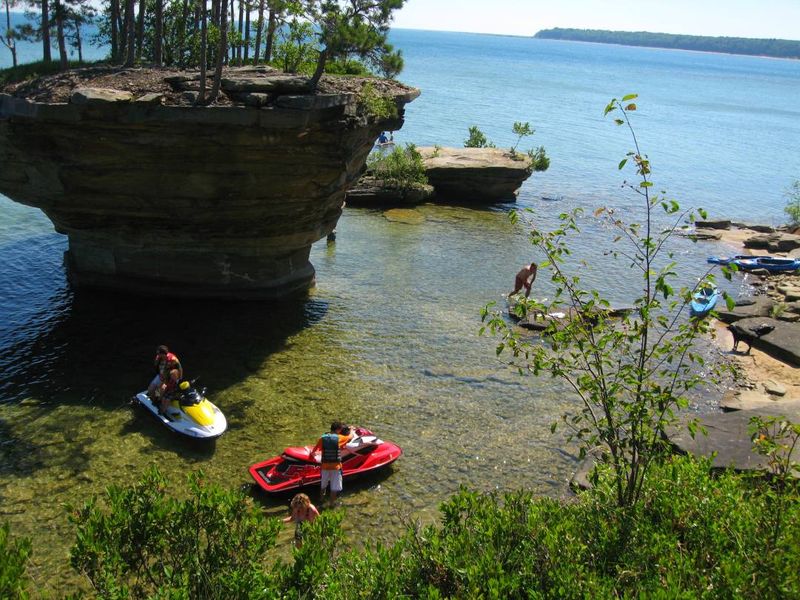 We waited it out and had some time alone with the rock and the few houses strewn across the cliffs. Unfortunately this was private property and not state or federal regulated land, a shame for sure. 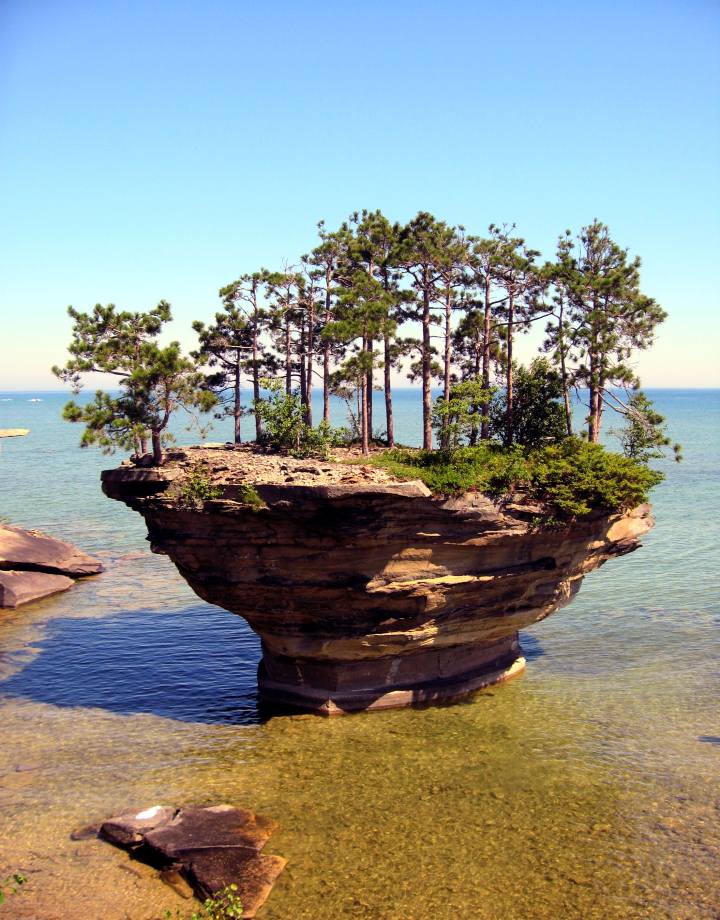 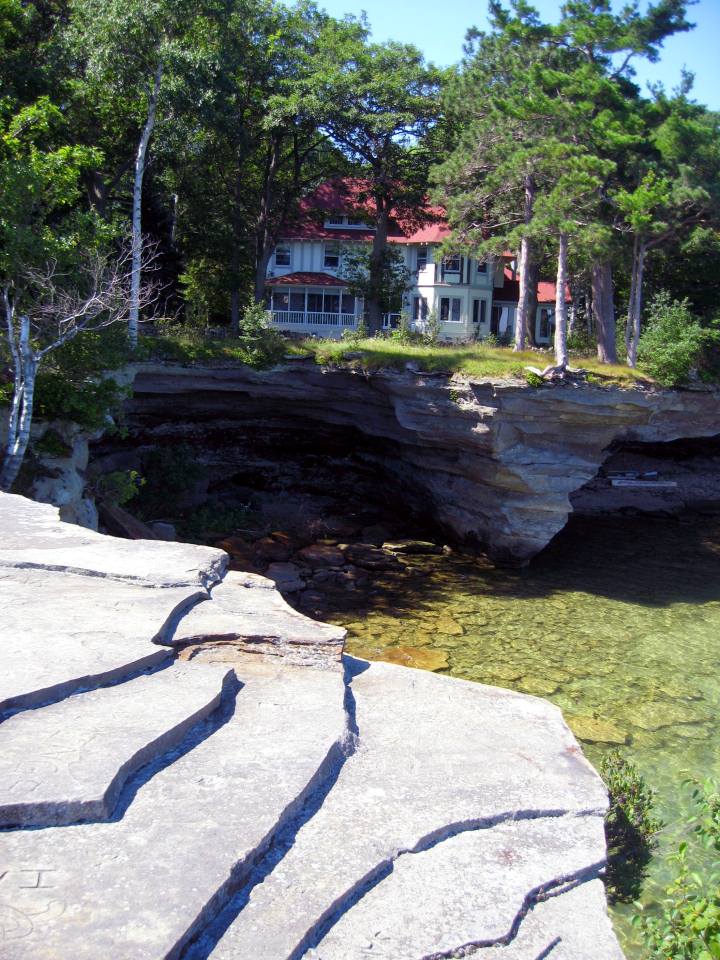 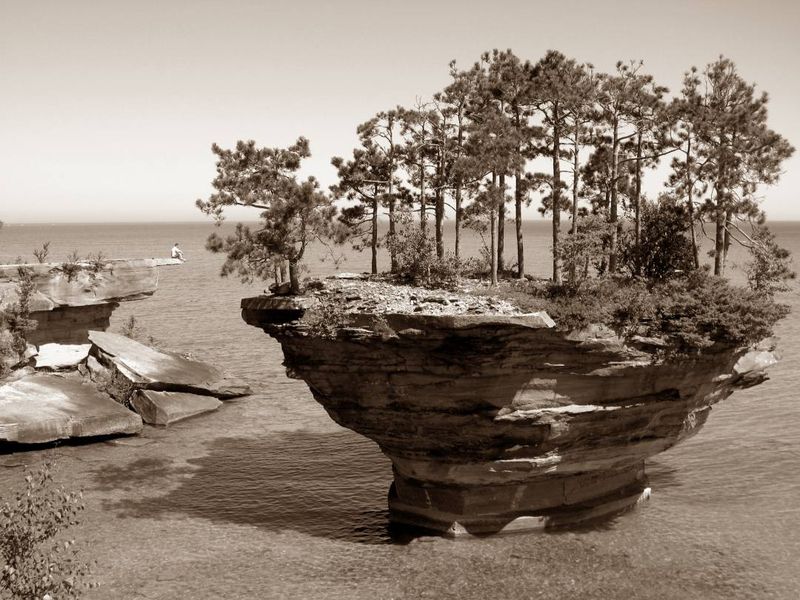 Above, if you look close you can see my friend sitting out on the rock on the left.

I wondered how a rock like this was able to survive the pounding waves that would no doubt topple it, and realized that they have placed a cement ring around the base. I had mixed emotions about this, but settled on it being a good thing aS it helps bring in some tourist dollars, exposes people to kayaks and provides a beautiful locale. 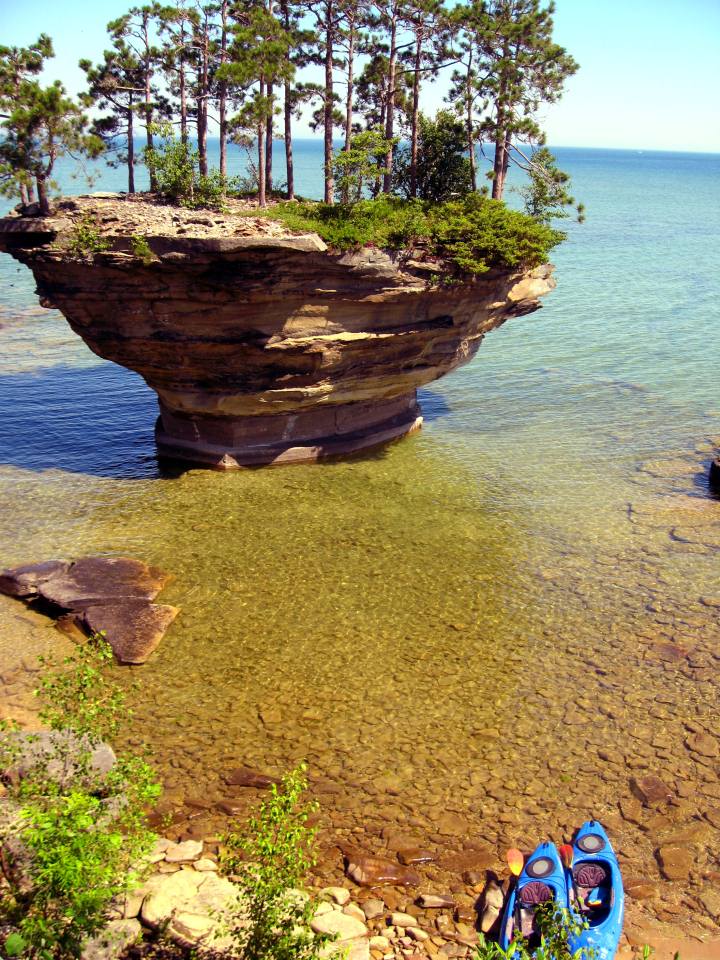 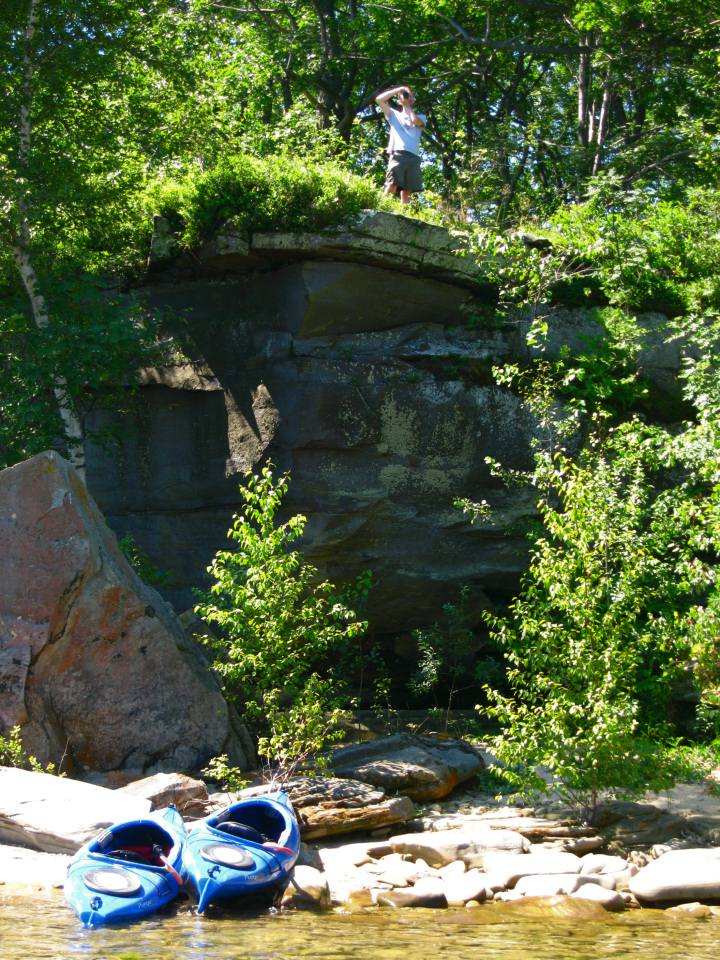 Along the cliffs were all these bird nests. I think they were swallows, but regardless I had never seen birds build nests in rocks like some sort of wasp nest. 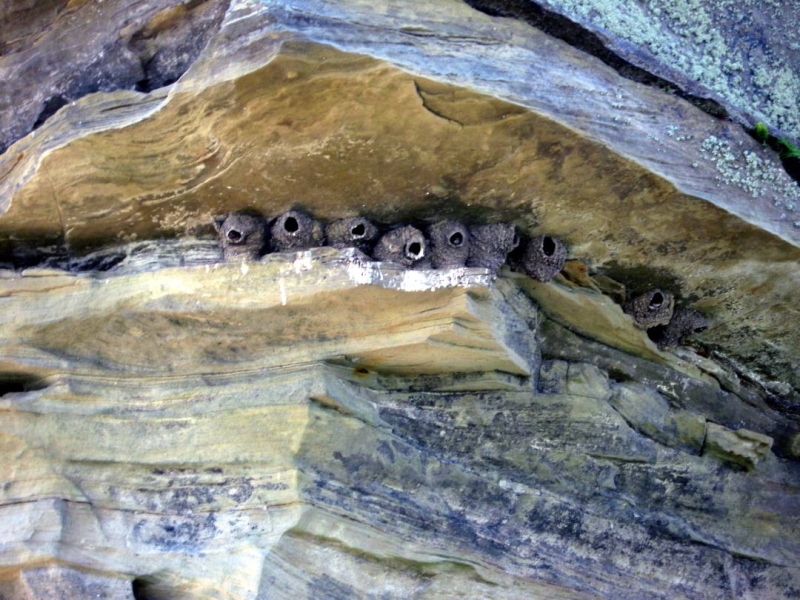 On the way back, I raced ahead as I could not stand the slow pace my buddy was keeping. I usually travel alone, probably because my desire to create my own schedule overrides my need to share the experience. When I got back and did not see him, I turned around and the location where I had been tracking him was void of life. I got out my binocular and could see him but it was unclear if he was paddling because still being in my kayak, I was moving a fair amount in the waves.

Eventually I returned downwind and this is what I found. 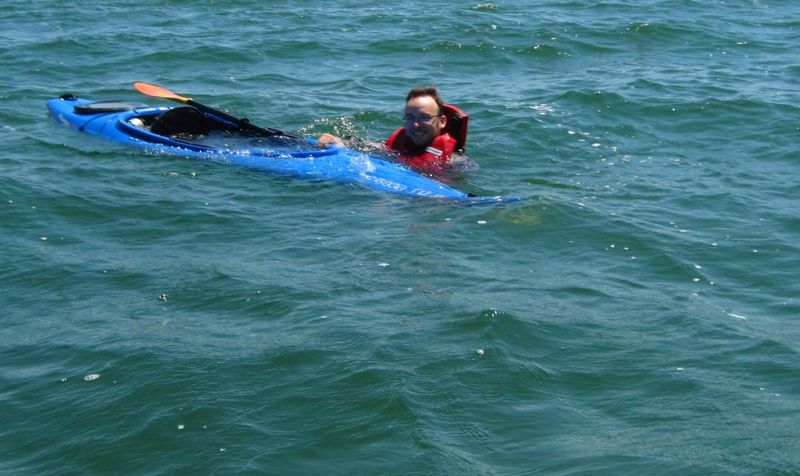 Apparently he had fallen out and basically sunk his kayak in the process. When I showed up I immediatly reached for my camera rather then helping as it must be documented. Apparently 2 kayakers came by and saw him but they were deaf. No I mean they pointed to their ears claiming they could not hear. This made this situation more hilarious as I wondered how their lack of hearing affected their sight. Did they just keep paddling thinking he was just enjoying a swim, or a few minutes down wind did one turn to the other and say, "See I told you that trick would work!"

Regardless I was having fun as he was trying to act like he was still in control, telling me to hurry up or they kayak would sink. I eventually put away the camera and tried to help him, but the kayak was too heavy.


The above is basically what I did, but my partner's kayak was sunk and we (he) were not strong enough to get the kayak across my kayaks bow, forcing me to jump in and pull it across my empty kayak. Once I drained his, I held his while he climbed in and then he held mine while I climbed in. I was a little too harsh on him during the rescue as I actually thought the kayak might sink and did not want his advice, rather to be quiet and just follow my orders.

I was not there when he flipped so I do not know exactly how he filled his kayak so fast. Here is a video of how to get in when you are by yourself.


If I was by myself and the kayak was basically sunk I am not sure if I could have done anything about it. I would not be able to lift it out of the water if I had no floating thing for the paddle and could not scoop water out as it was underwater anyway, just barely floating. If I fell out without the paddle float shown in the video and my kayak was empty of water I guess I would carefully try and climb up the back, but don't think that too probable. Rule here is, if you are kayaking alone, use a Sea Kayak where you sit on top. Also, do not panic.


After we got back I kept asking him if he was now resigned to be my servant for saving his life, but he declined. We watched the "famous" Port Austin parade. I kept getting this feeling like I was in the sleepy little town of Amity for the summer half expecting chief Brody to come running down the shore screaming shark as the town was straight out of Jaws.

Here is a shot of Miss Michigan trying to lean back and get a better look at me as she rolled by. 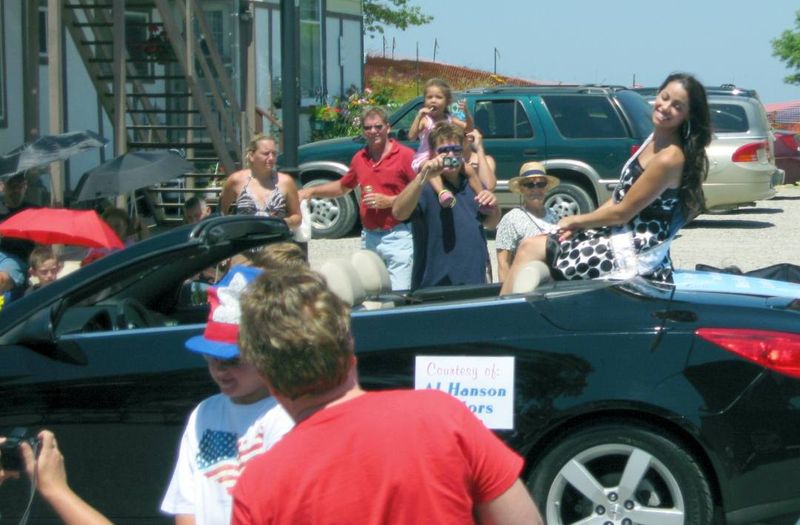 The parade was interesting to say the least. It consisted of a Sugar Queen, caged up livestock, Jesus making balloon animals and of course Santa Clause. 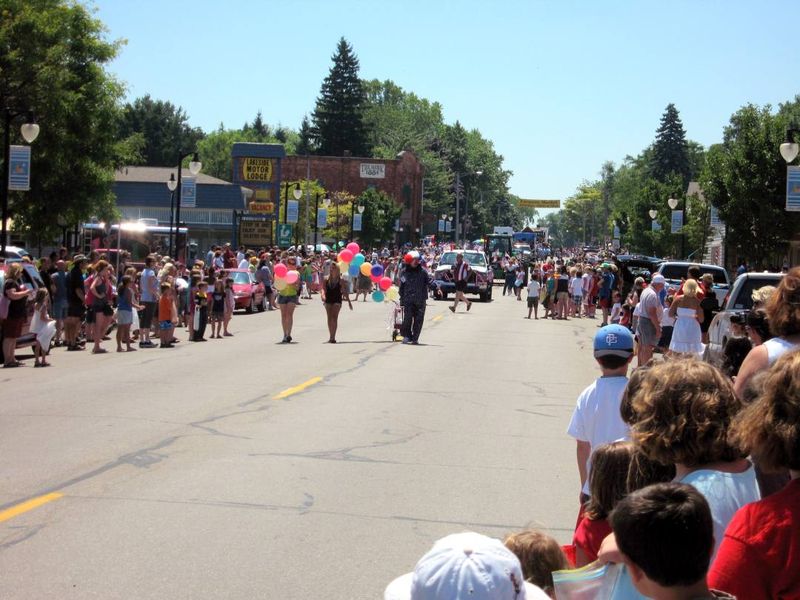 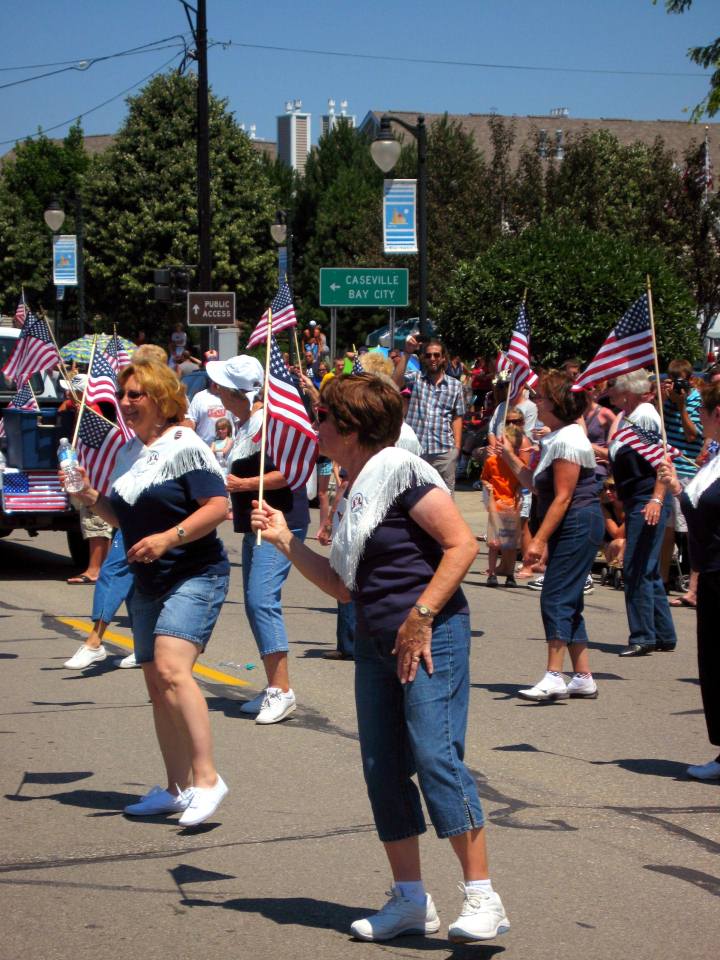 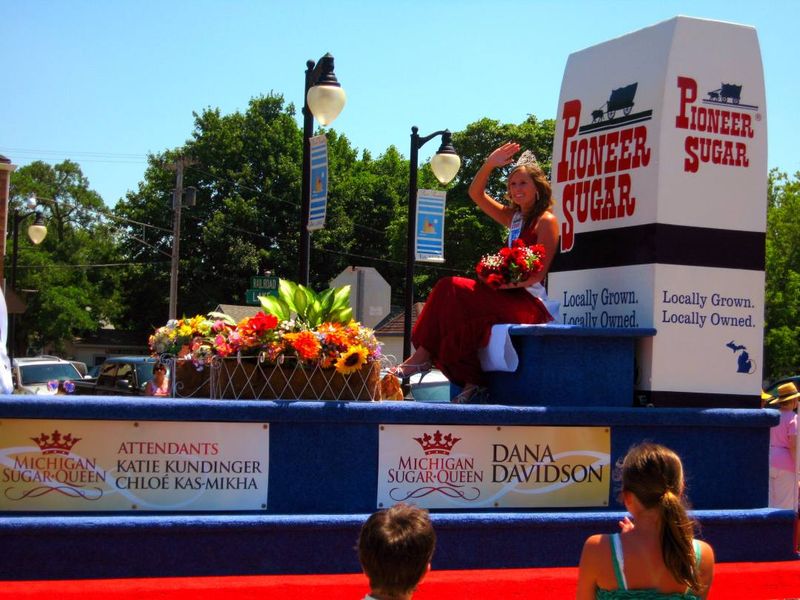 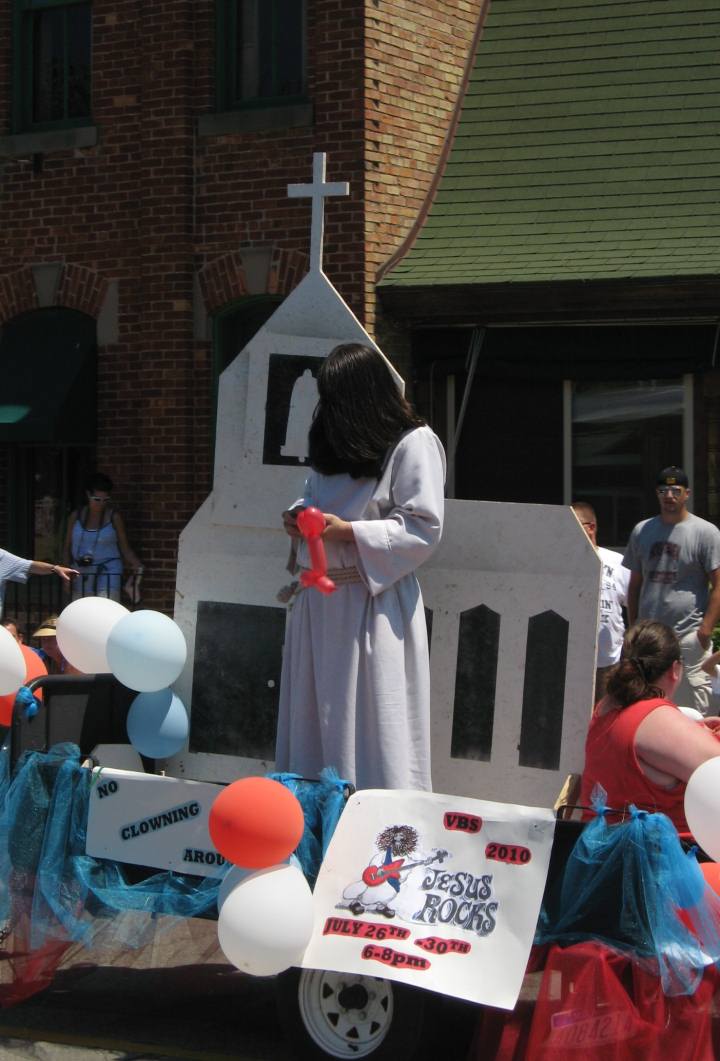 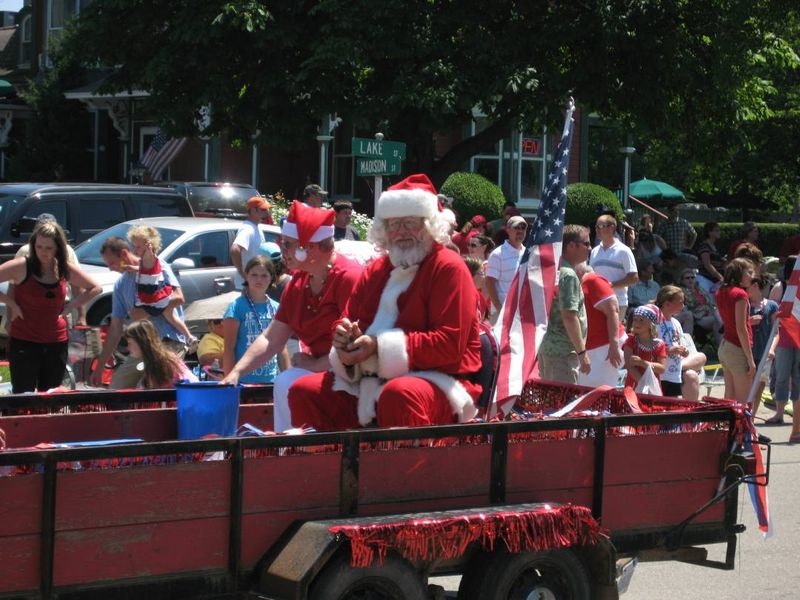 After the parade we entered a dark little tavern. I figured it would be rocking with all the expats, but it was full of toothless 60+ year old fisherman. We bellied up the bar and were immediately confronted with a cross-eyed local who has not been sober since we stopped harpooning whale for blubber. We probably still do that, but I mean the whole captain Ahab Nantucket-type stuff.

He was swearing up a storm and the victim of his abuse was actually a 5 year old boy sitting at the bar. The boys grandparents were getting a little pissed, but I really did not know which was more deserving of being removed in this situation out of the whole gang.

After a beer or two we headed for home. I was happy with the quick trip and recommend it for anyone that enjoys kayaking.

Link to Pictures From the Trip

Wow ! I really impressed by your photography. I like all the beach side photographs. Its looks so beautiful and lovely. The water is so clean and the place is really awesome.

There are so much beautiful scenario. I really want to go there. Thanks for sharing such a marvellous place photographs with us.