Driving Ms. Daisy Down the Amazon (Part 1 of 7)

This trip had been in planning for a little less than a year. My goal is to slowly chop the legs off the table and bring it crashing down. The table being a metaphorical South America, the legs being the metaphorical key attractions of said table, and the chopping action would therefore be the metaphor of visiting the legs. Pretty heavy stuff.

And what are those legs you ask. 1. Machu Picchu  2. The Amazon  3. Patagonia 4. Not sure.  Ok so maybe it only has 3 legs, and it is better represented by some sort of tripod. I digress.

Being an avid reader of survivor/adventure books, the Amazon has played center in more than a handful. To name just a few of the ones that have crossed my desk: The Lost City of Z, Lost in The Jungle, Running the Amazon, and the one I brought with me on this trip:

These books all shared the same theme, a raw, unforgiving jungle that yields many discoveries, but is also quick to swallow the adventurer whole, literally. Although we have trampled much of the Earth, this seemed like one of the last untouched places. Just before leaving I had read a news article of a group of tourist that were killed by natives, rarely seen, who were exploring a remote section of the river. I did not tell my parents about this article.

As with most people, I had not a clue how to start planning a trip like this. It is not like you are visiting a site like the Grand Canyon, where you know where you need to end up. The Amazon is the biggest river in the world, and you can pick it up in a number of places. It did not take long to determine that Iquitos, Peru, was the epicenter of tourist adventures. Now, the trick was getting there in an affordable manner and then selecting the outfitter.  Iquitos, if you are not familiar, lies along the Amazon in the country of Peru 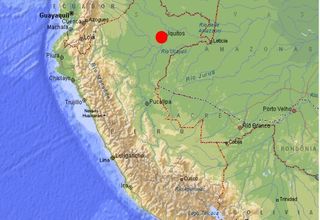 It is touted as the biggest city in the world that is inaccessible by roads. You must either fly in or come by boat.  I decided to take the less conventional route by arriving in Iquitos via a 13hr boat ride from Leticia Colombia. The traditional route is flying to Lima Peru and then to Iquitos. By following the route you see below I was able to cut travel expenses in half 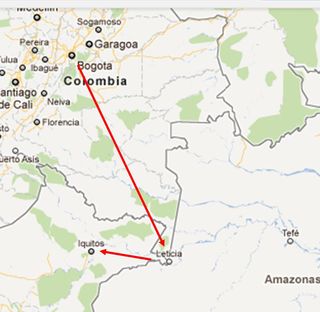 Now all I had to do was determine the outfitter. There are tons, but many of them cater to the wealthy traveler that is looking to float down the Amazon making a few stops at villages where people quickly don native outfits and pretend to start fires with sticks all while smiling at the cameras. I wanted something more authentic and hands-on. I was gunna get a good look at the Amazon itself from my 13 Hr boat ride, but I wanted to get back in the jungle and see how the people and animals actually lived when the cameras were off. I booked with a company called Maniti expeditions, based mostly on the packages they offered, the ease of use of their website and the reviews on TripAdvisor.com

Below is my planned Itinerary

Before I actually left I had to plan a few things. Although I am in the healthcare field and have my share of shots, I still had a few I had not received. Fortunately my insurance covered them or I would have had to make some tough choices. After a few days of poking I was covered for Hep A, Yellow Fever, Typhoid, Rabies, among others previously received. I also had some malaria pills to take everyday from 2 days before my journey until a week after leaving the jungle. Of course per usual, I was sick for about 3 days after the shots, which also happens when I get the annual flu shot. I seem to get sick more often then necessary.

As everyone knows there are tons of unique species in the Amazon. So I spent the last few days trying to memorize plants and animals listed here.

There were lots of communications sent back and forth with various transportation and lodging entities, causing much frustration, but nothing that would drastically alter my plans. So on a cold March morning I was whisked to Detroit airport and was off to Bogota Colombia for Phase 1.

I arrived around 2 pm on Spirit Airlines (always a gamble) and immediately changed some money over and went to confirm my flight to Leticia in 2 days time. I knew there was potential for roadblocks here because, since I reserved the domestic flight, the airline was purchased by LAN airlines, a major carrier. My familiarity with the casual inefficiencies of Latin America left me concerned. Fortunately the 4 girls working the counter were able to confirm and provide me a new ticket, along with laughing at my Spanish and overall appearance and behavior.

I caught a taxi to the Platypus hostel where I reserved a private room for about $20. 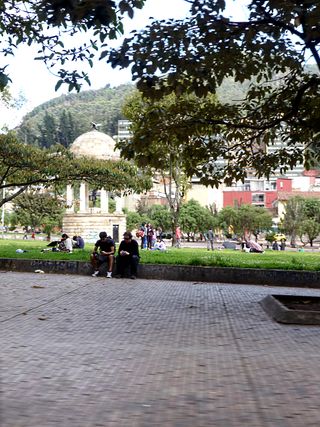 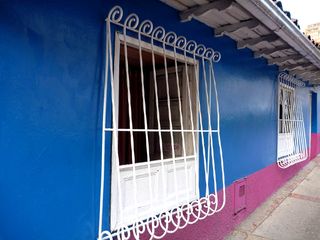 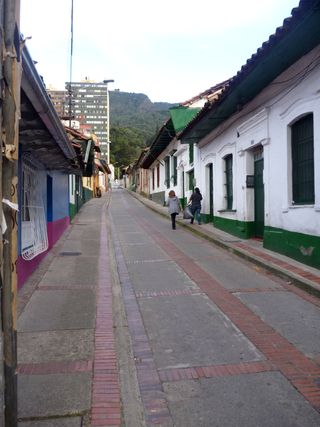 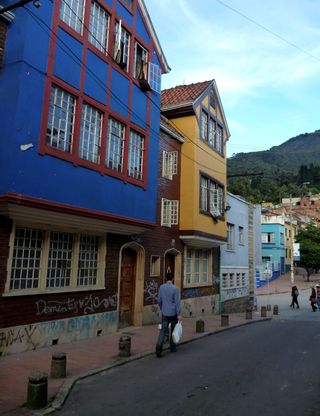 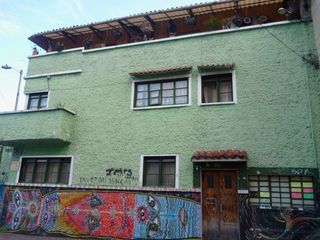 The problem here is that you want a hostel you can trust so you use a guidebook, but that is the same guidebook that every other backpacker uses, so you end up with a group of young Australians and Americans that are a little more into Peace, Love, and Drugs than you. If I ever spent more time in one location it would give me an opportunity to seek out a local hostel with a quiet family atmosphere.

Regardless, I unpacked, showered and hit the town for some exploring and dinner. I had been here in May with my brother (see earlier blog) and was amazed to see the same places we saw…like they were gunna change or something 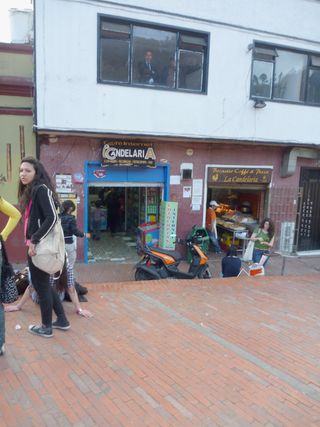 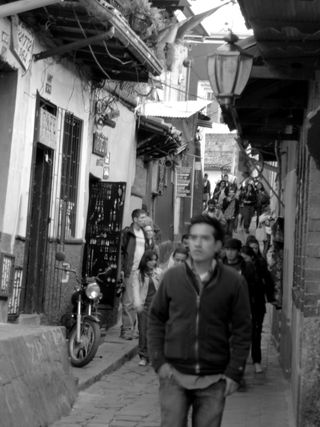 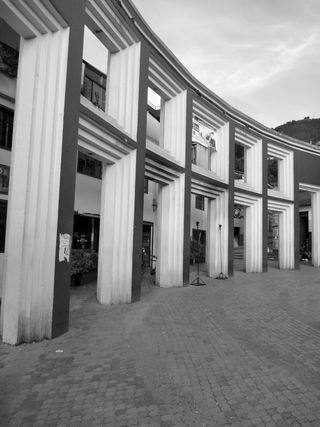 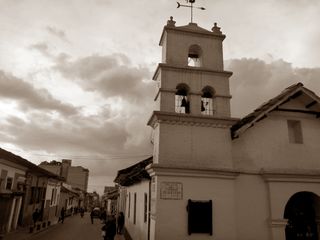 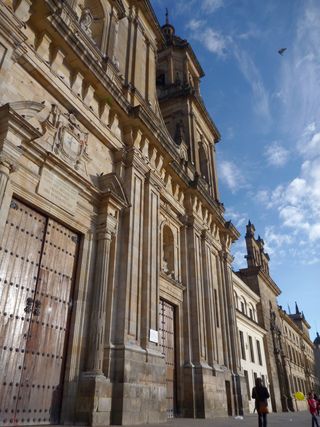 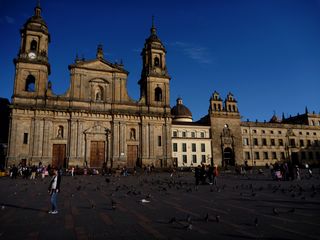 Here was a restaurant we ate at in Bogota last time. We ended up sitting here a few hours as we had a bus to catch late that night and nothing else was open 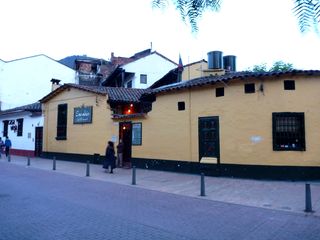 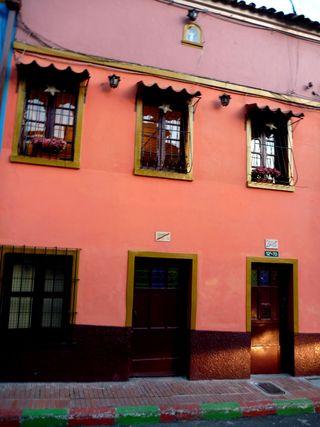 Here is the restaurant I stumbled into where I ordered some sort of chicken dish that was ridiculously cheap and amazing. 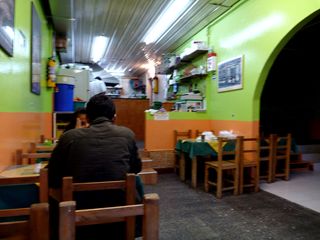 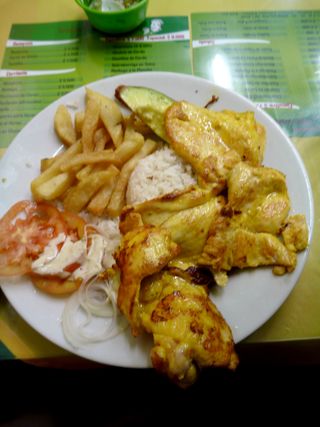 It was a long day, so I head back to the hostel as I had an early day tomorrow trying to deal with mass transit.

In fact when someone doesn't understand after that its up to other people that they will help, so here it occurs.