We checked out of our airbnb in the morning and dropped off the rental car at Cape Town airport. We took a short 2 hour flight East to Johannesburg on Mango Airlines. We rented another car, an automatic this time, and drove 4 hours further east. We had to arrive around 2pm at the Safari and did not want to cut it close, so tonight we stayed nearby in the town of Sabi. We checked into a cool Bed and Breakfast and after dropping our bags headed over to the Sabi Brewing company. The Sabi and Sands rivers are the life-giving blood to this region. 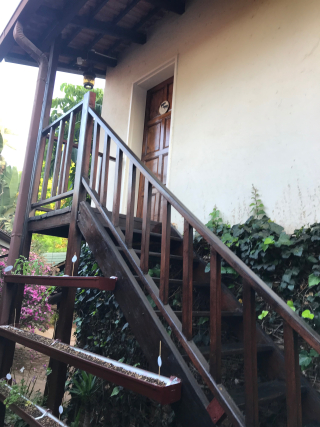 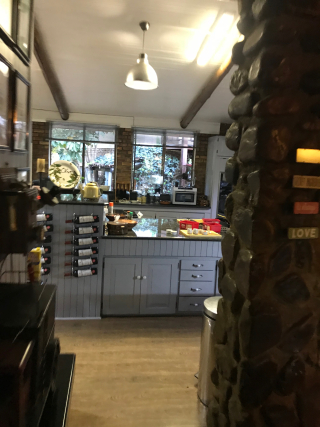 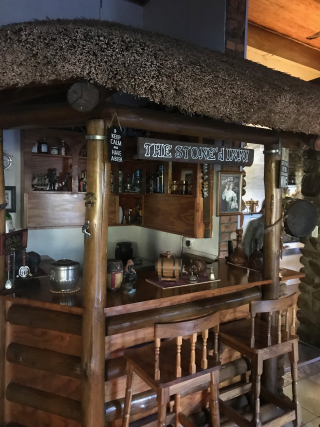 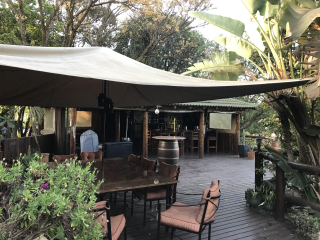 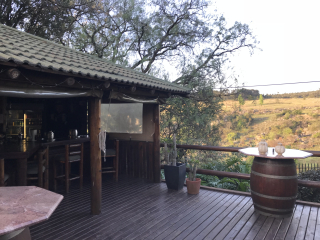 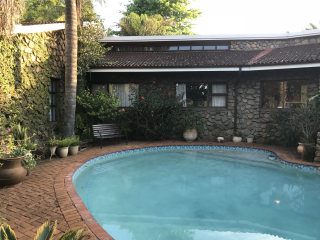 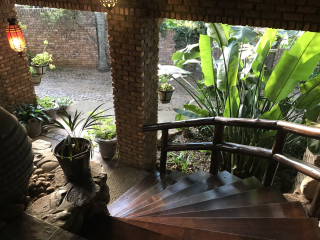 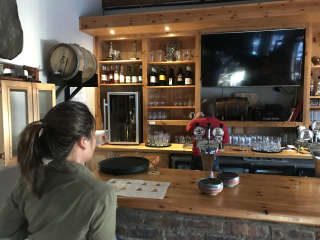 Back at the BNB we had preordered a meal earlier that day. It started with appetizer of Trout Pate and thin slices of Warthog, Crocodile and Springbok. 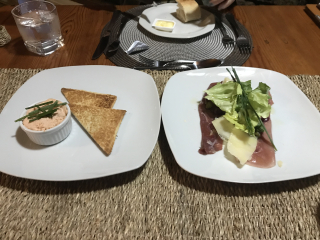 I had Bobotie for the main course. A spiced mince, an egg-based topping, and traditionally raisins or sultanas that are added to the mixture, all cooked in pot at the table. 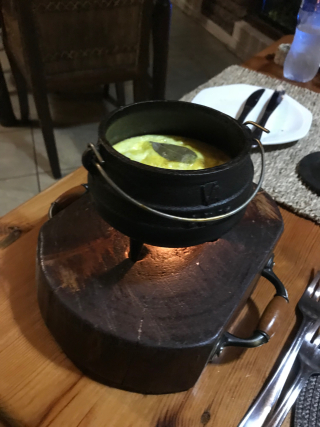 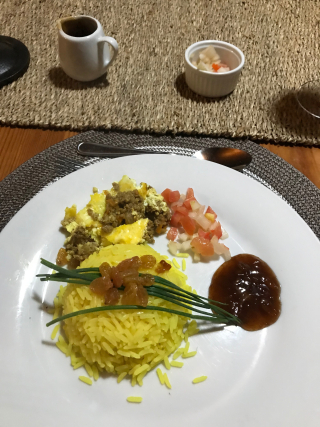 Amy had the stuffed trout 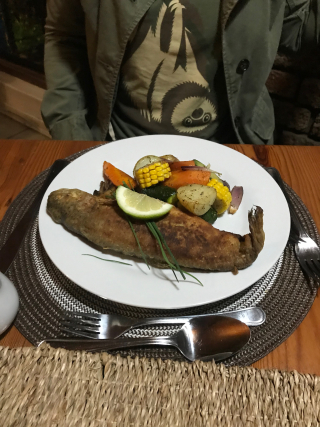 It was a long drive to get out there and I was asleep soon after dinner. I did not have to deal with driving up and down hills in a manual transmission, but that didn’t mean East South Africa did not have a few other aces up its sleeve. Along the road people were running across the highway in a life/death version of Frogger. We even saw a wildfire burning right up against the road. No police or fire department, just tons of smoke and flames. We were driving right next to a Gas truck and he smartly stopped before the fire and turned around. We risked it.

Instead of having one of their lanes dedicated to carpool lane, they have one dedicated to breakdowns. At first I thought it was stupid to have such a wide shoulder when you could add an extra lane of traffic, but soon realized it was necessary to keep traffic flowing as it was always filled with some ridiculousness.

The entire area surrounding Sabi was all commercial forest. Just acres and acres of Poplar trees.

After breakfast we headed to Glaskop to follow a bit of the Panoramic route along the Blyde River Canyon. This spot was labeled “God’s Window” 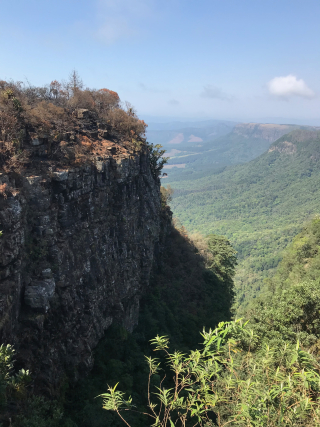 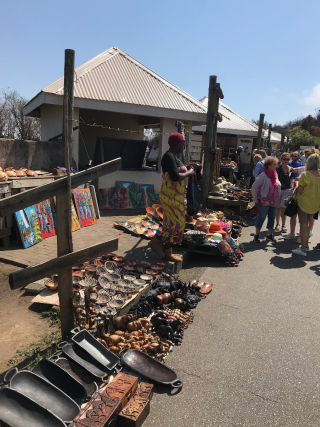 In Glaskop they also had a Gorge Lift allowing you to descend down into the canyon and walk around a bit. 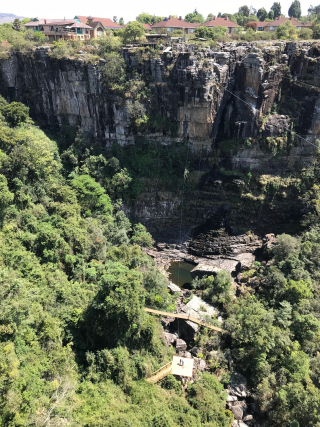 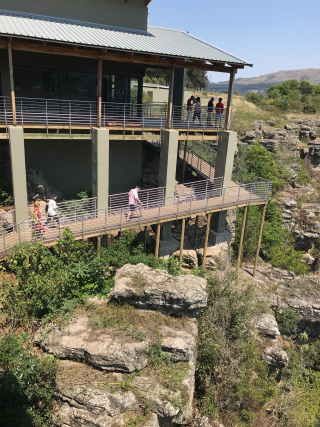 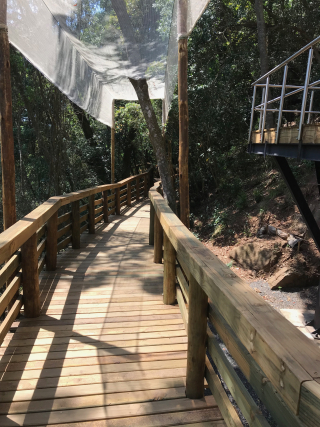 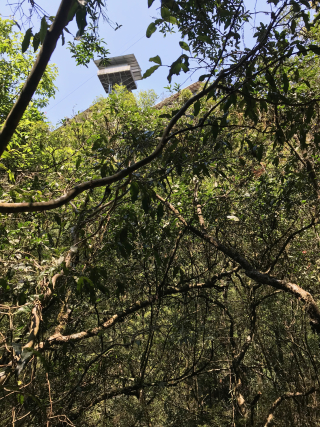 It was time for us to check into or Safari Lodge. We opted for Tydon Safari as our outfitter. I did some research on the matter before deciding. Here is how I made the decision. When you choose to do a Safari in South Africa you want to go in and/or around Kruger National Park. If you go into Kruger National Park you can drive yourself and stay in Park run lodges of various shapes and prices. If you want a guided Safari you go to a “Game Reserve” just outside Kruger Park. This allows you a more intimate experience as opposed to feeling like you are driving through Yellowstone National Park during Summer Vacation. You pick the game reserve that has the densest population of wildlife, or maybe you pick a few and visit each for a couple days to increase you odds. We found that Sabi Sands is one of the best game reserves. A Game reserve is a hundred square mile plot of land for example, that is broken up into a handful of private properties. These properties each build some sort of lodge and invite guests to stay and go on “game drives” 2x each day to see wildlife. You are not allowed to drive on other properties so you just hope that the animals are currently crossing through the property you selected while you are on Safari. These reserves do not allow hunting. There are separate hunting reserves setup for that sort of thing and obviously they have gotten a lot of media attention lately for allowing wealthy people to come in and kill an older Giraffe or Rhino.

So once we decided we wanted to be in Sabi Sands reserve we had to pick from 10-15 lodges. Most of these lodges have Spas, servants, champagne and air conditioned houses. Along with meals and game drives, cost about $1k/person per day. We did not need all that stuff. So I found a small operation that basically has 4 glamping-style tents and gives you a no-frills experience for about $250 per person/day. That worked for us.

We drove through the main gate of the reserve and had to prove we had an existing reservation at one of the properties. They also searched our car for weapons and bombs. Only then could we continue on the last 15km to Tydon Safari camp. The reserve itself is not fenced in, to allow the animals to roam free into the nearby park and pretty much wherever they want, but the roads are guarded to control poaching. You have all these people living just outside of the reserve in extreme poverty and it is hard for them to resist going in to snag an Impala for food or a Rhino to sell its horn to Asia for 100K dollars.

We started driving and had our Binoculars at the ready. Soon we spotted some Impala 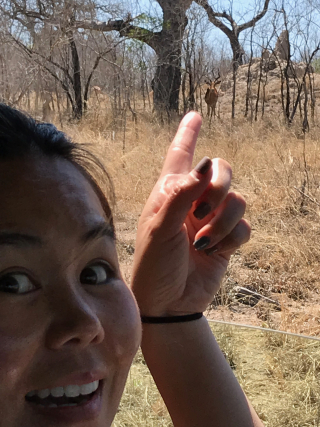 We must have looked like such idiots pulled over looking at this thing. People were passing us left and right. We didn’t realize that they were everywhere until later. In fact they are nicknamed “JAFIs” (Just Another Fuckin’ Impala).

We arrived at the camp and met our guide Jacques and a couple of the ladies that cooked and cleaned the tents. They gave us a tour and let us chill for a couple hours before the afternoon game drive 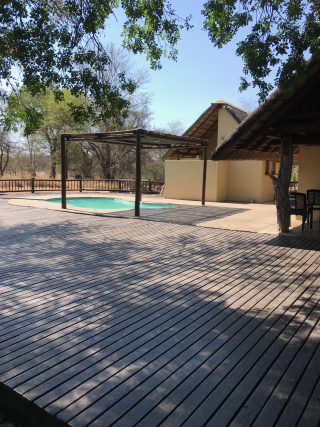 Below is a frog that seems tired of my bullshit 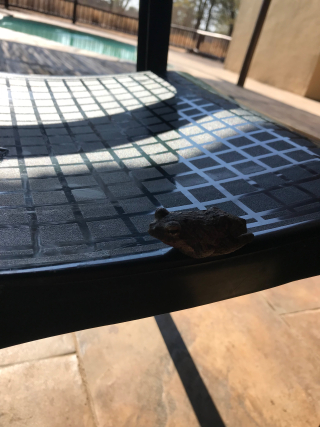 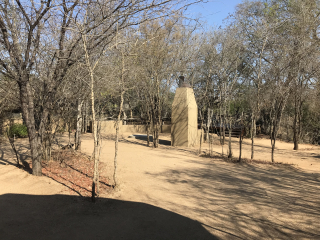 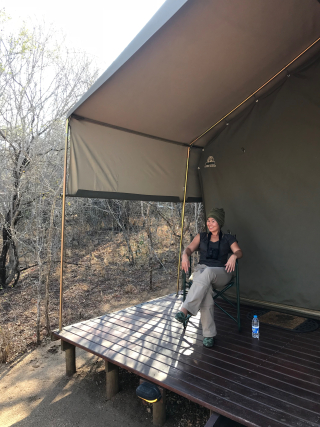 It was hot. I mean real hot. I would never want to be here in summer. I sat in the pool while Amy chilled on the deck and watched animals drinking at the nearby watering hole. 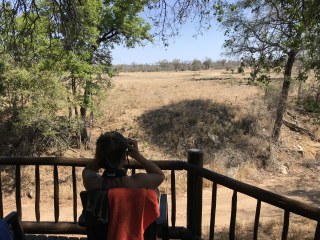 I normally end blogs posts at the day’s end, but I think I will end it here and have the next one being entirely focused on the game drives

Posted at 06:43 AM in AFRICA South Africa | Permalink

The comments to this entry are closed.