Up at decent hour, we walked downtown for breakfast. On our walk from the hotel to the main drag we took a Sky Bridge over some train tracks. A girl was getting professional photos taken on the bridge, and laying on the cement floor a few feet away was a guy passed out from the night before. We were all amazed that someone slept on the hard floor all night and by the fact he was still there at 9am. Usually when you pass out, you are up and moving by first light, but this guy seemed pretty content. We missed a golden opportunity to tag him with one of our stickers or at the least a group picture. We vowed to take the necessary action when we returned back to the hotel, but alas he vanished into the ether.

Before joining the official BDR trail we stopped a local hardware store to pick up some aftermarket seat cushions. 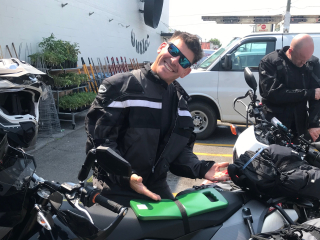 These bikes are a little firm in the seat and the added cushion helped keep us happy.

We climbed into the Washington National Forest at the tail end of the Appalachians. Once we got to Newport VA, we stopped at a gas station to fill our tanks. My tank was always the limiting factor. It held just a couple gallons, lasting for about 2 hours of riding max. Everyone else had larger tanks, so in an emergency I brought tubing to siphon into mine and we also had a small fuel canister. We never actually needed to do either on the trip because the gas stations seemed to be spaced out nicely. We also dropped the tire pressure to give us a little more friction on the dirt roads.

Within a few minutes of riding we came upon the Mountain Lake Lodge. Its claim to fame is being the filming location for Dirty Dancing. Being a group of guys, we really did not know too much about the movie or have much interest in revisiting spots from the film. It was a nice location for a weekend getaway from Roanoke. 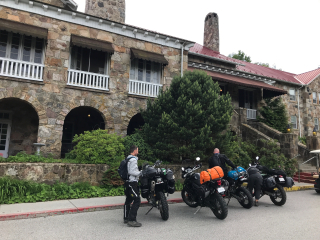 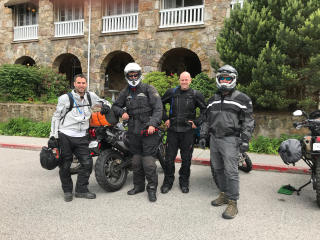 After leaving the Lodge we got into some gravel along Tub Run Road. It’s a slim, super snaky and slightly technical trail. Most of the trails we hit were gravel. Some were packed tight and some were real loose and deep. 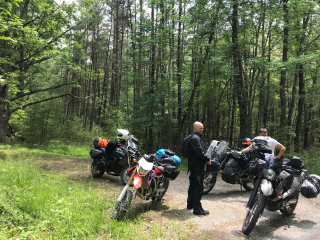 Everyone handled themselves well. Since I had a lighter, more maneuverable bike, I was able to move a little quicker. I felt that it was actually easier at higher speeds. It made a smoother ride, but left you with a higher potential for catastrophic damage if you did crash.

We stopped in the town of Covington for supplies. We were about 20 minutes from our campsite at Douthat State Park so we opted to skip the meal and just wait to we set up camp. Things got a little squirrely here. We filled up on gas and asked a guy where a local liquor store was. We were told we had about 1 hour before the store closed. He was a southern man who had a lot of local color to his syntax. I may have given up on him too early but I discounted him immediately, treating him as I do most people I meet, “Assess and dismiss......assess and dismiss” Joe headed off where he thought was a state owned liquor store, but with me in the lead I went the wrong way. Rob was following us but as we started to go off course he stopped as Chris was still back at gas station trying to decode the cypher the attendant was emitting. We eventually all got back together and Joe loaded directions to a liquor store on google maps. I mounted his phone and took off. All the while, Chris is telling us that he had figured out the code, but Joe and I had already written him off. Rob was indifferent, he just tried to stay in formation. I led us through back woods and wrong way streets. There was no way this was accurate. I ended up in front of an old barber shop and the guys pulled up, “Here it is guys, what kind of Bourbon should I get?” I was joking since the liquor store was turned into a barber shop years ago and said barber shop had been further turned into an abandoned building at some point thereafter.

We only had about 30 minutes left on the clock. We drove through an abandoned small town, fanning out, stopping anybody to ask where a store was. We were told the end of the street. That was a dead end. Everyone was now frustrated with the situation, each other, and the entire town of Covington. We circled back and were trying to find directions to a Walmart which we heard had a liquor store near it. I was slowing down and some drunk guy came out running out of his house giving me a thumbs up. He was so excited that I stopped, “Hey man how is going? Cool bikes!”  I asked him directions to Walmart and he gave me some vague directions. I would try and fill in the blanks by asking things like, “So I turn in two blocks? And I am looking for it next to a Wendys?” The answers I would get were not reassuring…”sure, that sounds good….just go down a ways and you will see it alright, don’t you worry.” He did not appreciate that I had 3 angry men on bikes behind me and any slip up at this point would be laid at my feet and I would be run through if I didn't deliver. I closed the conversation with, “How long will it take to get there?” He then said, “1 hour”.  1 hour! Wtf is he talking about? I asked if he was serious and he sheepishly responded, “30 minutes…..10 minutes” hoping I would like those answers better. I immediately realized I had placed my trust in an empty vessel and we were screwed. We headed back towards the freeway, and happen to pass the original gas station. I honked and waved hello. We pulled up to a bar and I asked where the beer store was? He said, “We got plenty in here?!”  He eventually told me to get back on freeway and go one exit and get off and you will see it from freeway. I convinced everyone to give it one last chance and when I pulled off the freeway there was nothing. Dammit!!!  At this point we were breaking every traffic law and were not staying in formation, except for Rob. I headed one way over a median, Joe burned through a red light and Chris u-turned and hailed down a car. Rob stayed put. We finally found the Walmart. It was past a Road Closed sign hidden behind a forest. It was the most inconspicuous Walmart you could image. We arrived with 6 minutes to spare. We loaded up on alcohol and food from the Walmart.

20 minutes of highway time until the campsite, loaded up with food and ice. Our bags are usually stuffed, so when we stop for dinner/supplies we end up affixing these extras to the bike in any random unsafe fashion. Sausages hanging off the exhaust, bags of ice tucked into a jacket. Fire wood strapped to the rack.

As we got closer to sundown it started to sprinkle a bit, but only just as we pulled into our lakeside campground. We lucked out with a primo spot. Dropped our gear and rode back to pay for the site at the registration office. Turns out they had plenty of Ice and firewood there, but where’s the fun in that?

Booze flowing and sausages on the grill. I ate one of the sausages that dropped into the fire, hence the name, “Gravel Dog” it sounded kinda badass, so I ate the sausage more to acquire the nickname, not because I was actually that hungry. We fell into our separate routines without missing a beat. Setting up our tents, drink in hand before settling by the fire in our REI camp chairs listening to Bob Marley music. Rob’s chair had a busted leg on it that got worse as the trip went on. It was rated to 250lbs and Rob claims he was under that limit but we were not so sure. We all wondered how it would go when he tried to return it. “Sir this chair is rated only to 250lbs.” “Yes, I know that….(awkward silence)” Sir, we are gunna go ahead and ask you to step on this scale over here.” “What kind off…I have never been so insulted my life. What are you implying!?...I will take my business elsewhere. Good day sir!” 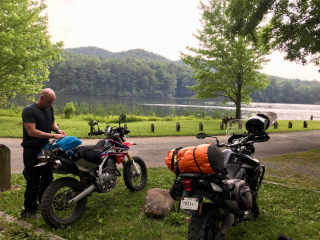 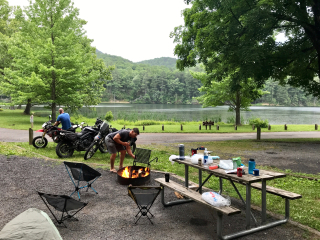 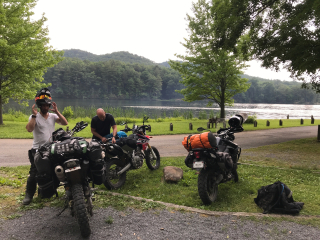