Today we were working our way East towards Harper’s Ferry.

We were finally getting in the groove of riding together. Not long into the day we ran across this old barn 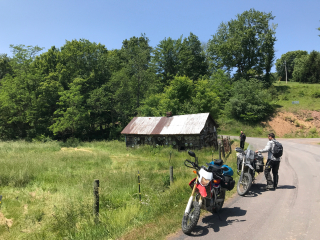 As we got closer we saw it was covered with old license plates, and one of them had the BDR sticker on it. Of course we had to tag that. 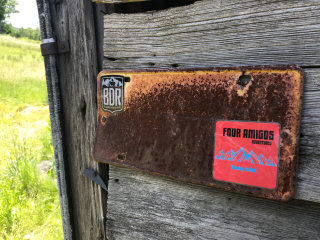 I ended up tearing one of the old WV plates off to take with me as memorabilia. I always try and bring something home from each trip. Now that I found something for this trip I could stop stressing about that aspect of the trip. I am currently working on mounting it with some stickers and pictures from the trip.

Next up was an old toll bridge 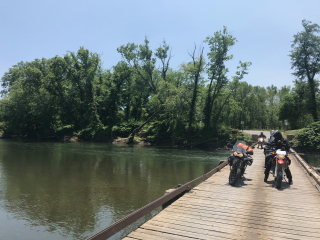 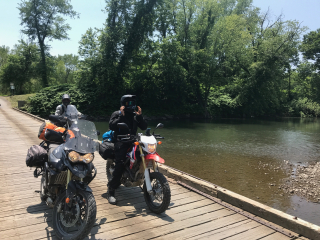 We all watched the video of the Mid Atlantic BDR so we were familiar with this being on the route and that it was one of the oldest privately owned toll bridge still in existence. I think it was $.50/person to cross.

We had a few miles of freeway riding before getting to our campsite for the night, so we stopped at an exit for gas and lunch 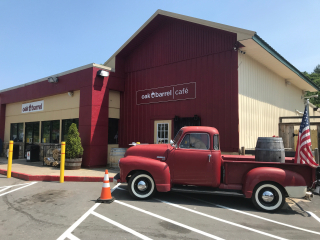 The Oak Barrel Café was attached to the gas station but better grub than you would think for a truck stop. While we were filling up 2 guys decked out even more obnoxious than us in Dualsport Adventure Gear came up and asked if we were headed north or south on the trail. I guess it was obvious we were not on a day trip. We had not seen any riders prior to these guys on the trail, but quite a few signs welcoming BDR riders and asking drivers to watch for motorcycles. These guys were in rough shape. They had started in NY and on day 1 their navigation had gone out. They were using the BDR map, with is a nice overall summary of the route but by no means an official road map. I don’t know how they could have followed any of the route to tell you the truth, unless they were just hitting the paved road sections. They were hoping we were going the same way and could tag along with us. I was glad we were going the opposite way. I did not tell them that we were not using GPS, and that they could easily download the route on their phone and follow it. I did't have the 3 hours to spare required to get them up to speed. It is really their own fault. Who comes out on a week long trip and has no backup. No alternate GPS, phone apps, hard maps, or roll chart. Maybe I overdue it on planning, but they seem like they just woke up one day and decided to head out on the trail. Don’t get me wrong, impromptu adventures are fun, I don’t let myself do enough of them, but these guys were idiots. 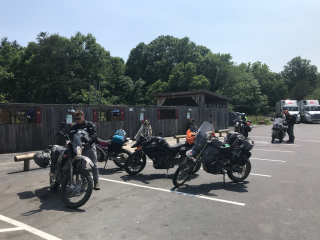 Not soon after we arrived in Antietam. Antietam was the bloodiest single day in the civil war. With around 25K deaths. We grabbed our usual supplies a couple miles from the campsite. The sites were buffered by the C&O Canal on one side and the Potomac on the other. 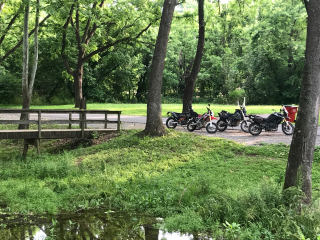 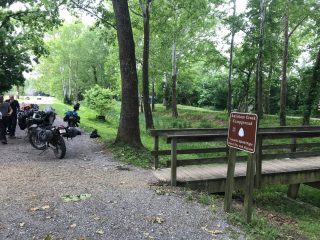 There were little bridges that crossed from the road over the canal to the campsites. Joe and Chris knew from dealing with the canal back in DC that you could not have motorized vehicles on the other side of the canal, but there were no signs so we took the bikes over and parked them right at the site. 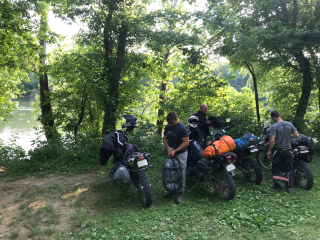 Not soon after, the camp host came by and told us we had to move our bikes. We gave some BS reason why we couldn’t and finally convinced him to let us keep them there overnight, promising to move them at first light. He was a talker, so we put Chris on the job and those two became fast friends. It turns out it was a good thing we did move them in the morning because 2 rangers came by early that morning and if they saw our display would have hit us with some serious fines.

We had a nice night along the Potomac, wish we were closer to water level as opposed to 30 ft up on the bank, but the ability to have a swim before dinner can’t be beat. That night we continued our meat focused dinners. I don’t even know why I brought dehydrated meals. As long as we had Liquor, cubes, wood and meat we were solid. The 4 basic survival needs. 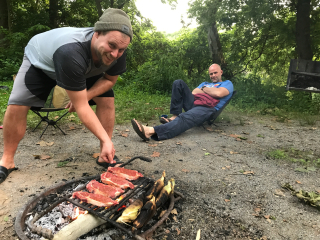 I think we were over served that night because at some point I pulled out my buck knife to grab the meat off the grille and the next 30 minutes turned into a photoshoot of 10 year olds playing with a knife, devolving into dramatized sequences of Deliverance. 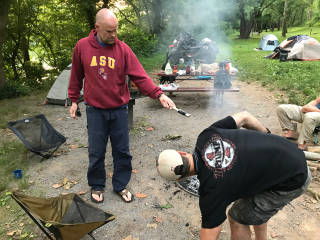 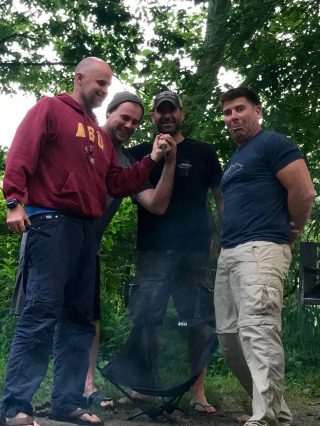