The next morning I decided to break out the TW200. If you saw the first pictures of this trip you will notice that I attached a whole lot of crap to the outside of my Jeep Compass. It was suggested I bring a 6ft trailer. I did look on craigslist for one, but did not see one I liked for the right price and there is no way I would buy one new. I was not overly keen on a trailer anyway as I felt it would be a pain to park and just add stress as we worked our way through major city expressways. My solution was to bungee cord everything to the car. Cause that didn’t add a lot of stress, right.  I had a little hitch with a ramp that allowed me to load the dirt bike flush with the back of the car. There was a process. I had to have the trunk loaded and definitely not need anything out of it during transport cause once the bike was back there, the trunk was pretty much inaccessible. Once the bike was loaded, I had to also bring our bicycles. I thought of getting a rooftop rack for bikes but that would be another couple hundred as the Compass had a shitty design for stock roof storage. I also needed the roof space for our excess luggage. So I ended up just strapping them to either side of the dirtbike. This completely blocked the tail lights so I mounted some new lights on the hitch rack to avoid someone from plowing into the back of me. 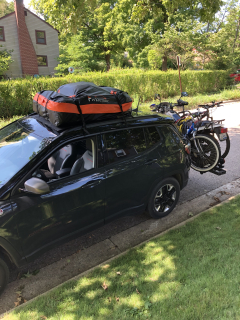 All this was sitting on a 3ft bar extending from hitch. While driving, every time I went over any kind of bump I looked in rearview and saw the hitch bounce independently and I would grimace like I had just ran over a squirrel in the road. I would say that while driving, 30% of my brain was stressed with thoughts of a bike coming loose, or the entire hitch sheering off, jettisoning the entire ball of fun down the freeway, and me having to determine whether to pull over or just keep driving happy to be free of the burden. If you look at the picture, you will notice I have not yet addressed the black and orange body bag on the roof. We wanted more space in the backseat for the dog so that meant all luggage needs to go outside. I originally looked at one of those Yakima capsules that resembles the Cocoon they put Spock in when they shot him off to the planet to be reborn, but it was expensive and as mentioned above required buying some excess racks. This was a lease car that was due in a few months so I was not spending more than I had to. I found these bags on Amazon for $50. You basically just throw everything in there and drag it onto the roof, zip it close and buckle it to some tie downs clipped to each doors frame. Now there is debate on whether to load the bag on the ground or on the car, but with how tight I wanted it to create less drag, I would probably fallen off the roof trying to muscle it closed. We dragged it onto the roof (yes we brought more stuff than we needed. I would say 70% of stuff we brought never saw the light of day) and after a few test runs with Amy following me and in front of me I got a recipe that seemed to work. I was quite surprised we made it to Maine without getting pulled over at least once. I envisioned the conversation with the trooper in my head, “Do you think this is safe or legal boy?” I would respond, “You just try and peel one of those bikes off of there. Tight as drum officer.”

Where were we. Oh yes, the dirt bike. I decided to go exploring for the day. I brought ample safety gear and took my GPS along to give Amy frequent pin drops as to my location. I used my Rever app on the phone for turn-by-turn navigation. The last couple off-road trips with the boyz had honed my route skills as to what could and would go wrong.  I even made and emergency box to strap on the back. Complete with siphon, fuel, rain gear, straps, jumper cables, tire slime and inflation. 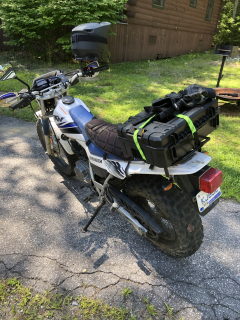 I had a few routes downloaded, but a trip to the outdoor outfitter the day before had given me a lead on a mountain road that seemed promising. I was alone so really should have kept my danger level at DEFCON 5, but I got going on this mountain rd and before I knew it, as it always does, the road disintegrates into grave, then dirt, then boulders. 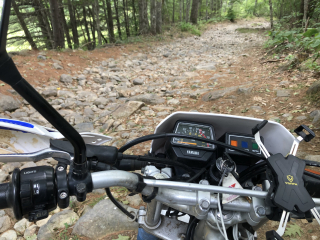 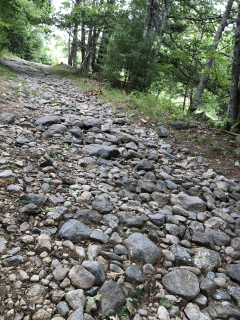 Eventually I came to my senses, and turned around and found a trail carved by utility workers servicing the electric poles 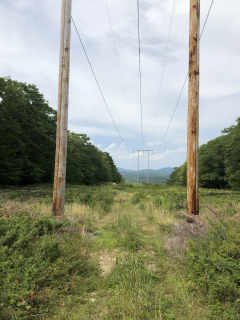 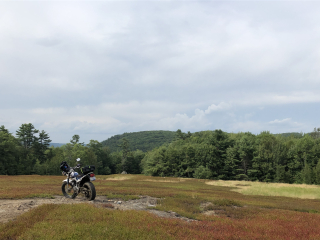 It was cool. On all my previous rides, I had borrowed or rented bikes, but this time I got to take my own out on the trail. She is small and not overly powerful, but hard to break and even harder to hurt oneself as she goes all of 65mph and seems to be only 2 feet off the ground.

I survived and made it back to the cabin. It is nice being out in the wilderness a bit, because all the roads are 2 lane roads and speed limit is never over 50. So I don’t have to find my way around a bunch of freeways, because me on the TW, on a freeway, should never happen. 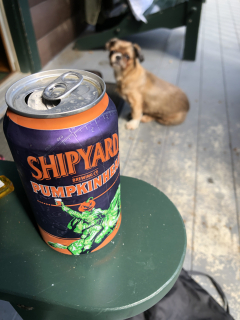 The Next Day was the 7th Annual Lincolnville Swing Ding! We saw signs along the coastal road all week for the big event. We were excited. It is amazing what you look forward to when you don’t really have any plans. We got up at 8am and headed to the town beach parking lot where we found 4 blue haired ladies and a folding table selling painted rocks and cartons of blueberries. We were too embarrassed to even stop so we drove past pretending that we were never really interested in the first place.

We did a short 3mile jaunt on Fern Neck Loop. I of course brought my swim trunks and stopped halfway for a dip. On the way back, we did stop at the Swing Ding and picked up some blueberries for pancakes in the morning. I could not bring myself to buy a painted rock, even if it was to support the local auxiliary.

We came back and I loaded Max in the bike basket for a ride on the bike I bought Amy a couple weeks ago. I still was not sure why I decided to load a $50 bike to the car and drag it around the country. The basket works well. As we had been riding it in Michigan on some paved trails. He seems to like it, but really it's hard to tell because his collar is clipped to the basket so he cant jump out, or really move much at all. He just looks back at Amy, saying, “I am a prisoner in this death trap. If you crash, we crash, so please don’t crash” 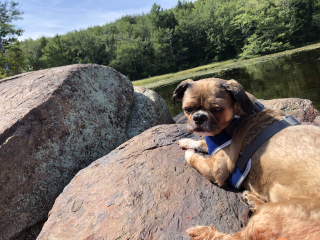 The following morning I got up before dawn to go see sunrise at Ducktrap beach. I grabbed a chair and some coffee and enjoyed an hour of tranquility 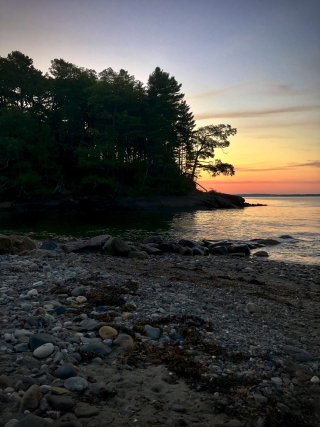 It was a Monday morning. We chose to drive an hour up to Bar Harbor and Acadia NP today, trying and avoid the usual summer crowds. I had been here before (link), but Amy had not, in fact this was her first National Park ever. Current count has it at 60+ in the US. Our plan was to take the bikes and ride the old Carriage Roads through a section of the park. Just like the name implies these paths were originally used by horse drawn carriages over a hundred years ago by the likes of the Rockefellers. I was thinking they would be flat, but no dice. We parked at Jordan Pond and aimed to make a loop around a couple larger lakes. It was tough uphill from the start. I was ok with it, but Amy’s bike only had one gear and even I would have struggled. We walked the steeper sections but made great time on the downhills. There were people in full bike gear blazing through at 30 mph. This is supposed to be family-oriented leisure rides and we almost got hit by passing freight trains. 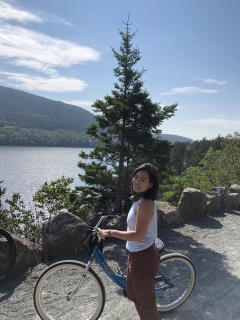 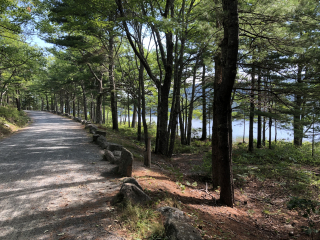 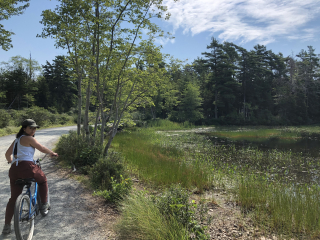 We got back to base and had lunch at Joran Pond House. Their claim to fame are these pastry popovers. Basically just a croissant, but the view was worth it from the lawn. 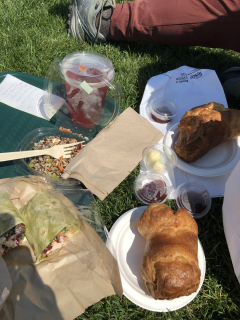 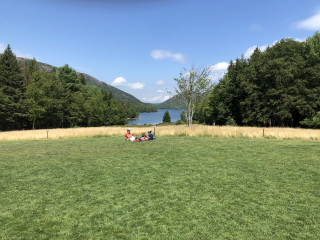 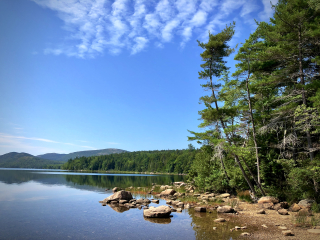 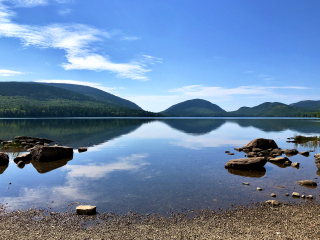 It was crowded. We had to wait an hour to get food. I had never been to a National Park in the summer and this was the reason why. They said because of COVID and the lack of cruise ships, the numbers were down over 50%. I would go insane if I had to try and hike with crowds like that.

We took a 4 mile loop around the pond. It was just too tight of a trail for 6 feet separation. 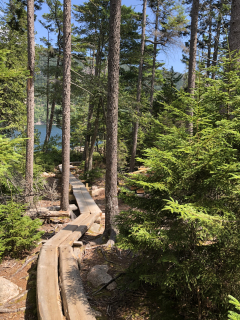 Some people had masks, some people didn’t. Each person had their own comfort level on what a safe distance was when hikers tried to pass. It was mess and distracted from the beauty of the surroundings. 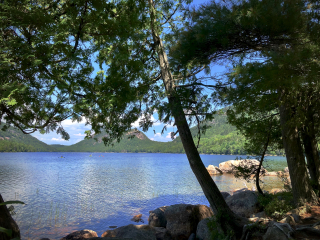 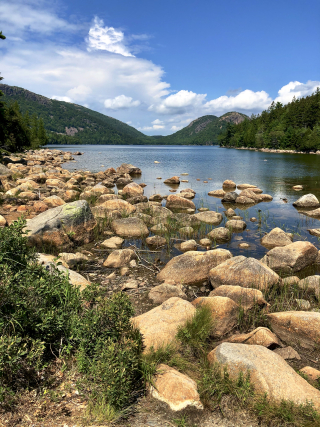 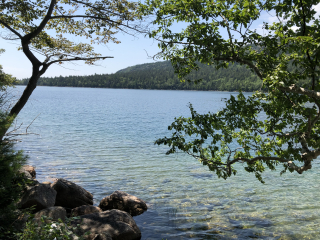 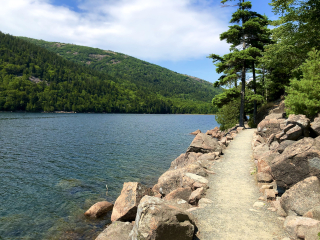 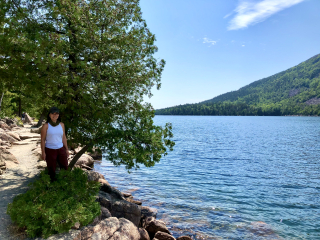 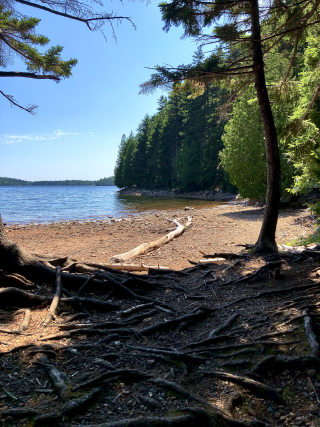 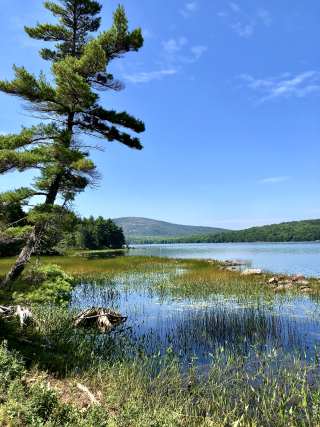 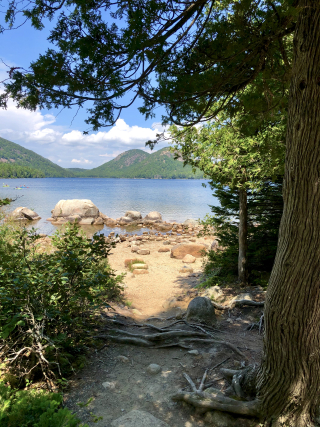 I did my best to get pictures without crowds so you really cant appreciate the chaos. When we got back, I fired up the grill and cooked steaks and we ate by the fire. Even now, writing this blog entry, I remember those nights in our little community fondly. People were friendly, waving as they walked past. It felt like you were in Pleasantville 1950s. 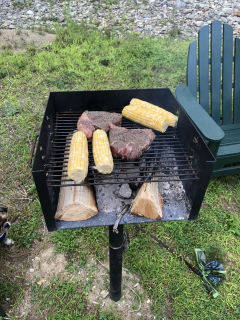 A false sense of comfort while the outside world was in a dumpster fire.