Hail to The Green Mountain Boys: Vermont (Part 1 of 4)

We just left my friend’s cottage in Maryland and on our way back to New England for a month in Stowe VT. The trip was uneventful, except the usual storm we seem to drive through on each leg of this voyage.

We rented a stand alone cottage on a farm a mile outside downtown Stowe. 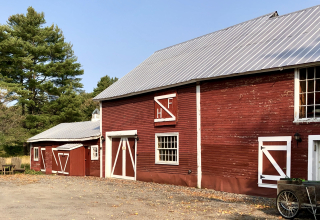 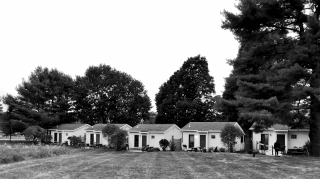 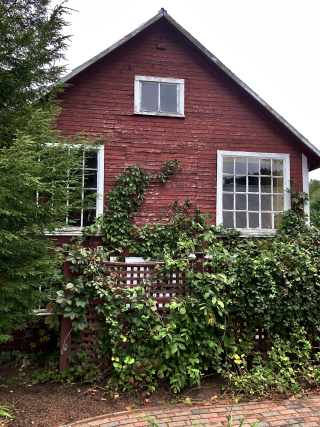 Ours was called the Spruce Cottage pictured below. 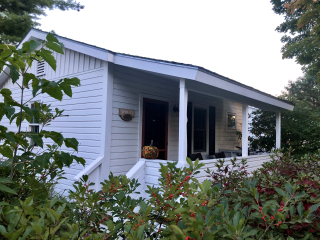 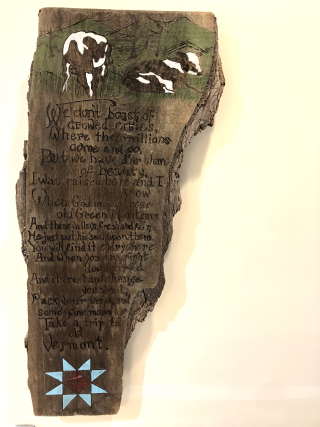 The owners were a couple with 3 kids who normally rent out the cottages and the main house and spend the winter in Florida, but this year they felt safer staying put in VT. And that was probably a good idea based on what we would see in the coming months as our travels took us south. Although VT probably has the lowest COVID cases in the country they also practice the most vigilant precautions. I am sure those 2 things are not unrelated.

Similar to Maine, they contact trace at any restaurant, and no one walks around without masks, unless they happen to be visitors from out-of-state.

We were excited for the start of Fall and looking forward to the color peeping that brings everyone to VT this time of year. You would think our first order of business was groceries, but priority was visiting the Ben And Jerry headquarters in nearby Waterbury. Although tours were not active we still got to order from a long list of flavors and visit the “Ice Cream Flavor Graveyard” where flavors go to die 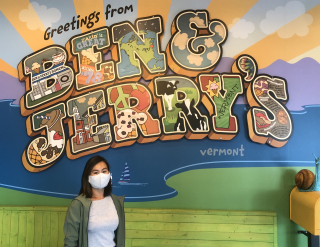 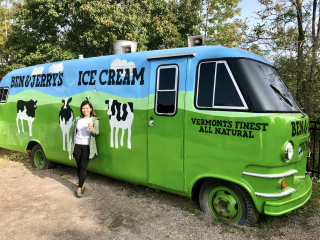 Next, we hit up the local grocery store. While Maine was all about Hannaford’s, here we were focusing on Shaws. We were getting better at grocery shopping. We were still not efficient as back home when I made a crock pot meal and lived of it for the rest of the week, for every meal. But, we downloaded the store iphone apps, enrolled in the frequent shopper discount and clipped our coupons before heading out. I never thought about it till now, but we were becoming housewives of the 80s, upgraded to the digital age. We were still spending too much on food each month, but we also wanted to enjoy the local fare and not be excessively anal about our budgets.

All my hiking, biking, and riding apps worked great last month so I had created a master list of outdoor attractions and was ready to hit the ground running. Across from our place was a “Quiet Path” It was meant for dogs and people to roam. It snaked around the back of town and through corn fields. It was a beautiful location along a meandering river, but in a few weeks we surmised it was the source of major hardship for one of our gang. 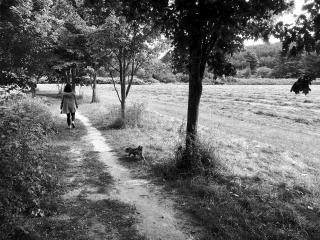 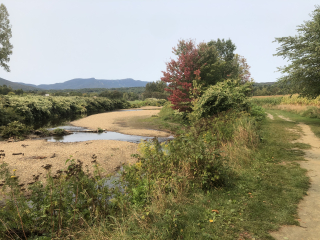 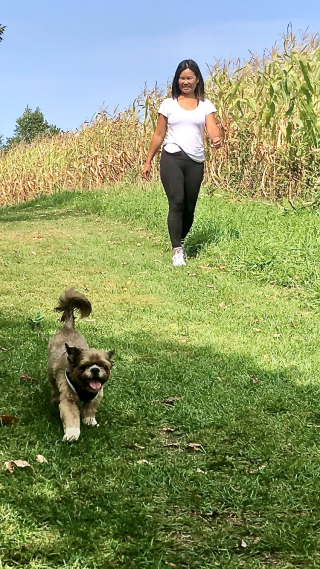 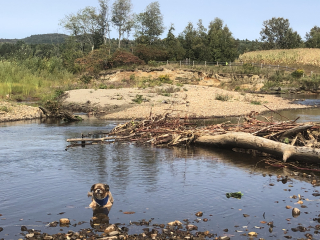 In addition to this walking path, there was also the Stowe Recreational Path. 10 miles of biking along the same river and out up the mountain road. 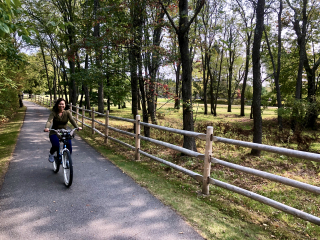 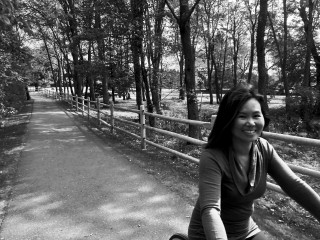 After sampling a bit of the local exercise opportunities we went to investigate an indoor swimming pool. I had not been able to swim laps for over a month and find it the perfect way to start the day. Stowe had a place, The Swimming Hole, which looked perfect for swimming. It had an attached gym and with only about a handful of cases each day in the whole state we felt fairly comfortable giving it a shot, while still masking everywhere but in the water. They provided us a 1 month family membership and Amy joined me each morning as she greatly improved her lap swimming, upgrading to a new suit, goggles and cap. The staff was friendly and helpful in local attraction recommendations. Just as we experienced in Maine, people here are so pleasant that it almost seems like a version of the Truman Show movie.  It also helps that life slows down here and people are not in a rush, including us. We are not quick to get out of the pool to run to an office, rather just to return home to plan what hike we would tackle today.

A couple days after our arrival I broke out the mountain bike. Unfortunately, similar to Maine, these bikers up here are no joke. Me with my out-of-shape body and 30lb antiquated bike were no match for the trails of Cady Hill. I mean I did fine, but on some of these uphills I had to get off and push my bike, which is demoralizing. The high-banked S-turn downhills are fun, but I prefer more of a gradual flowing trail throughout. This was my only MTB experience in the area even though they have tons of trails. I am just too timid of a rider I believe, and that is not going to change with my current body…or my future one for that matter.

I got back to the cottage and grabbed Max and Amy and we went for drinks at Stowe Cider. Hard Cider is big around these parts. This brewery has outdoor seating and music a couple nights of the week. 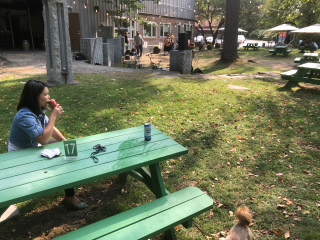 I had replaced some lights in the dirtbike while at Joes and it was having a tough time starting. By the time I got to Stowe it would not start at all and the battery was dead. I  replaced the battery for like the 3rd time in the last year and it still would not start. Eventually I found the fuse was blown. I had a spare and it started right up. I installed the lights backwards and it overheated the circuit. What is comical is that I had done the same thing the year before and pretty much tore the whole bike apart to try and find the issue. Another bonehead move. Oh well, at least it was running again. I just disconnected the rear turn signals I had installed improperly and decided to press my luck, relying on hand signals for people behind me. 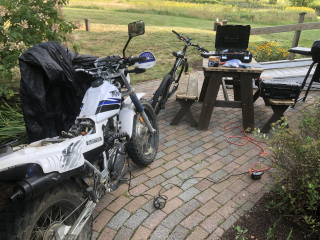 The following day we went into the woods for a nearby hike with Max. All the hikes that don’t go high up into the neighboring mountains (Stowe is in a valley) seem to center on an old Maple Syrup production operation. It feels like the Gold Rush in California around here. People tapping trees left and right, bringing in jugs of maple syrup. Slamming a thimble full of sugar down on a bar in trade for a shot at the local saloon. 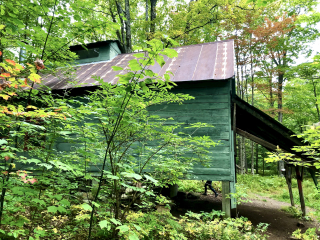 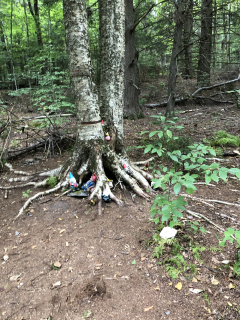 Later that day we walked into Stowe and picked up various local gifts to send back to Joe and Sarah to thank them for the hospitality of our visit earlier in the month. 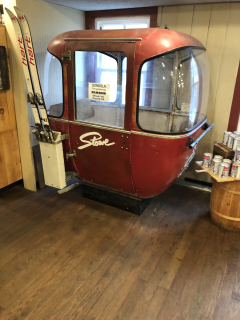 The leaves are changing fast. We have been here only a week and already lots of color change. Because Maple leaves seem to be the most common tree that turns all the way from green to red, this area really gets the full spectrum and in equal proportions.

Here is a view from “Sunset Rock”, just a short half mile hike from town center 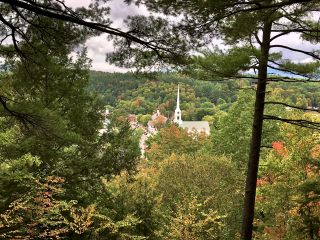 And a closer shot of same church 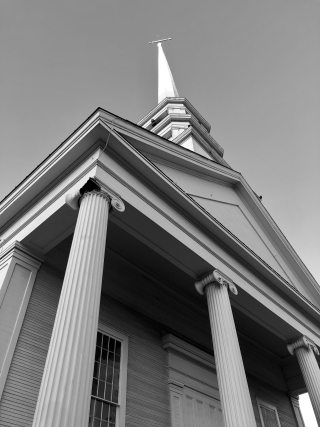 Stowe itself is nice manageable town. We did not go into any restaurants or bars, but you could just imagine in a COVID-Free year how people would spend the day on the slopes and walk into their local watering hole and belly up the bar with their friends and recount the stories of the day. There are plenty of options to eat and drink to keep you busy for a season without getting bored. That being said, I don’t want to be here when the weather turns cold, Fall colors is enough of variation for me.