A Trip into Rural America: North Carolina (Part 1 of 4)

We Left VT, headed towards Forest City NC. Driving down the parkway though CT and into NYC is like the final scene in Star Wars where Luke is flying the X-wing fighter through that tight channel on the Death Star. There is chaos all around and any accident on either side of you will impact you and ruin your day. I feel like the Beverly Hillbillies, with all my belongings strapped to the car. I just need to get through this stretch without myself or anyone in front of me doing anything stupid. Stay on target!  Turn the computer off and just use the force. We pass multiple accidents just after they happen, before the backup has started or police on the scene. Finally, we explode into Manhattan for the 3rd time in the last month. Back onto the New Jersey Turnpike and we are on our way.

It took us 12 hours to get passed DC. I am amazed at how much traffic there is around here for 9pm at night during a pandemic. We settled on a Hyatt in Virginia, smuggling Max the Ewok into the room via the back staircase. Another 8 hours the following day and we were in Forest City NC. It is about an hour west of Charlotte and 1 hour Southeast of Asheville. We dropped our stuff and the dog and headed out for groceries 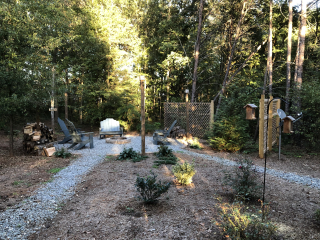 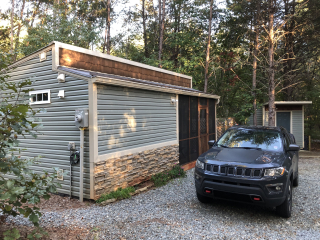 We ended up at the Food Lion, which turned out to be a little too sketchy, even for me. No one had masks on (Employees included) and the place was just dirty. But the prices were cheap! It left us a little uneasy about the next month of our stay here. Later on I would find a nicer grocery store, Ingles, even closer to our place.  We got back, unloaded, and I tested out Door Dash for Japanese food. It went well. I had a bunch of discounts across various platforms I wanted to use (Door Dash, Uber Eats, Grub Hub). 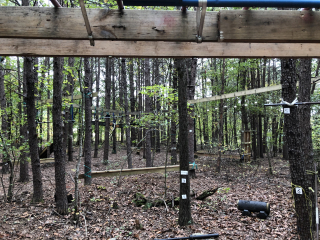 First coming upon it, looked like some pagan ritual site out of Blair Witch Project. I used the area for exercise in the morning, too old to use the actual climbing stuff, but tried a few pull-ups and dips.

After breakfast we drove into town 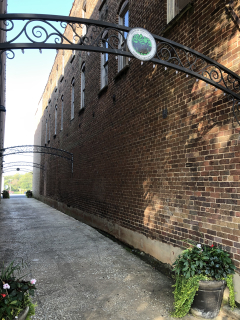 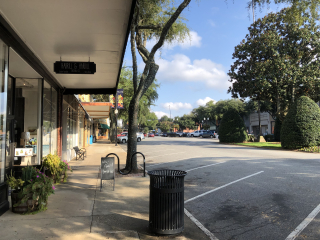 It felt like the town that time forgot. I was Marty McFly in Back to The Future, walking into Hillsdale in the 50s. A quaint place. A lot of closed up shops as they struggle with finding relevance in a changing world. For all the places we have been traveling, this area seems like COVID is not really an issue. If you didn’t have news outlets you would never know there was a pandemic.  They built a nice Rail Trail here and we rode that for about 10 miles total. Headed back and built a fire.

Made a stop at the ABC store. I recalled from last year’s dirtbike trip that a lot of these counties are “dry-ish” or only have these designated ABC state run stores to sell liquor. 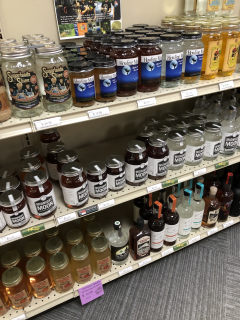 We loved our place. The hosts really spent a lot of effort making it perfect for long-stay guests. Sure, we would like to have been closer to some of the activities in Asheville, Brevard and Hendersonville, but during COVID, this is the best spot for us, and would rather come home to a good setup and drive an extra 20 minutes than be closer with a less than ideal house.

The following day we drove toward Lake Lurie. Stopped to do a hike at Dittmer-Watt Nature Center. 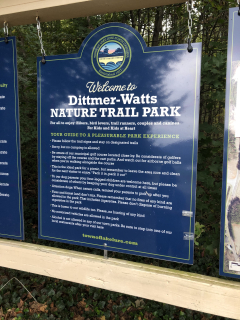 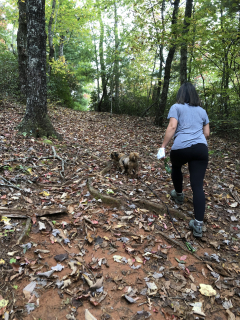 The lake is kind of a mini version of Lakes of the Ozarks. A destination in the summer for people to relax, play golf, and get drunk on the water. 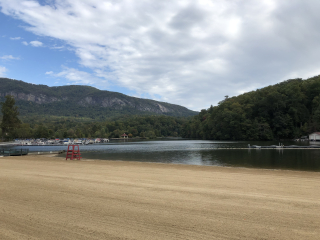 Its claim to fame is Chimney Rock 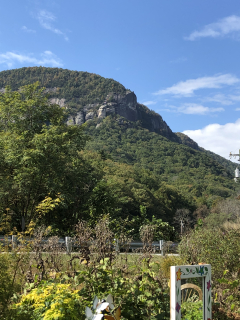 It is a park with a road that winds up this mountain and then you walk out on a rock overlooking the area. We skipped it. At the base up it was a miniature Gatlinburg called Hickory Nut. Complete with wax museums, pony rides, and cotton candy. If you looked close enough you saw the seedier side of it. It was like coming by a carnival the day before or after and seeing the less respectable types milling about. 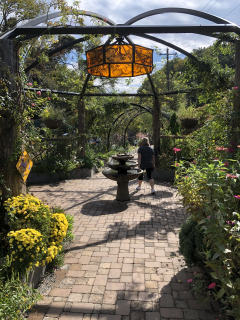 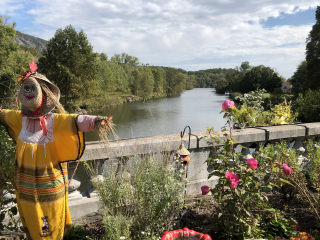 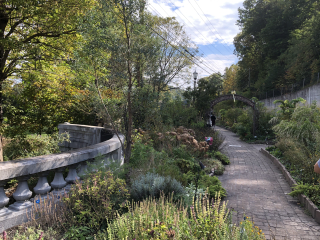 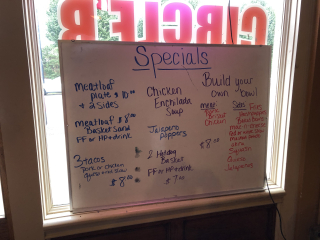 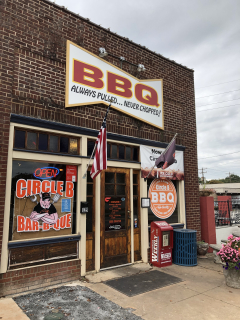 We got takeout and they provided the food in Styrofoam drinking cups. One for the meat, one for coleslaw, one for beans, another for sauce and 2 pounds of deep-fried hush puppies. Then gave us an 8 pack of hamburger buns to put it together.

When I got back I heard that my childhood friend’s father passed away. Caused a great deal of reflection about the innocence of youth and the times we spent playing together. Getting old/sick is rough.

It was time to venture out and do some hiking. We drove to South Mountain State Park to hike the High Shoals Trail. It was a popular spot. Fortunately, we got there early enough. As we were leaving later in the morning, cars were backed up for an hour just waiting for a parking spot. 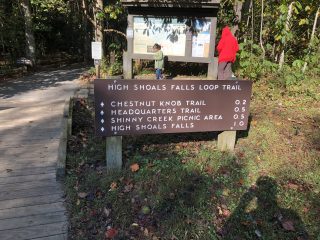 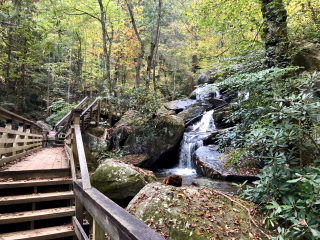 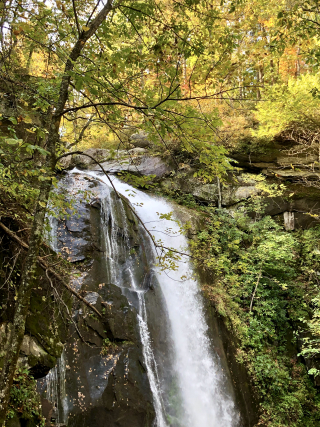 We were hoping to get a double dip on the fall colors as the cold made its way south. We still had a few weeks to go, but regardless, the colors would not be as vibrant mainly due to the lack of maple trees that provide that vibrant red contrast.

The trail was a 5 mile loop that was pretty narrow in the beginning as you worked along the falls, up wooden stairs. With no one wearing masks this was a bit nerve-wrecking. Once we got on the back side, it was an old forest rode and provided less crowds and more room. 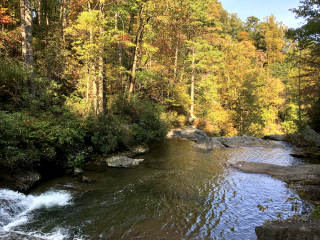 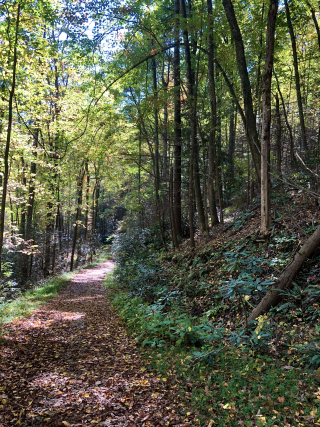 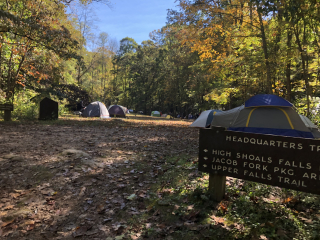 The next day we drove to Pinnacle Peak. This place was closer to Charlotte and was an absolute madhouse. 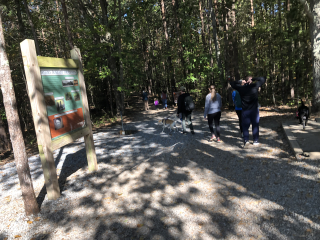 Bad idea for a Sunday hike. Hard to enjoy, but we made it to the top and then retreated back home 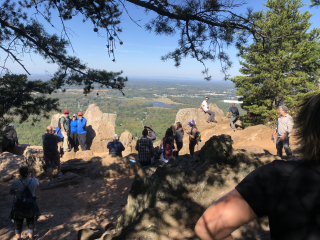 I took the dirtbike out for a spin. Rode it out to Lake Lurie. Really windy roads along the East side of the lake. I mean you couldn’t go more than 5 mph on these hairpin turns. I got up north of the lake and there was a big golf resort. Seems like this is a big retirement area full of golf and huge houses overlooking the water. I had to constantly downshift to make it up this roads that seemed like 45 degree angles. I got into some private roads and unfortunately was not able to loop back to the house because I ran into a gated community. Google maps sometimes comes up short in these areas.  I backtracked and headed home enjoying the crisp Fall weather as I weaved through the towns of Rutherfordton and Spindale. Along with Forest City, they make up the Tri-Cities. Why does it always seem they group cities/counties in 3.

Our next trip is into Asheville for the day