Our first full day in AZ we hung around the house as I was not eager to get back in the car for a while. We sat outside for the sunrise over the 4 Peaks of the Tonto Forest to our East 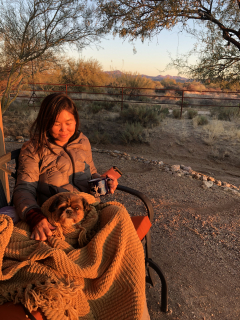 I fixed the fuel leak on the dirt bike. I was testing it out, riding around the dirt hills of the neighborhood and ran into another guy on a dirtbike. I asked him where there was to ride around here and he said he would show me later that afternoon. He even invited me back to his house to check out his setup. 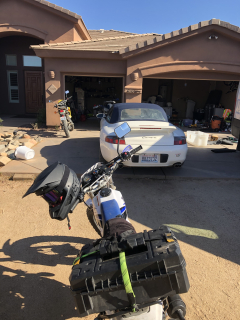 He and his wife lived outside Seattle but came down to their house here to get away from the cold and rain this time of year. We went riding into the Tonto NF and he popped up a hill on his 350. I tried to follow but had an epic crash, falling back down. I was a little embarrassed and confidence shattered. I made it up the second time but my mental state was now fragile 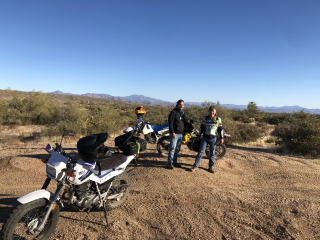 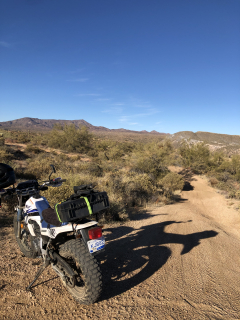 I would come back to this spot the next week to practice on my own until I mastered it. Probably not the best idea to do solo in case of injury or accident but I needed to prove I could do it after reading online how best to approach rocky hill climbs (stay on the throttle with momentum and feather the clutch).

After we got past that hill we got into more and more treacherous territory. We were riding along a rocky spine and the single track was just rocky slot about 2 feet wide. We came to a significant drop off and I was nervous, especially after my recent “yard sale.” John went first and out of view. His buddy followed and dumped slightly. I stopped short and laid the bike over. When we went to continue I picked up my bike and went to switch gears and the clutch felt awfully loose. I looked down and the clutch lever was broken in half. 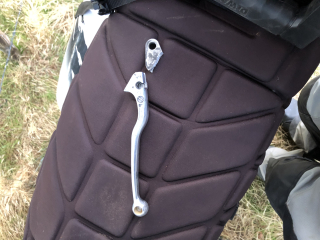 WTF. We were in the middle of no where, Our lead guy was now a dot on the landscape at the bottom of the hill and my bike was not ridable. How were we going to get down (the ridge was too tight that I could not turn around) and how was I going to get bike home. Eventually John hiked back to us and said he had a spare clutch lever. He handed it to me like I was supposed to know what to do with it.   Up to this point I probably pretended I knew bikes somewhat but now I had to show my cards. I had no clue about bikes. Anytime I tried to fix something on a bike I only created 3 more problems. Eventually after fiddling with the side mirror he realized he was gunna have to do it for me. A zip tie from my bag and we were back in business 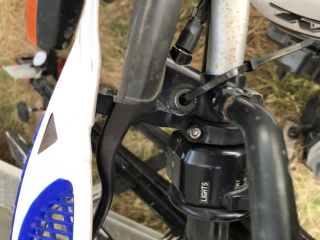 Now that my companions knew I was worthless I wanted to be like yoda, and climb into their backpack for the rest of the ride 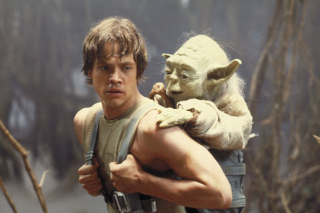 Now that my bike was working I still had to get down this hill. I decided to double down on my worthlessness and ask john to ride my bike down this section cause I knew if I did it I would crash again and they would have to fix it. He agreed and I walked down then remounted when things were safe and flat. We rode around in the deep sand a few more miles and eventually came out on a main road. They peeled off for thier place and I rode for home. 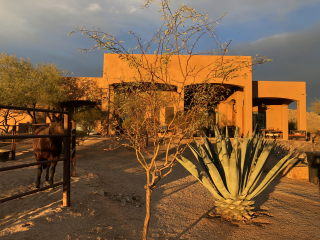 I was not impressed with my behavior. In years past I was the one pushing the envelope with my friends on offroad rides. I also realized that me and my friends were the biggest tools in the shed when it came to what we thought was “challenging” offroad. I also felt my TW200 was just not built for this kind of rising. It did not have enough power to shoot up the hills, the suspension was just too short, and the bike in general was just too small. I always liked it because it kept me off the freeways or from doing any real harm to myself but I need something with a little more teeth, even if it might kill me in the process.

The next morning we drove a mile over the Sonoran Mcdowell Preserve that bordered our neighborhood. He followed the Bootlegger trail around Granite Mtn. The trails here are all well marked and maintained. Not that it is hard to maintain a trail in the desert. 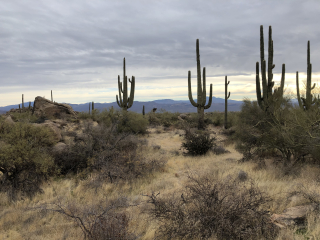 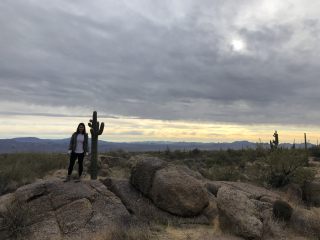 After the hike we drove into Scottsdale and I signed up for lap swimming at the local aquatic center. $3/visit with a heated lane pool sounded pretty good. Even on days that were in the 40s the pool was always warm to the tune of 80 degrees, but getting out was always a challenge.

After the swim we hit trader Joes and then went combing the pawn shops for a new mountain bike. At the 3rd one I found a mtb that was a decent Cosco brand. They wanted $200 for it. The tires were flat and I made it look like it was a piece of junk, doing my best dickering attempt and got it for $100. I am a horrible barterer so I was quite happy with myself. I strapped it to the back and we were off. 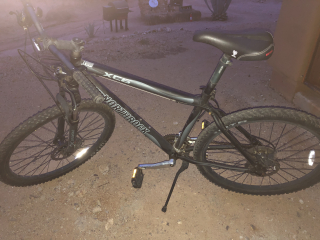 I also picked up new clutch levers. I bought 2 because I was sure if I did not I would break it again and never forgive myself. 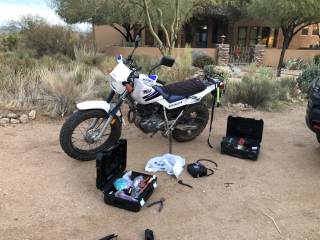 The next morning we went back to the Sonoran Mcdowell Preserve but this time from a different trailhead. A 5 mile loop on the Whiskey-Turpentine Loop. 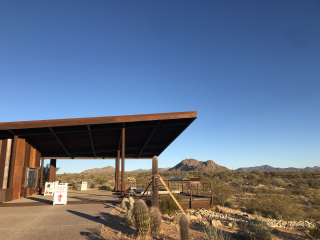 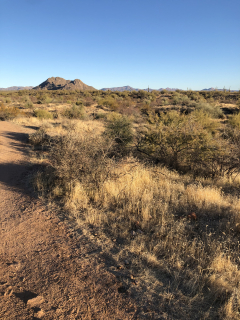 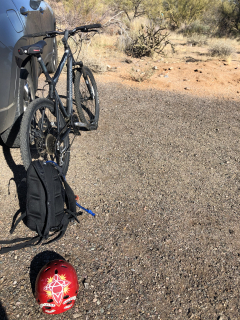 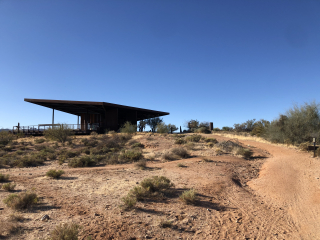 Now this was my kind of riding. Finally some smooth, undulating trails without busting my ass uphill and screaming downhill out of control on the turns.

Later that night we went over to John’s place for dinner outdoors with some of their friends. It was nice to socialize with people. It had been a long time since we shared a meal with others. The heaters did not work and it gets cold in the desert when the sun goes down, so we made an early exit.

One more trip to The Preserve today to knock out the Granite Mtn trail before starting to attack trails a little farther out. We circled the mountain and it looked appealing for scrambling opportunities so after taking Amy home I went back and went off trail to scamper up to the top to sit and enjoy the views 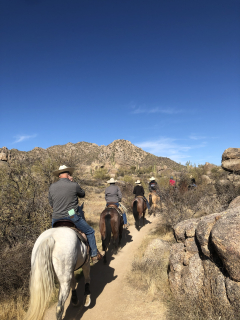 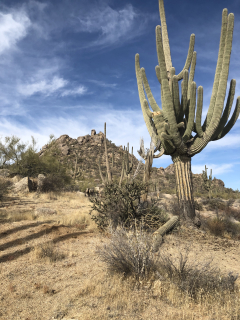 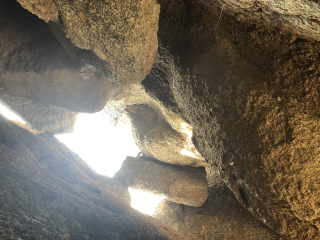 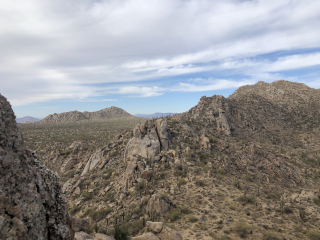 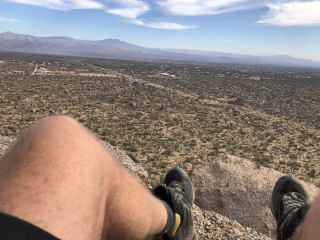 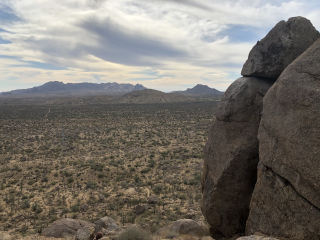 We were in the zone now for hikes. Today we did Brown’s Mountain Trail.  A gradual ascent but the last bit was a little steep for Amys linking and she had to slide down a bit on her butt for the descent. Which is always comical to watch. The top had a post where people nailed their deceased pet’s tags. A nice tribute to former hiking partners 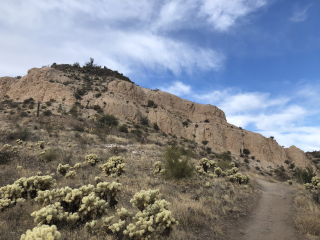 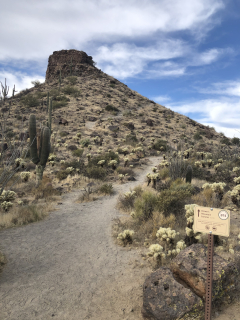 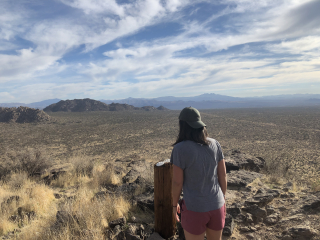 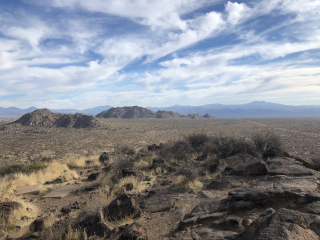 That night I was woken up at 11pm by Amy standing over the bed like an Asian nightmare version of The Grudge. She said we had to go to the emergency room because Max was sick. Unfortunately this was not the first time. I struggled for 15 seconds to grasp where I was and then another 15 to see if there was a way out of getting out of bed. She said he was in pain and after pawing her in the middle of the night, retreated into the back of his cage. I went to check on him, but dared not get too close as he was liable to tear my arm off. I took her word for it and we loaded him in the car and drove to the vet. This happened in VT not too long ago and we spent the night sleeping in the car in the vet parking lot. This time was no different. Eventually they did surgery on his hind leg and found a 1” long cactus thorn buried beneath the skin. He is a curious animal and all these new environments for a former city dog have caused a few hiccups. When he got back in the car he was pumped full of anesthetics. The vet asst handed us a cone to put around his neck. Amy asked if the vet tech could place it, but she declined. She must have been introduced to Max’s alter ego  at some point during the visit. During the ride home, I moved to pet max while in Amy’s lap (a stupid move I regret) and he lashed out and reached for the closest thing, which happened to be Amys hand. He mashed and gnawed on that hand like jaws feasting on Quint

I don’t know why Amy never pulls her hand away but he went at it for like 10 seconds. Her finger was mangled and ended up needing antibiotics and a bandage. Good times.