Off to the UK to hike the Scottish Highlands, or more specifically the West Highland Way

I have always wanted to visit Scotland as it seems to be one of the hip places right now, well, maybe it was about 5 years ago, so hopefully I missed the crowds a bit. In every travel book on Scotland, it eventually mentions this trail. It is about 96 miles from Glasgow to Fort Williams. Foolishly I did very little research on terrain, elevation, or really anything. I just assumed I would do 20 miles a day skipping across flat open fields among the sheep and Scots in kilts, to the sound of bagpipes and clinking whisky glasses (No “e” in whisky when in Scotland). I had watched a couple episodes of the show “Outlander” before leaving to get me ready for the accent. I had also polished off a 1K page book on Scottish History. Not sure I absorbed too much, just endless chapters on Kings and Clans trying to father male sons and fight battles with England for independence.

I would like to start by introducing you to the major players in this story (In order of appearance).

You are all quite familiar with our lead character

"He dresses like a dandy and is a left-hander"

Tam will show up soon enough. He is ex-military K-9 unit

Foxy is Tam’s better half on this trip. And has an unhealthy attachment to him.

Matt is a “Tree Surgeon” and acts as if he did a line of cocaine with each trip to the bathroom based on his extreme sense of enthusiasm on almost any topic.

Elenore was dragged into this by Matt and is slowly realizing this is a living hell. She is also the funniest person of the group, mostly due to her thick Manchester accent and local color.

Alasdair is the glue that holds the group together with his positive attitude and ability to see the best in each of us when we have moments of weakness and want to wrap a hiking pole around another team member.

Stu is the outdoorsman and scholar of the gang. He sleeps on a bed of moss while the rest of us glamp it up in our tents. He has great command on the English language and it’s just fun to listen to him tell stories even it is a description of how he butters his bread in the morning.

John is the true Scotsman of the group. I never know exactly what he is saying but it is a safe bet that it is some sort of bad-mouthing of the crown or some rival Clan. Just imagine Groundskeeper Willie from the Simpsons.

Johannes is from the Netherlands. He has a dry sense of humor that almost matches our narrator. He will try to kill me near the end of this trip.

Dorieke is Johannes’ sister and is the quiet one of the group and whose feminine presence keeps the rest of us from devolving into a drunken mess of dirt covered imbeciles.

Now that we got the formalities covered we can get on with the story. The plan was to fly into Glasgow, Scotland and just start walking north with all my possessions on my back. Every 10 miles should be a small town with a pub. Draw as straight as line as possible between these pubs and I should end up in Fort Williams in 6 days. From there I would find my way to Inverness and fly back to the States.

Thankfully I had an uneventful trip across the pond (besides dropping a plate of food on guy next to me and then have to spend the next 7 hours sitting next to him on plane) and got to hotel around 5pm. I walked to a few classic pubs for a drink before settling in early to start the hike the next morning. 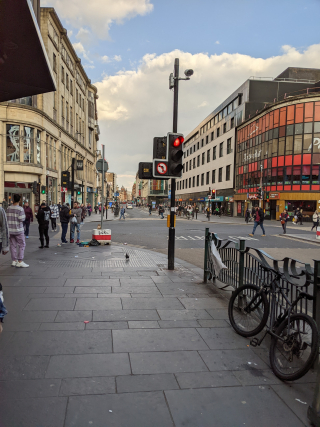 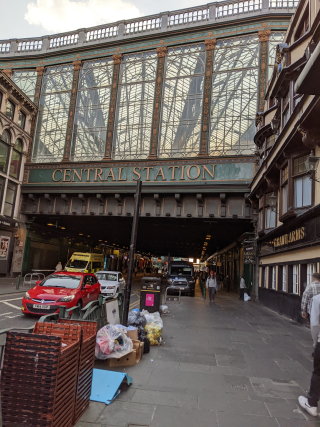 I stopped in the Horseshoe, McSorleys, and Kitty’s. It was early enough at McSorleys that I had time to chat with the bartender. 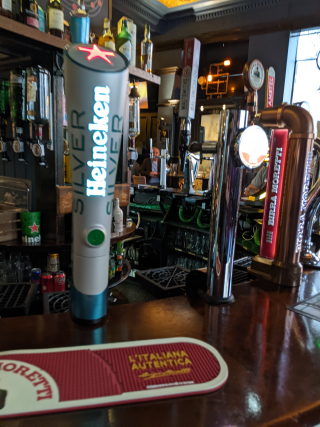 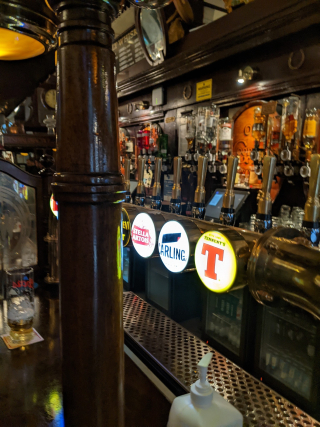 I had done some research on Scotch Whisky before the trip. Single Malt (Barley from one Distillery), Single Blend (multi-grain from one distillery) and Blended Scotch (just dump different grains from everywhere). Contrary to what you may think you can get an excellent Blended Scotch and an equally terrible Single Malt. So it is not that important. Whisky gets its traditional smokey taste from the use of Peat in the process. I try and avoid those. 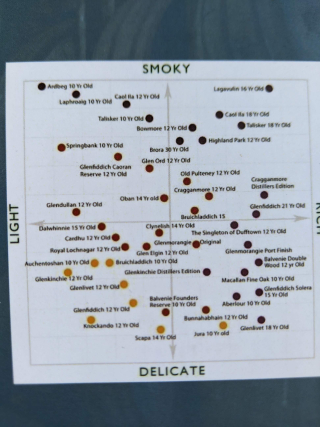 I told him I was in the area for a week and just needed an affordable whiskey that did not taste too smokey (formed with the use of Peat) as my palate was used to the candied flavor of bourbon. He suggested the Highland Park 12. It still was a little peaty, but it became my go to when ordering for the trip. 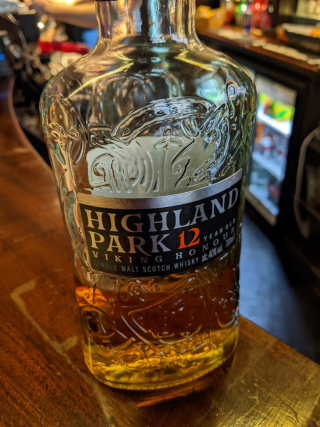 Here were some others he recommended 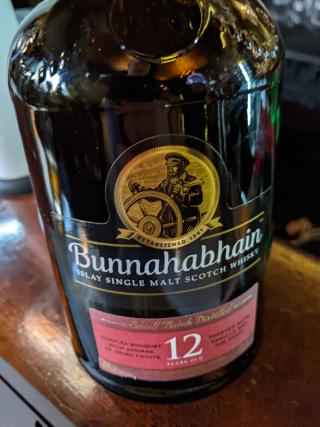 JURA ended up being my favorite, but alas I cannot locate it back home. I also did learn that a lot of these scotch whiskys are actually cheaper in the US because of the high sugar taxation in Scotland. This leads me to my next interaction at the bar. I ran into 2 different locals who bended my ear for 30 minutes, each telling me of their desire to be free of the shackles of the UK; an independent Scotland. I guess this sentiment has ramped up even more since the UK fumbled the Brexit situation. 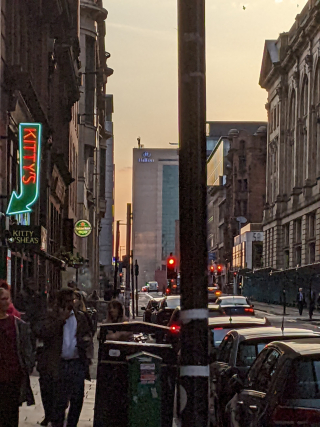 At Kitty’s I caught a band. This was not a group of gentlemen in their 70s playing some weird farming tools to create a traditional Scottish folk song. They were a cover band. They closed the set with a cover of Oasis song Wonderwall. I soon learned that every night concluded with this song in every bar in the UK, along with the Loch Lomond song I mentioned earlier. Similar to how nights in the US would often close with Billy Joel’s Piano Man or Neil Diamond’s Sweet Caroline. I don’t go to the bar anymore so I have no idea what they end with these days. 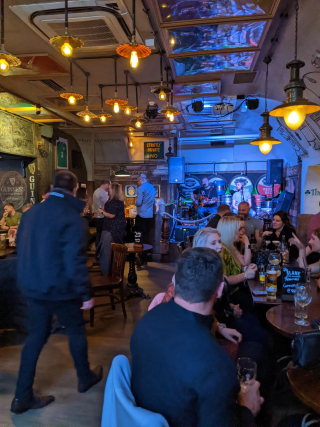 After leaving the pub with a good buzz, I figured the smart move would be to go to bed. I stopped in a Greek take-out place to pick up a Gyro sandwich. The Indian guy started talking, and as with everyone I met tonight, it took me 30 seconds to realize he was actually speaking some form of English. I ignored what he was saying and just said a Gyro sandwich would be fine. He looked at me quizzically. “A Gyro sandwich” I repeated. I even said it in a manner that would cause me to be slapped in Detroit “JYE-ROW”, No luck. He had the large skewer of lamb spinning there. Was it possible that they did not have Gyro sandwiches here in this Greek restaurant? It was the main Hellenic item in the US. So I just resorted to pantomime. I pointed to the lamb, making a cutting motion, and asking it to be inserted in a “Pita”, which I said slowly. Then throw some white sauce on it. The addition of tomatoes and onions was too complicated for this transaction. 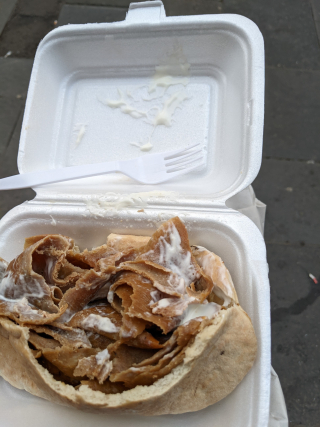 I walked out of there still confused. I felt like I was in a version of “Back to the Future” where right before I climb into the DeLorean, Doc Brown yells at me, “Don’t talk or interact with anyone or you will alter the fabric of history!” I imagined after my interaction at the Greek restaurant I would come back to Glasgow in 1 year and there would be a Gyro Shop on every corner and people would be walking down the street arm in arm with their partners laughing and singing and sharing bites of the amazing sandwich. What had I done! 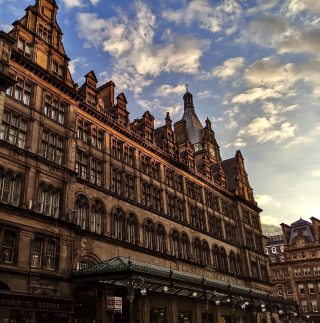 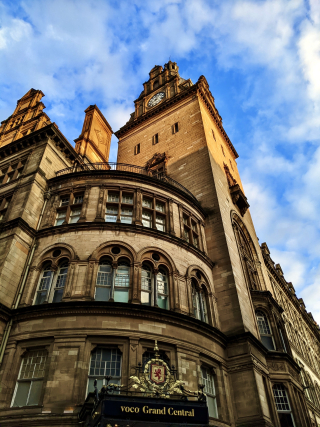