I woke up around 9am and rushed to checkout/walk over to the train station. After learning I was at the wrong station, I took time to pick up a flask of whisky for the trip as well as some gas for my cooking stove (not allowed on flight).

It was a short 30 minutes till I got off the train at Milngavie. Of course it took some time to get on the right train as the town is pronounced MUL-GUY, which makes no practical sense. So, no one knew what I was talking about when I tried to pronounce the town name to find the correct train line. But that is par for the course on language and syntax in Scotland. 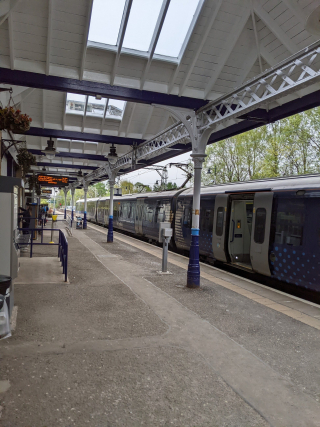 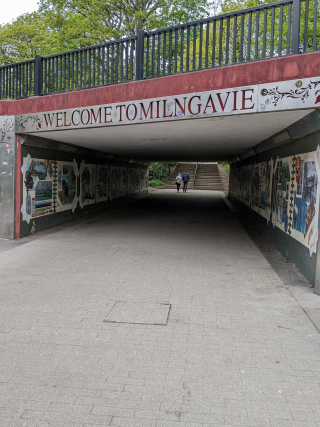 This obelisk is the official start to the trail. Considering it was a Saturday and Monday was a banking holiday in the UK, plenty of people were queued up for it. There I go being British again. I mean "lined up." 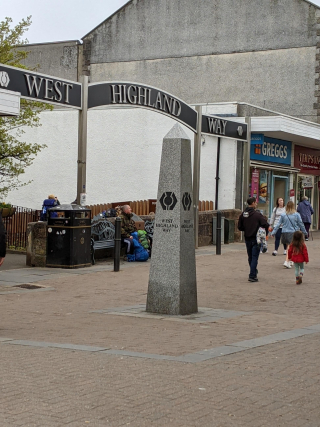 Here is a little description of the trail and distances. When they are listed here on a fancy plaque it really doesn’t seem too bad, much like looking them over on your computer at home. “20 miles a day, that doesn’t sound like too much. I mean I got all day to do it. No problem.” 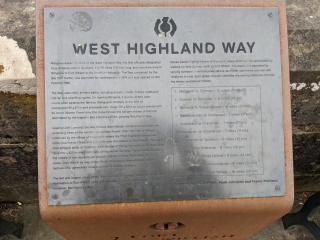 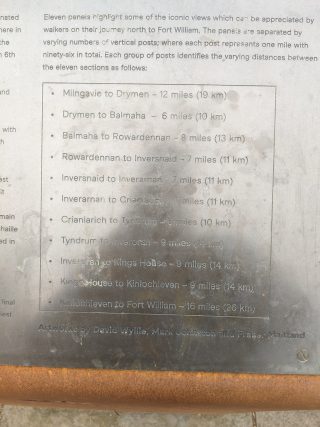 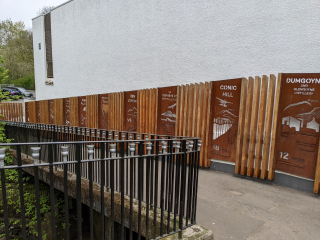 I was off. 10 minutes into my hike it started raining. And I don’t think it stopped again for 6 days!  My pack already feels heavy. My shoulders are aching. It was not till the following day that someone showed me how to tighten my straps to take weight off my shoulders and saved my life, but I died in a thousand other ways along the way as we shall soon learn.

I passed a little B&B 4 miles in. Man you got to be really struggling to stop here the first day. Notice the sign says that there is only 92 miles to go! 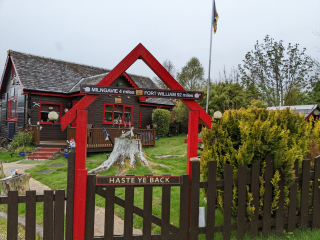 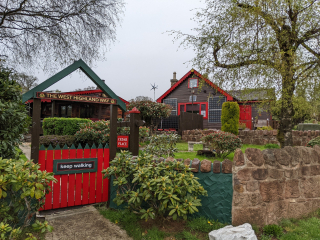 I passed a few people on my way and a few people passed me. Gone are the days when no one came close to passing me. Both good and bad I guess. I started seeing sheep and it was cool since all the newborn lambs were stumbling around and quite interested in the upright animals. Mom was always close by to remind them, “4 legs good, 2 legs bad.” 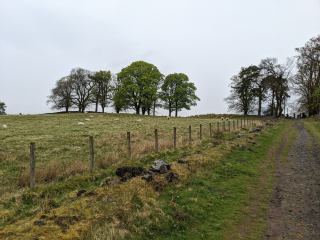 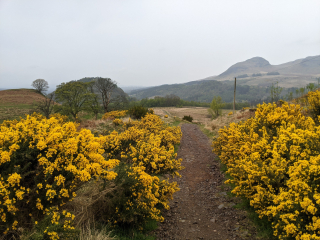 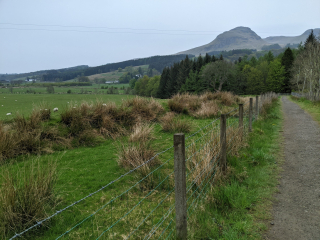 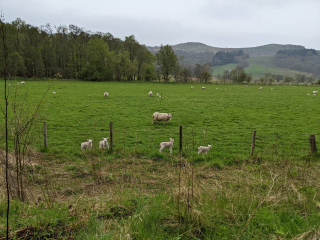 Here is a beautiful pheasant I came across. I know, I am getting desperate for some kind of interesting stimulation at this point 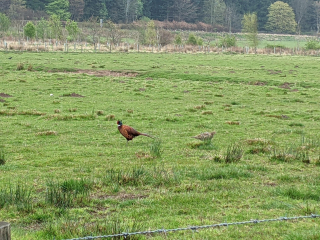 Off in the distance was the Glengoyne Distillery. It sat at the base of Dumgoyne Hill. I saw people climbing up the hill and thought this was some sort of side trip. I was like F*#K That! I was not veering off of the path. 96 miles was enough. Later I realized everyone was just walking over to get some scotch and the people on the hill were on some other death march. I regret passing up a perfectly good distillery during a rain storm, but I vowed to make up for it at the pub in Drymen (my ending spot for the night).

A couple miles down the road I passed the Beech Tree Restaurant. I stopped briefly to see if they had a bar to sit at, and realizing no such block of wood to lean against existed to raise a glass, I pressed on. 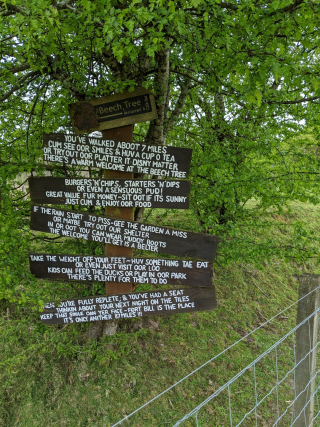 It was 12 miles to Drymen, but since I did not start till 11am, I was still not going to get in that early. It was to be the shortest day of the trip. By the end of the trip if someone told me we had a 12 mile day coming up, I would have drank till 2am and skipped it backwards as it would have sounded like a cakewalk.

Along the trail are a few of these “Honesty Boxes” 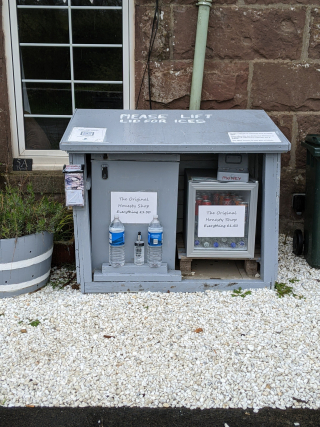 You take food or drink and leave the money. Only among hikers in rural Scotland would that work.

I started getting close. About 2 miles out. 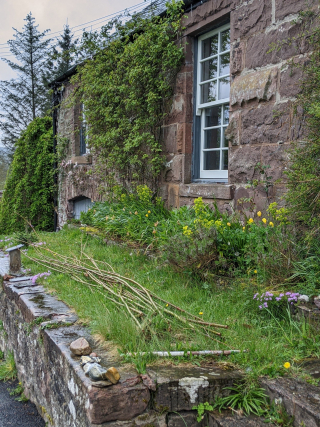 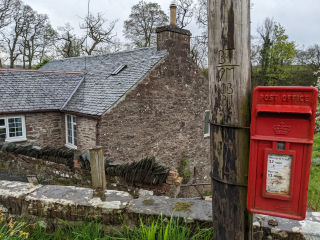 I was hurting when I ran into a couple of women from the Netherlands. Talking for a bit was an excellent distraction from the pain, and I would learn to take advantage of that throughout the trip. It was how a loner like me became the center of a spoke and wheel that joined all of the characters you were introduced to in my previous entry.

As usually happens when I start talking, I lost track of direction and signs, and we actually veered off the short path into Drymen, walking through a field that turned into a bog and soaked my feet. We emerged and saw a sign saying “Drymen” with an arrow pointing left and I still guide us to the right down the trail! I realized it about 5 minutes later. If not we would have been on our way towards Conic Hill and another 8 miles until reaching a town. I think I even commented on the sign saying something like, “Look at that big sign with arrow to Drymen. Here is the trail to the right” I should explain a bit. In most towns along this trail, the path does not lead directly through main street but skirts around town, so you often have to leave the trail to go into town and then come back the next day to continue. This explains some of the confusion, but I was still an idiot.

I checked into the Winnock. I decided that the first night I would stay in lodging as opposed to camp just to slowly ease into it and I am glad I did as it was still raining. 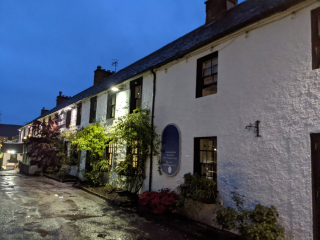 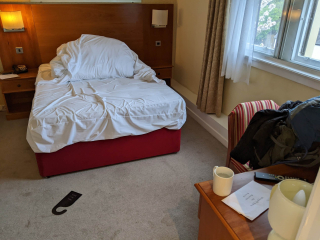 I dropped my gear, had a quick shower and headed over to The Clachan. 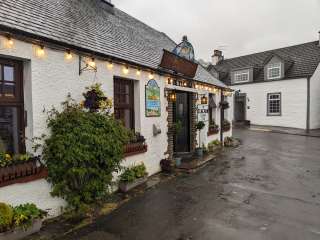 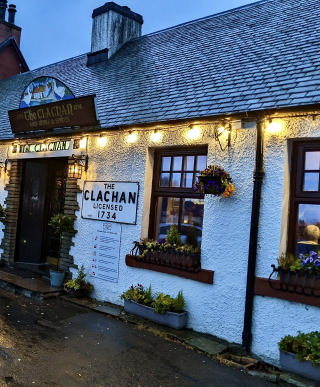 The Clachan claims to be one of the oldest continuous pubs in the Scotland as it was started in 1734. It had a bar section and a restaurant section. The restaurant reservations were booked solid, but you could be served food in the bar, so I found a spot there and settled in for the night.

It was not long before I met Tam and his dog Foxy. Tam was on his 4th time doing the trail and carrying all his gear as well as Foxy’s. I was impressed because he looked none the worse for wear even though he had opted not to use the baggage transfer service, carrying 40+lb pack all with the a positive attitude and an eagerness to meet everyone. Foxy made introductions smooth and before long Tam and I were fast friends. I heard all about his time as a K-9 trainer in the army and all the wonderful people he had met doing this trail in previous years. 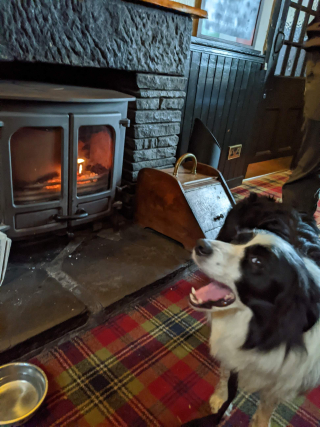 Soon wandered in a group of motorcycle riders. They were hard drinking, fun-loving guys staying at the same B&B as me. They did not understand why anyone would walk 100 miles when you can ride it, and I really had no good response for that one. Next to enter was Matt and Elenore, the youngsters from Manchester. Their accent was hilarious in a whole different way from the Scottish lads I crossed paths with. We shared beers until around 8pm, at which time everyone behaved and headed home to get some sleep before the 15 miles tomorrow. 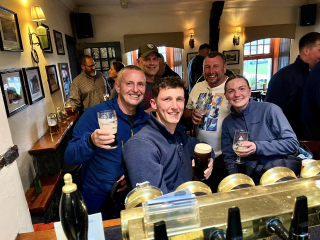 The next morning was kinda funny. I got up early and went down to breakfast and walked into a banquet room with these big round group tables. I saw the biker guys and sat at separate table at first, but then when wait staff started bringing me bread and stuff I did not want to dirty up a table for myself so just moved in with the bikers. The waiter asked me something with a Scottish accent that I could not process, but I remember it being an awkward comment. Something like, “So your group is not coming?” As with most questions directed at me that I don’t follow I simply nodded my head. I ate like a king. They had sausages, ham, bacon, eggs, etc. After saying goodbye to the bikers I looked for someone to pay but everyone was gone. I figured I would pay at checkout or maybe it was included in bill. I went up and packed my gear and walked down the steps. I should say that these B&Bs are all strange. It is like they are 6 separate buildings all connected. I think I had to go through 5 hallways and 6 different types of doors to get to my room. It felt like they built a small lodging and then every year added some oddly shaped addition. Anyway, I got downstairs and there was this huge line of 20 people. I saw the women from yesterday that I walked into town with and said, “What is this all about?” They told me it was the line for breakfast  and they did not open for another 30 minutes. I said that I had eaten an hour ago in the banquet room. To which they said that was for group packages not for regular guests. Huh, I thought. Now it clicked in my brain that the staff thought I was with the biker group of 20+. There was no one at the front desk and just then a biker walked past me and threw his keys on the desk and left on his motorcycle. I just looked around a min then followed suit, throwing my room key on the counter and heading out for day 2 of the adventure with a warm free meal in my belly.