Our first time staying in the same lodging for more than one night. We woke up late and after our breakfast of toast and tomato sauce (I jazzed it up with salmon) we hit the beach before the crowds got massive. 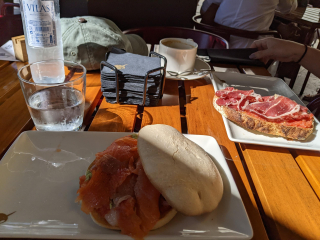 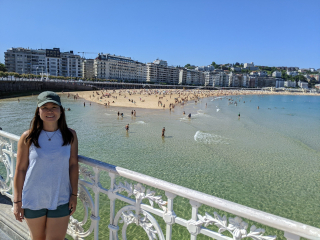 They had a couple floating platforms out in the bay. I swam out to them and looked back at the beach and buildings. A beautiful view to be sure. After laying out for a couple hours the beach was getting nuts. I mean you only had an arm’s length between each group. We decided to walk towards the other beach just to explore a bit. It was a Saturday, so that was one reason for the massive crowds 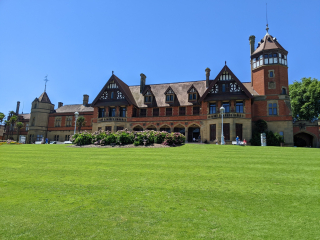 We walked by a few weddings. Done in full Basque traditional flair 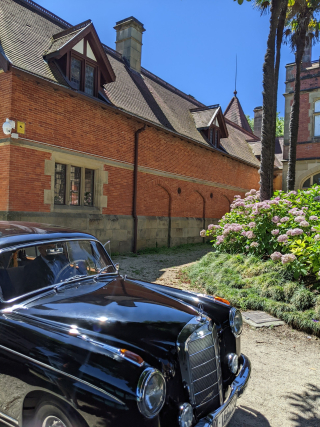 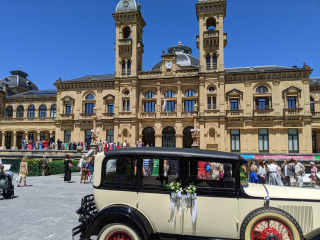 We circled back to the apartment to do some laundry before following in Bourdain’s footsteps in the old quarter to fully immerse in this Pintxos gastro-experience. The first stop was right below our place, Bar Nestor, it was famous for large T-Bone Steaks. We avoided the heart attack and went for some simple tomatoes in olive oil 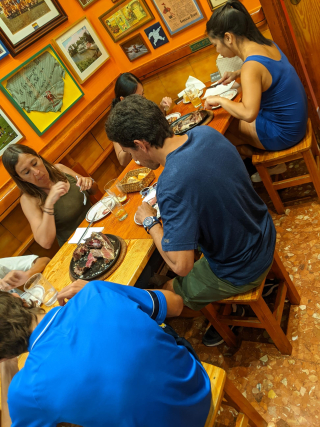 I mean there were 2 tiny Asian women taking down about 4 lbs of meat. In fact it was interesting as the whole bar was full of Asian people, and we had not seen many throughout our trip, even in San Sebastian itself. It felt like they were all turned on by the same blog for Asian travelers or something.

We moved onto the next place to fully immerse ourselves in the Pintxos experience. Basically you walk into a small bar and they have all these finger-foods behind the bar. You get a piece of paper and write down the ones you want and hand to guy at counter. Kinda like ordering sushi. 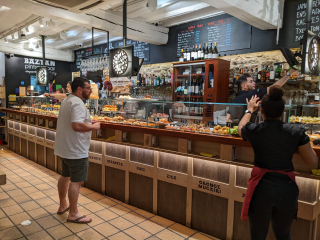 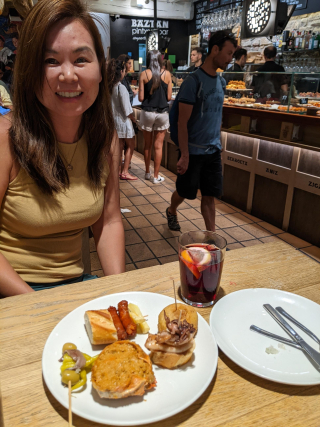 It was good, but after a while I got tired of these and just wanted a full meal.

I figure now is as good a time as ever to bring this up. For some reason people over here are obsessed with jean shorts. 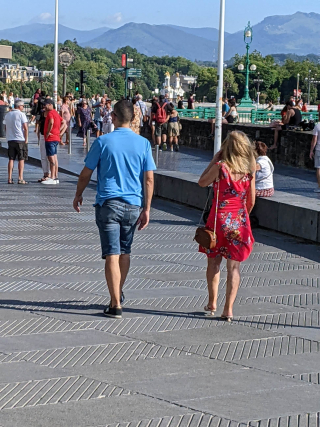 I mean I was too back in the 80s but why is it still going strong in Europe. It cant be more comfortable than other options, not even factoring in the heat in these blazing temperatures. Anyway, just something I was thinking about all trip.

We walked around some more 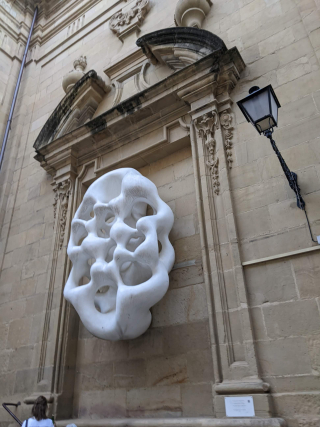 Finishing up the evening with drinks by the water where people dive off a dock. We brought a couple pieces of cheesecake from this popular bakery. I mean they had like 30 cheesecakes on display and would go through all of them in about 2 hours. Much lighter than our American versions It is also the sight of many pictures taken by “influencers” It was quite comical watching these girls get all dressed up and walking out to strike poses. And I am not talking about one or two playful poses but acting like this was a magazine shoot where they go through 15 expressions in 15 seconds. Everything from a sailor salute, a backwards leg kick, kiss to the wind and fake toss of the Easter Sunday bonnet. At one point I saw a boyfriend subjected to taking these photos for his girlfriend. I felt bad for him until we noticed that when she finished it was his turn to pose and remove his coat, toss it over his shoulder, point to the ocean, and generally just act like an ass.

The next morning we checked out and headed towards the city of Bilbao. Our first stop was Gaztelugatxe. There was a trail out into the ocean that looked cool. When we got there they said they had no more reservations for today. Amy, doing a very un-Amy-like thing, downloaded some free tickets for next week and we walked in anyway. We did not even need the barcode as it turns out because when we came back the entry gate the people were on break. We decided not to walk the whole trail as the people on their way back were drowning in sweat. We went to a lookout spot, got our shots and headed into Bilbao 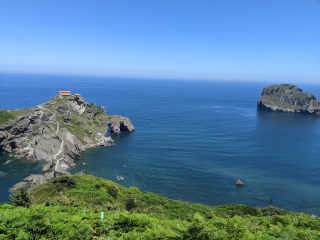 Bilbao is a major city. We had a tiny rental in the heart of the city. After dropping off our junk we found a bar to watch the men’s Wimbledon finals. After that we walked the city, but the heat was unbearable. 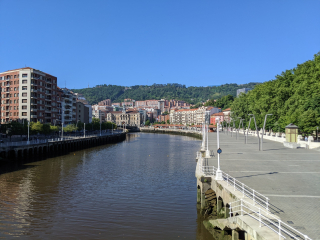 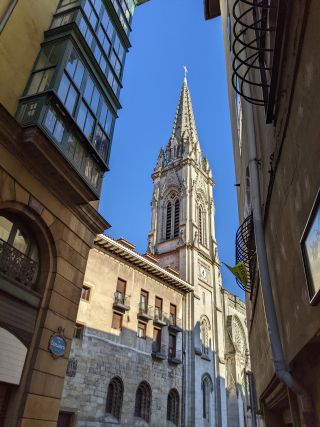 That evening we found a restaurant open on a Sunday that served more than just Pintxos and I was sold. We finally had our Paella, so that box was checked. I found it interesting. All the different ethnic foods have representation in the US. Thai, Chinese, Japanese, Korean, Mexican, etc, but for some reason Spanish does not have much coverage. Yes there are tapas restaurants, but not too many and no real Spanish-only food take-aways. It seems they have Paella and pretty much everything else is borrowed from other cultures. They do have a unique way of preparing food. They only seem to use top shelf ingredients and don’t really add other extra flavor. You wont see hot sauce or even salt and pepper on the tables. It is like, “we know how to cook it better than you, so don’t go adding a bunch of spices to our dishes to screw it up.”

A short sleep. We got up at 4am to drop Amy off at the airport. She flew back to Barcelona and back the US, while I continued West to begin the hiking portion of the trip.