Headed to the land of Lucky Cats, Hello Kitty, and Cat Cafes. The holy trinity of feline adoration. A cheap flight to Japan came across my inbox and we jumped on it. Although Amy had just been there a year ago she had no qualms about a reboot. After last year’s trip to Vietnam I knew that I wanted to make this trip a local as possible. I always try to shy away from tourists, but I was doubling my efforts to experience things as a local. That meant no westernized hotels or restaurants. And even try to get off the path of the main cities.

As usual I started reading books on japan and researching their history prior to touchdown. I picked up The “Chrysanthemum and the Sword.” It was written as guide to Americans working in Japan at the end of the 2nd World War when we basically occupied the country trying to keep it from imploding and setting up a democratic government. I also read “The Roads to Sata: A 2000-Mile Walk Through Japan.” It documents a young man’s journey as he walks from the northern tip of Japan all the way to the south over 4 months.

Here is a brief synopsis of Japan’s history:

Japan's many kingdoms and tribes gradually came to be unified under a centralized government, nominally controlled by the Emperor. This imperial dynasty continues to reign over Japan in the end of first millennium with capital in Kyoto. Japanese religious life from this time and onwards was a mix of native Shinto practices and Buddhism.

Over the following centuries the power of the Emperor and the imperial court gradually declined and passed to the military clans with leaders called Shoguns and their armies of samurai warriors. In the 1300s, regional warlords called daimyos grew in power at the expense of the shōgun. Eventually, Japan descended into a period of civil war. Over the course of the late sixteenth century, Japan was eventually reunified under the leadership of the Tokugawa Ieyasu in early 1600 moving capital to Edo (Tokyo). Around this time some European traders and missionaries came through the country but were eventually killed/expelled and the country was closed off to outsiders and a strict class system was created with samurai at top and labors at the bottom.

The American Perry Expedition in 1853–54 ended Japan's seclusion; this contributed to the fall of the shogunate and the return of power to the Emperor in 1868. The new national leadership transformed the isolated, feudal island country into an empire that closely followed Western models and became a great power.

The military invaded Manchuria in 1931, and from 1937 the conflict escalated into a prolonged war with China. Japan's attack on Pearl Harbor in December 1941 led to war with the United States and its allies. Japan's forces soon became overextended, but the military held out in spite of Allied air attacks that inflicted severe damage on population centers. Emperor Hirohito announced Japan's unconditional surrender on 15 August 1945, following the atomic bombings of Hiroshima and Nagasaki and the Soviet invasion of Manchuria.

The Allies occupied Japan until 1952, during which a new constitution was enacted in 1947 that transformed Japan into a constitutional monarchy. After 1955, Japan enjoyed very high economic growth, and became a world economic powerhouse. Since the 1990s, economic stagnation has been a major issue. An earthquake and tsunami in 2011 caused massive economic dislocations and a serious nuclear power disaster.

Enough on the history lesson. We had a long uneventful flight. I have had increasing back issues and was concerned about this trip but the flight was not too bad and the ability to drape myself over Amy’s seat made it even more tolerable. When we landed outside Tokyo at Narita airport we still had a 60 min train ride into the city to our hotel. A funny thing happened when we got to Tokyo. We stepped off subway train, another American couple got off as well and then the guy realised that he left something on the train and ran back. Well, of course the door closed while he was still in there, and the train took off. And this was not just a, ‘get off at the next stop’ train. It was going back to the airport (60 min). The lady just started laughing as she stood there with all their bags.

When we got to Tokyo station, it was a mess. It is the largest train station, in the largest city in the world. It makes it even harder as there are about 4 transit systems emanating from this hub. Also when you see a map for a train/subway it doesn’t overlay on a city map so it can be hard to figure out where you need to get off. This station was like 6 levels deep and covered a few city blocks. We eventually figured out how to take local transit to near our hotel and walked the 10 minutes.

It was pouring rain and we were exhausted because when we left Michigan it was Wednesday at 7am and now it was 7pm on a Thursday. The hotel staff was very nice and upgraded us to a larger room the size of 2 shoeboxes instead of the normal one shoebox. We passed out and were awake at 3am. Since we couldn’t sleep anymore we caught a train down to the famous Tsukiji fish market. We had to get directions from a bunch of drunk Japanese guys. This was a comical trend. When we left the hotel for breakfast in the big city you would undoubtedly see women hammered stumbling down the street as well as men passed out in business suits down the dark alleys.

When we got to the fish market things were just getting going. 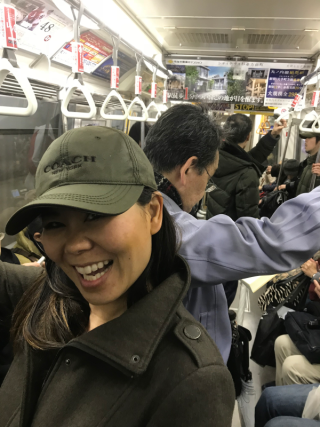 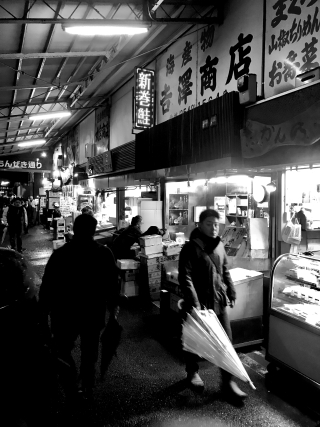 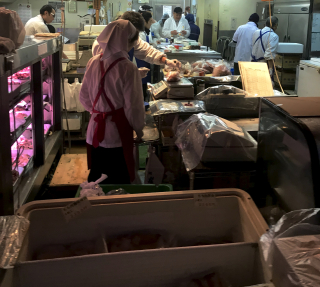 We used the advice of Anthony Bourdain when picking places to eat (avoid places with pictures of food, pick a places that only offers one option, and go where there are no Americans - article). We stopped at Wakabe’s Ramen stand. (Article about future of his foodstall and market area in general). It only had one option, and local workers from fish market were the only ones eating there. It was our favorite dish of the entire trip. So much so that we came back before flying out. 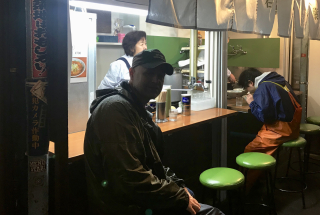 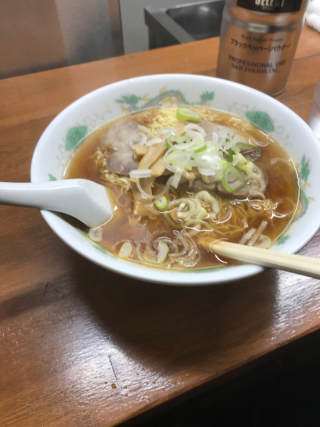 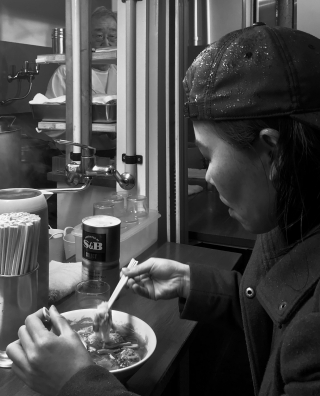 After eating we walked the market and sampled the local exotics from the sea. I think I overdid it with sea urchins and swordfish on a stick, vowing to not have any more food oddities for the rest of the adventure. 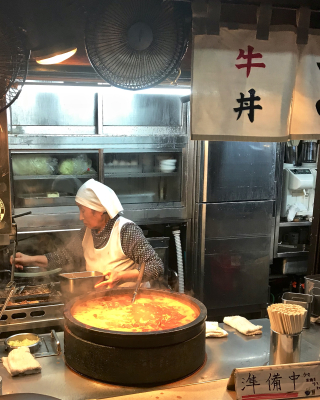 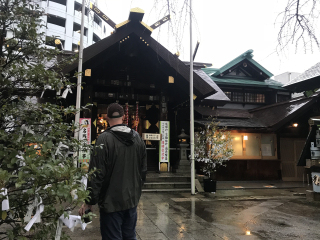 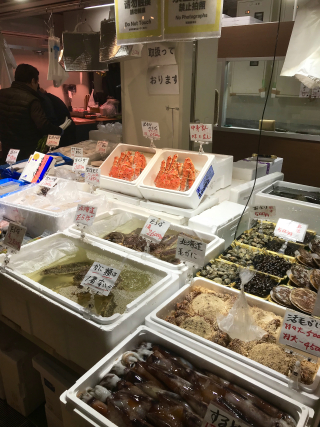 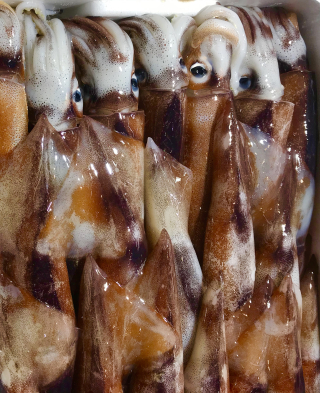 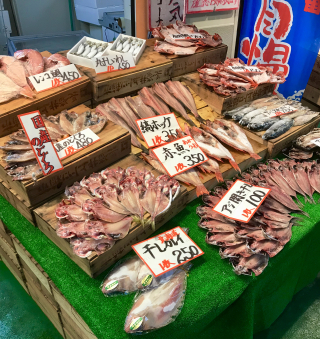 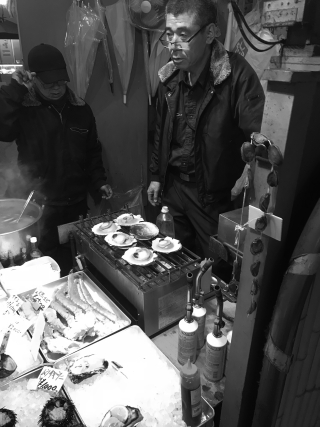 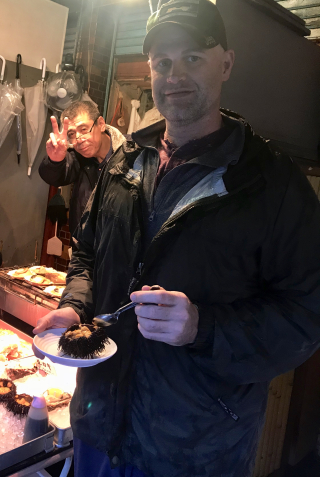 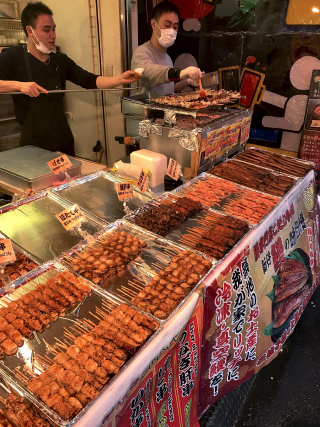 After checking out the market we headed back to hotel and caught a nap before activating our Japanese Rail Pass and boarding a fast train to Kyoto.