Been planning this trip for a while. I read a bunch of travel articles and usually file them away or add them to my list of places to visit and/or adventures to undertake. I read an article about riding motorcycles around Vietnam.  I have always wanted to go there since my younger days of playing army in the woods and researching the American War there. Why not add a bit of danger by throwing in a motorcycle? Most of my trips I travel solo and just bounce from town to town. On this trip I would be going with a college buddy and doing considerably more than just driving from spot to spot. I would be risking life and limb by braving the orchestrated chaos that is the Vietnam highway transportation system. It was a success, both the travelling with a partner and adding an element of adventure. Now I just need to find other interesting endeavors that can live up to this one.

Ok, so we all know about the Vietnam War of our parent’s generation but let’s delve a bit deeper to appreciate what these people have been through.

The area was settled by independent people sometime in BC and around 1 AD came under Chinese rule with various dynasties to follow. Roman merchants visited as early as 200AD followed by the likes of Marco Polo, the Portuguese and missionaries bringing Christianity to the locales (whether they liked it or not). French Missionaries were being persecuted there and sought help from motherland. France invaded under Napoleon III and renamed the area French Indochina (Vietnam, Laos, Cambodia). The people of Vietnam were starting to seek their independence in the 1900s after learning of Marxism from the Russia Revolution but Japan invaded in WW2 and after they were defeated it left an opening for independent control. Ho Chi Minh came to power in the North and as he was working his way south, France attacked again in the first Indochina war in 1950s. France lost, but the south stayed communist-free with help from US backing. Concerned about the progression of Communism the US was involved in 2nd Indochina war (Vietnam War) as the North began attacking the south. US and others were up against the NVA (North Vietnam Army) along with a communist Guerrilla force in the south (Viet Cong). The US lost and all off Vietnam fell under communist control. Vietnam remains communist with close ties to Russia but has recently began allowing more of a capitalistic economy to take root.

Here is the rough details for the trip. Really not that rough as I think I planned for any foreseeable situation

The rough idea is to fly to Saigon (Ho Chi Minh City), chill for a day, and then fly north to Hanoi. Spend night there and then head out on 5 day offroad bike tour of the area between Hanoi and the China border (see maps below). Return to Hanoi for a day, followed by trip back to Saigon for flight back to the States. I flew out on Korean Air by way of Seoul. Here is a shot of the first class seat. That is the closest I ever get to First Class as I was back in steerage with the luggage. 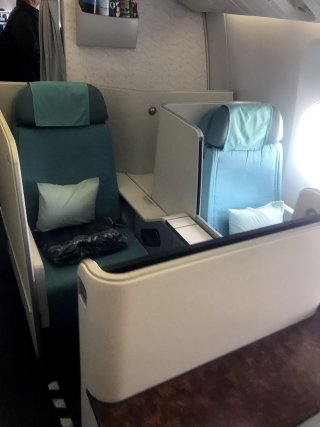 Although I was not in First Class, there was hardly anyone on the flight so I could pop some Ambien, put in my headphones and lay across 3 seats, sleeping the whole way. That is what I should have done, but with the amount of free movies at my disposal, I was glued to the seat back in front of me catching up on 4 months of recent flicks. I arrived in Saigon exhausted, but well-nourished as Korean Airlines takes good care of you 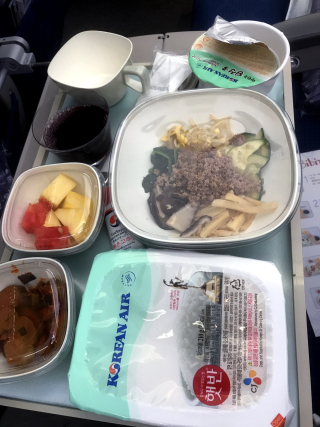 Some guys outside a store in the terminal at Seoul 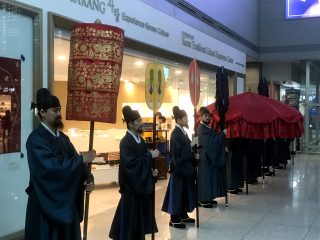 I skipped the Taco Bell in the Seoul terminal, even though they were serving beer, and went for the Pho. It is the native dish of Vietnam. Basically a watery broth with fish sauce, a bunch of vegetables and your choice of meats and noodles. I enjoy it because it is filling, cheap, and low on the caloric intake

I arrived in Vietnam in a daze. The local time was 10pm, but with 20 hours of flying and crossing the International Date line, I had not a clue how which time I had lost or gained. Flying into Vietnam is not like flying into Baltimore. You don’t just hop off the plan, grab your bags and fire up your Uber App. Months in advance I had to get a letter from the government allowing me into the country. It was kind of weird as it not only had my name but 20 other people requesting Visas as well. 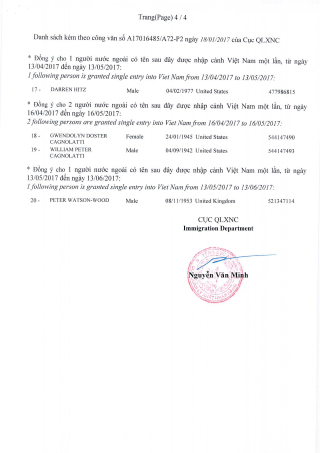 I also had to fill out form with my local itinerary. They are really serious about keeping track of you. Each place we stayed on this trip they took our passports and would not give back until morning. In addition, I had to get 2 more passports photos taken before leaving so they could attach to my file. Entering the baggage area I was greeted with the following line 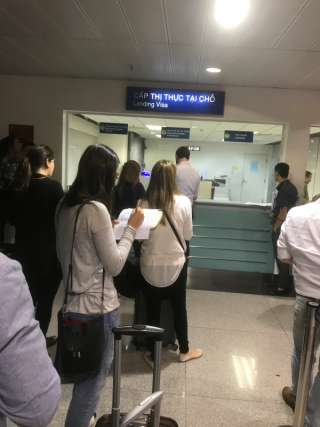 You were to wait in line, hand the documents through the window, sit down and wait to be called up to pay a fee and get a passport sticker like this 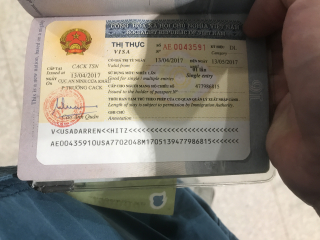 It felt like the episode of Seinfeld with the Soup Nazi.

You are to make no deviations from the prescribed course and take what the people decide to give you and then maybe you will be blessed with entrance into the country. There were all these people in the “holding area” who did not have this all figured out before landing and they were scrambling to get pictures taken and forms filled out. Every once and a while 2 doors would open and some military types would call a name and that person would disappear back behind the doors. I think that is how most episodes of the National Geographic show “Locked Up Abroad” begin. I was finally called to the window to collect my passport and stamp (erroneously went up 2 times before because every name they called sounded the same).

I had carried on my bag so that was not an issue once making it through customs. I read that there were only 2 reputable taxi companies and not to stray or you would get swindled or worse (more on that later). Some guy approached me before I got to taxi stand, which is always a no-no, but in my dazed and confused state I agreed. We got to his car and there was no meter. I asked about the company he worked for and he showed me a business card with one of the 2 decent taxi companies on it. Apparently, a business card is enough for me to hop into a random vehicle in a communist country. I agreed to a price 3x what the guide book said I should pay and we were off. Halfway through the ride he pulled over next to another car and he told me to get in that car and he would take you the rest of the way, or at least that is what he pantomimed. What? Have you ever taken a taxi that shuttles you to another taxi? I agreed because at this point I was just too tired to argue. I made it to my hotel (Liberty Riverside Hotel)

It was near midnight at this point and I just crashed until morning. A long day, but all worked out well and my adventure was about to begin