“Stood alone on a mountain top, Starin' out at the great divide...”(Day 1of 8 CA ROCKIES)

A line borrowed from Detroiter Bob Seger that ran through my head throughout this trip, followed close behind by Carly Rae Jepsen’s song “Call Me Maybe”.

I had not really been planning this trip for very long. More like a quick inspiration and a cheaper option to something International right now. The plan was to fly into Montana (Kalispell), and head north through Glacier National Park, Banff, Lake Louise, and Jasper before circling back in a week’s time for a flight out.

Here is a link to Itinerary as it was projected, it ended up being a few days shorter without cutting out any of the sights due to my whirlwind timeline once I hit the ground.

As usual I worked a hellish schedule in order to get the time off. So by the time the departure day arrived I was ready for a vacation. Unfortunately my trips are not vacations but quests for experiences. 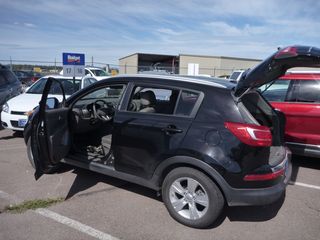 I still had issue with the rental thieves. They had the keys in their hands and first asked if I wanted to upgrade to the crossover, and when I refused she said in the next sentence that they were gunna upgrade me anyway. At least punch some keys first so it doesn’t look as bad. Then, per usual they had to try and guilt you into the insurance and gas package. It was borderline illegal the way she stated, “so I will add the regular insurance package on there for you”, and looks for anything close to a head nod.  I got out with my prepaid package and fired off to Glacier Park

Below is an image of the park. I was coming in from the west Entrance, labeled with a circle (Apgar Visitors Entrance) 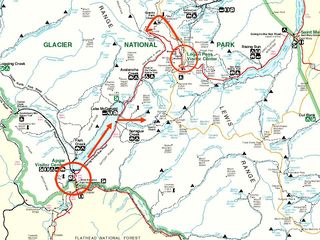 It only took about an hour to get into the park. I stopped at Apgar and bought some firewood and snapped some shots of Lake McDonald. 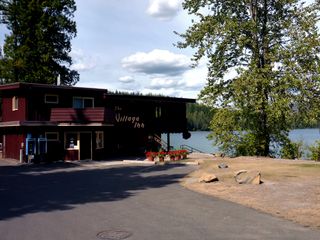 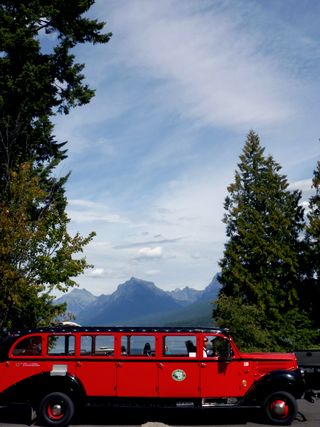 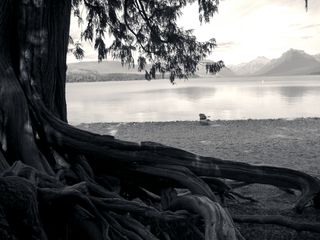 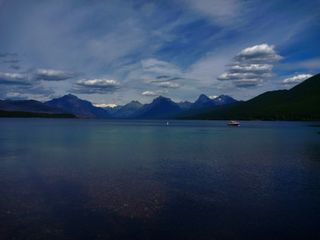 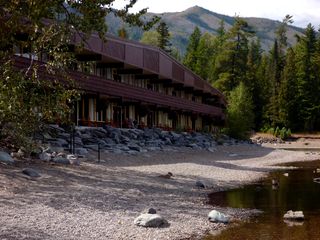 The old school bus shown above and below are called “Red Jammers” here is a link to read about their history and use at the park.

I inquired at the ranger station about day hikes and camping spots along the “Going-to-the-Sun-Rd” that bisects the park and acts as the main thoroughfare. My ideal camping site was closed due to a wildfire, but one was open just passed Mcdonald Lodge a few miles up the road.

When I got to the campsite, I realized it was pretty small (25 sites approx.) and as I drove around I found them all filled. I fat guy in a van yelled to me that they were all filled and that he had gotten the last one. I gave a half-hearted congratulatory salute to him. I could always drive back to Apgar and find a spot in RV city, but thought a better option might be to drop the back seats in the KIA and make the best of it closer to where I was. Before turning in the for the night I wanted to knock out a hike to make my sleep a bit better. I found a day hike to Snyder Lake extending from the Lodge that lasted about 10 miles round trip.

This is indicated on the map of the park above with a small West-East arrow extending from  McDonald Lodge. The lodge was a compound ranging from the main luxury housing to individual basic 1-room cabins. All out of my price range I am sure. 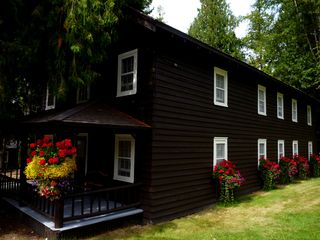 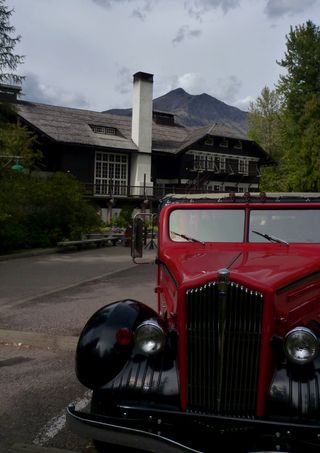 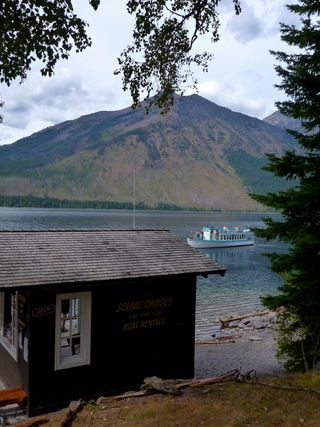 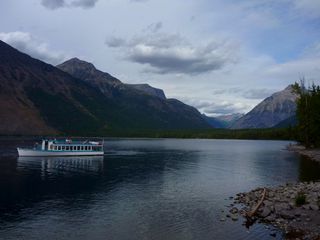 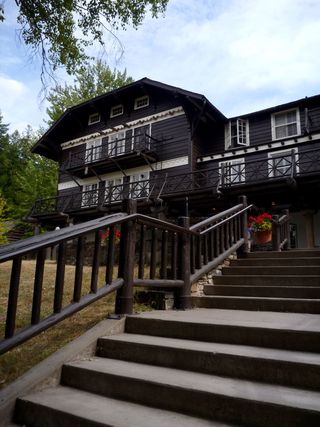 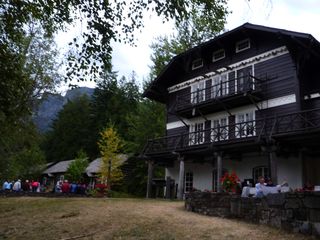 I should mention that I specifically started this trip after Labor Day to avoid all the kids and crowds. It also meant that it would be a little cooler temperatures and many facilities and intra-park transportation would be closed, but when has that been an issue for me?

The last picture above is nothing special, but it was a moment in time I wanted to remember. The leaves were blowing and a chill in the air that had many reaching for wool sweaters. A few couples were sitting on the deck drinking wine and/or reading books. It was the first sign of Fall for me, a favorite brief window before the winter arrives in early November. When Notre Dame still has a chance for a winning season.

I noticed a bar with a few stools and now had motivation to return from the hike in one piece. 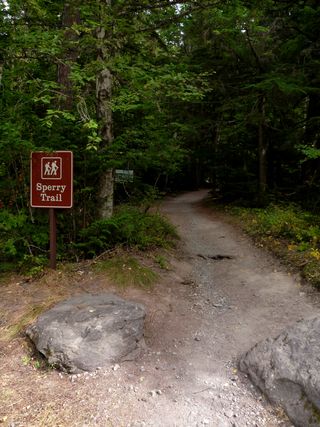 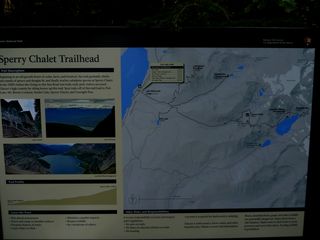 It was a pretty tight trail as I moved through waist-high vegetation at a slight incline after the required switch-back. In Alpine glacier country, every trail starts with an uphill to a ridgeline unless you are looping around a lake or something childish like that. 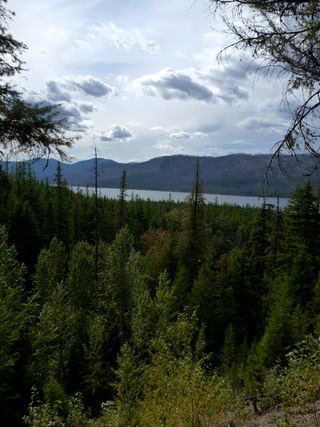 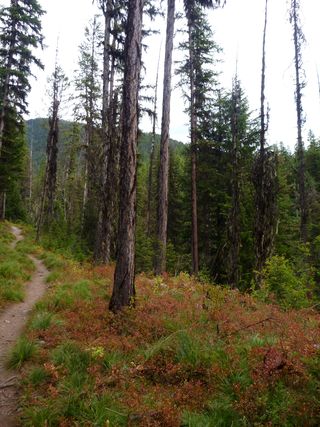 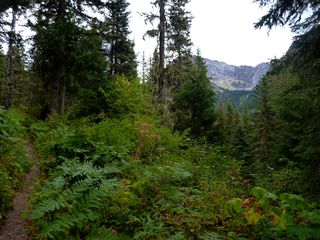 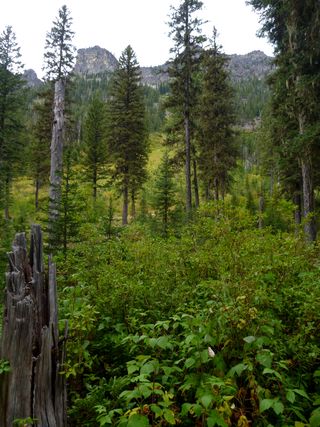 About ¾ through I came across this deer. He was about 100 ft in front of me on the trail. I failed miserably at being quiet, but no issue as he could care less. As I closed in, he simply stepped of the trail, let me pass, and continued behind me 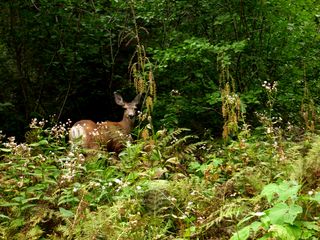 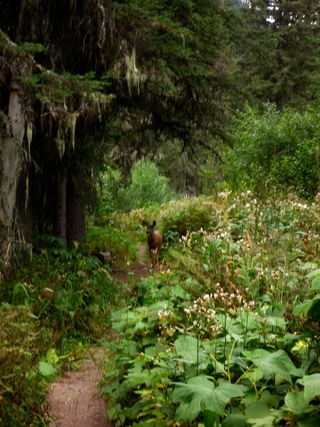 I worked my way into a horseshoe valley, culminating in Snyder Lake 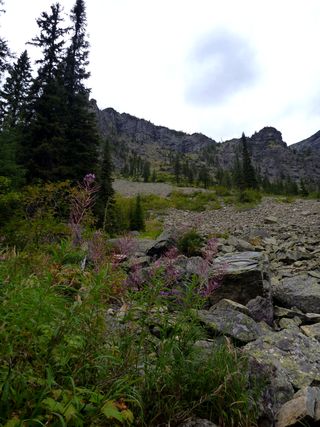 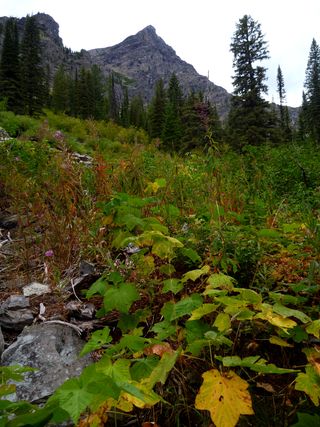 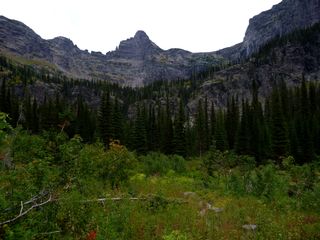 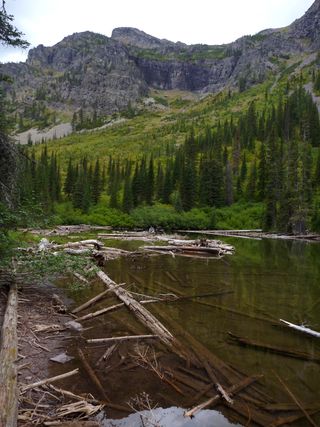 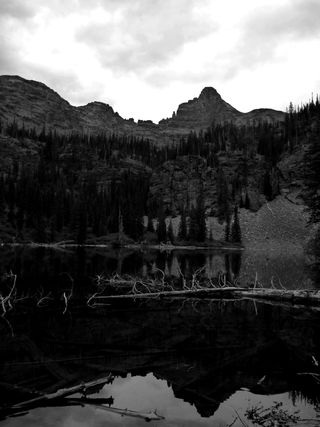 It was a peaceful spot and a good introduction to the majesty I was to see in the coming week. They actually had backcountry camping here. I wish I had known that as it appeared to be a primo spot. If a couple were coming here they could do 1 night at the lodge and then 1 in the backcountry here i suppose. 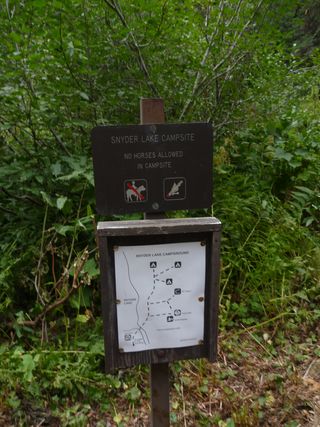 After sitting by the lake for a bit, getting familiar with the blisters that were to plague me throughout the trip, I headed back double-timing it down the hill to by barstool.  I selected a Montana brew and walked down to the lake until nightfall wondering how the trip would unfold. Hopefully some surprises and challenges along the way to test my physical and mental stamina, but not so much as to leave too deep of scars. 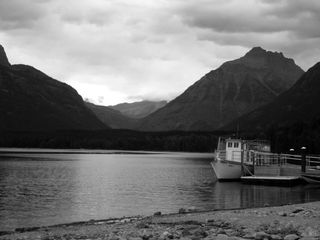 around 11pm I climbed into the back of the car. With the seats down, lying at a diagonal I could just about extend my legs. I was woken up by a tapping on my window at about midnight. It was a park ranger. He wanted to let me know that I had left my head lights on. What kind of jerk tries to be inconspicuous, sleeping in his car in a hotel parking lot and leaves his lights on. I climbed out of my sleeping bag, muttering something like, " oh ya, I was just working on something back here that required me to take of my clothes and wear this bag as a cacoon." He was cool and said as long I had moved on by first light he did not mind me sleeping there.