I was looking for a cheap flight to Latin America. Spirit Airlines has added a number of locations (I have commented on the frustration in my last blog on Spirit, but you get what you pay for and I accept that). I found that they fly to 4 different cities in Colombia for an average roundtrip of $400. I did some quick researching and found that the country is actually one of the safest in SA, although the perception in NA is still that of a drug infested wasteland.

I was all set to go. Here is my initial plan ( Download). A month before I was to depart, Spirit emailed me and said the flight was cancelled and it moved my flight a whole 2 days earlier. Spirit! (shaking fist toward the sky). Actually it worked out fine for me as my schedule was flexible, but I foresee this backfiring on a future trip. I was to spend 10 days in-country. I thought it might be a bit much but I readjusted my plans and loaded it with extra attractions. A rarity for me, my brother was going to accompany me for 5 days.

Here is the basic map, with numbers corresponding to the major cities I will hit in order. 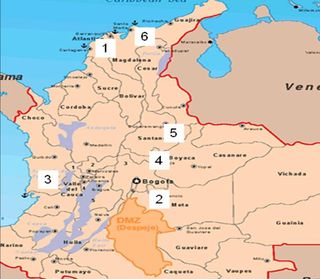 I flew from DTW to FLL (Spirit’s SA hub) and boarded my flight with no events. I sat between 2 Colombians, spread my map across the three seats and began peppering them with questions on the terrain, cities, food and local drinks.  They were, as I would find with all Colombians, extremely friendly and interested in learning what brought me to their country.  My standard answer was price, culture, and adventure.

Landing in Cartagena, I found an airport controlled cab stand and headed out along the coast toward the old city where I would be spending the next few nights awaiting my brother’s arrival. 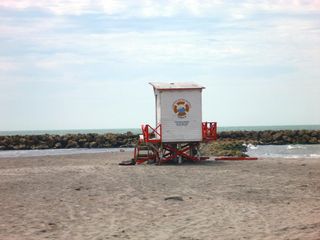 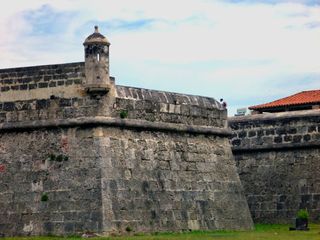 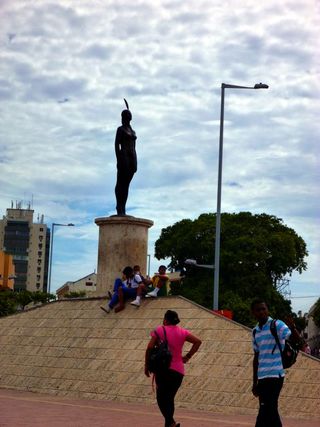 The old city makes up a small portion (2 sq miles) of the city, and I was scheduled to stay in a hostel just on the outside (expensive lodging inside). Inside is a trip back in time to the colonial city, tight streets, vibrant colors, and ornate balconies. I noticed a lot of motorcycles around the city. At first I just thought they were private, but soon realized they were Cartagena’s primary taxi service. I would have a baptism in the near future. 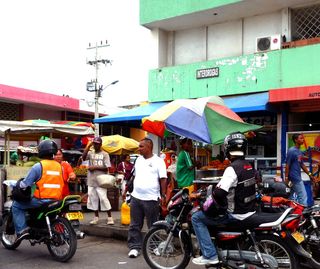 I checked into Media Luna hostel. It is a backpacker’s hostel, which is mainly composed of people from every white-faced country. I dropped my stuff in a dorm, checked out the view from the roof and looked forward to the excitement to come 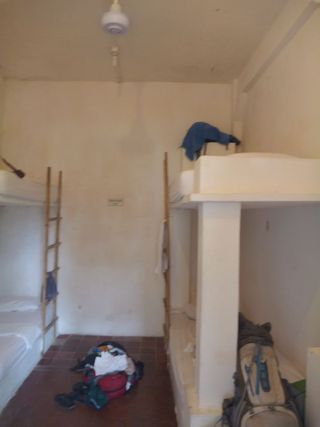 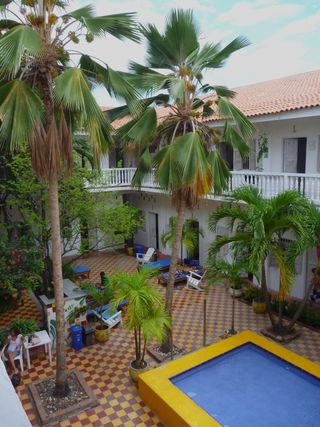 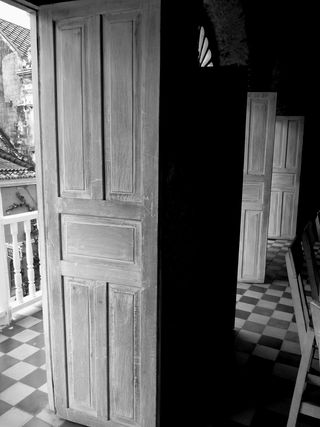 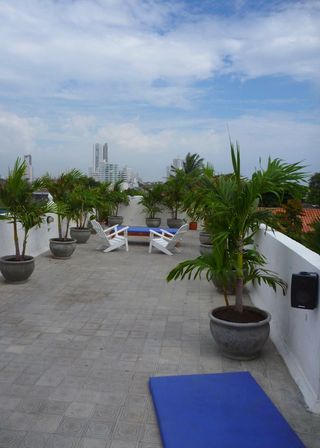 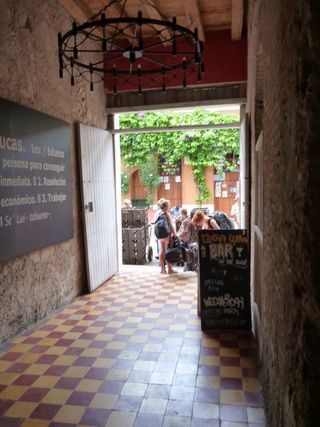 Before I left home, I visited a site called Couch Surfing (Link). It is a kinda facebook where international travelers meet and share lodging in their apartments/homes. A great way for visitors to see the real culture, and for the host to learn about other contries. I had sent a message out on the Cartagena message board that I was coming in and wanted to see if anyone would be interested in meeting for a drink. A girl email me back, who was the Ambassador of the CTG chapter, said she would meet for a drink the night I came in and show me around the old city.

I headed out to explore the city and meet her at a bar called Café del Mar, which sits on top of the wall, facing the ocean, a prime spot for sunset. 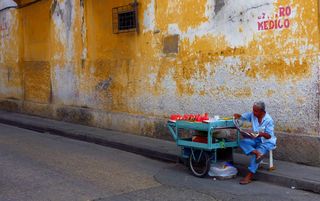 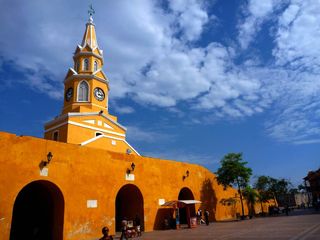 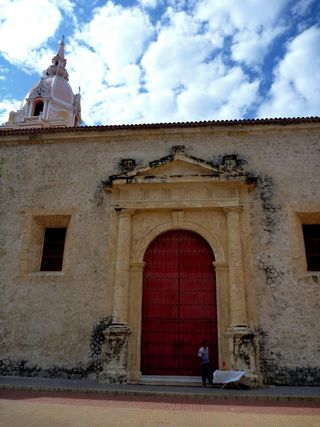 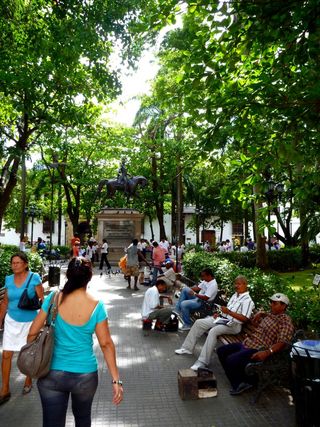 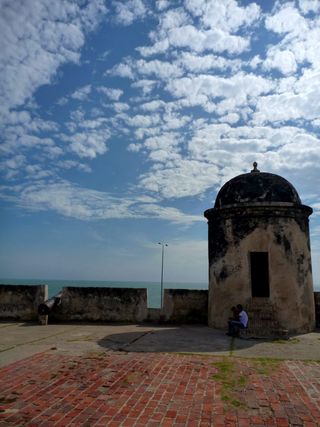 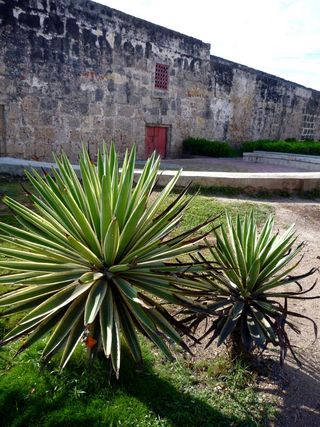 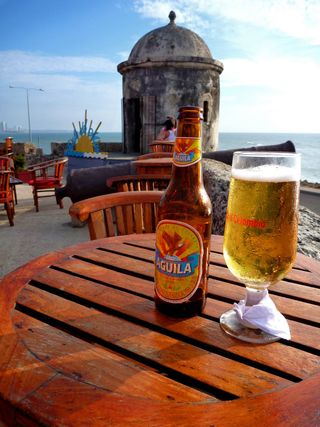 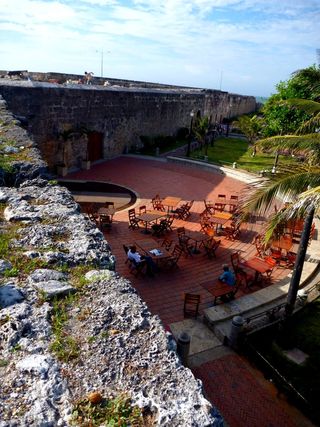 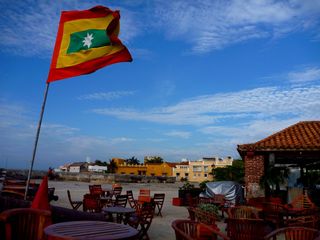 My friend showed up, we talked in broken English since my Spanish was much worse than broken. We talked about travel, school, and future life plans. She was a proud Colombian, passionate about her country. She was half Colombian and half Africa. Similar to North America. Europeans brought Africans over as slaves and they eventually integrated with the local population. Like the USA, Colombia still possesses racism, but it seems more obvious here as my friend and I were refused entry into certain locations because of her skin color. I am sure we made an interesting pair as we strolled the town.

Eventually a couple other friends showed up and they attempted to speak English to keep me involved in the conversation. Per usual I felt like an ass and vowed to learn Spanish when I returned home. 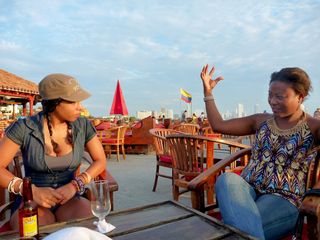 After a few drinks we moved to another bar in the old city, Donde Fidel, where prices were cheaper and street acts dominated the landscape. 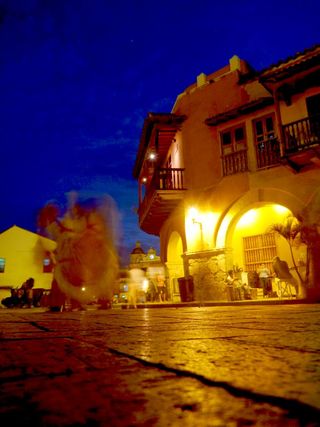 Finally, we went up to the roof of a local club and took in the view of the rest of Cartagena, which included the Castillo de San Felipe and Convento de la Popa in the background of this shot 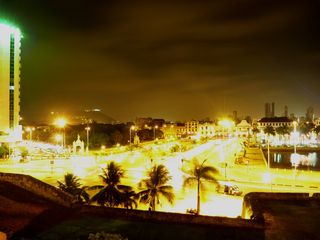 We closed the night at an all night pizza place (Colombians seem to enjoy pizza, and was happy to see these restaurants rather than the golden arches littering the landscape). I struggled to find a cool present to bring to my tour guide. In the end I settled on a print of a retro poster, similar to one seen below (could not find the actual one) 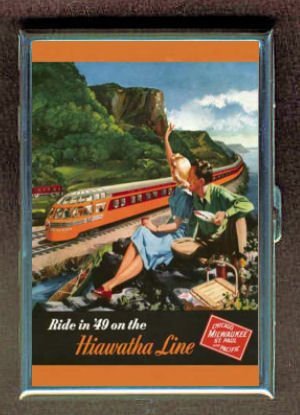 I should also mention that I had talked to her a couple times before I left on Skype. This was an education. Although I used to work in the tech industry, I have kept it at arms-length for the last few years. Eventually I figured out how to use the camera and microphone on my computer and found the program pretty solid.

After a night with locals, and returning to the American hostel, I was ready to switch my lodging to something more private and intimate with the culture. I had not had this complaint on recent trips as the American/European hostels always gave me an opportunity to meet English-speaking tourists who were willing to share travel expenses and join in on an expedition, but that seems to have changed.

I recently read a book, Honeymoon with my Brother. The work of Nonfiction begins with a fiancée dumping our author and he in turn dumping his life to travel the world. He stayed in some pretty swanky accommodations, so I was not a big fan of what he termed, “roughin’ it” but I guess I began to agree with him that ditching the Lonely Planet book and avoiding the backpackers was the best way to get to know a country. There was no way I was ditching my Lonely Planet book, as I had a short time frame and a lot to see, but I tried to find a middle ground.