John Denver. He brought us such classics as "Rocky Mountain High" and "Thank God I'm a Country Boy." Pure genius. I was off to Denver and eventually Ft. Collins CO to pay homage to the legend and get some rafting in. I came in a day early and took in a Rockies baseball game and spent the evening stumbling around the LoDo area of Denver. Plenty of new rooftop beer providers for me to sample. I shook off the cobwebs the next morning and awoke to an amazing site; 50+ hot air balloons scattered across the sky, with the Rockies as a perfect backdrop. I got some great shots (email me for them). 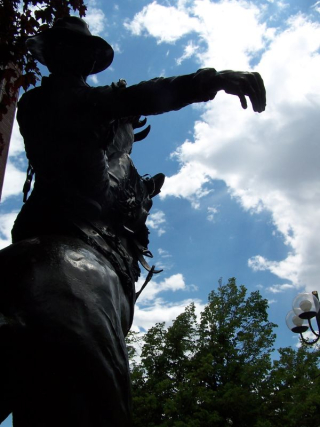 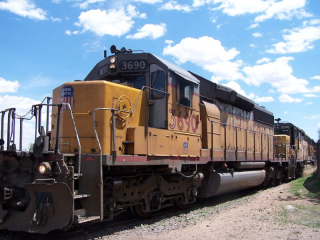 I headed out into the middle of nowhere (AKA the Denver Airport) to pick up the guys from Houston for the Bachelor Party. They all arrived at about the same time and after pouring a few in the terminal we took the shuttle out to Ft. Collins. The ride was a bit longer than anticipated but the view was a decent distraction.

Everyone checked into the rooms and met downstairs for some Tequila Happy Hour. We took the shuttle into town and hit the Rio Grande, famous for mind-altering margaritas (3 drink limit) before going to dinner at a high-class Bistro.

Following dinner we sampled most of the bars, everything from Martini Joints to Zydeco Dance Halls. We all made it back alive and were a little pissed that we missed Girls Gone Wild the night before, but hey, that was not why we were there...right? 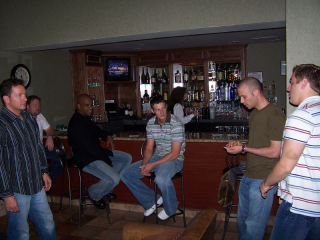 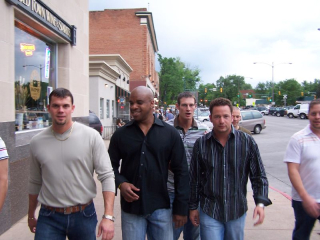 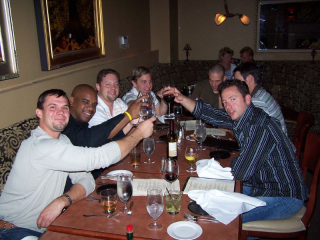 Everyone rallied the next morning to make it in time for breakfast at Vern's and then it was off to the hills. We all put on wet suits for this one as water coming right off the mountain tends to be a little cold.

It was a beautiful ride up the mountain and we were fortunate to have high water, allowing us to run the whole 17 mile stretch. We rumbled through rapids like Pinball and Rollercoaster before breaking for lunch. After lunch the waves got bigger as we hit the class IV rapids. It was hard to believe that no one got tossed, but everyone made it home alive. 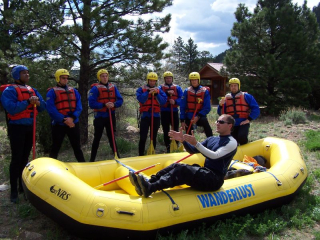 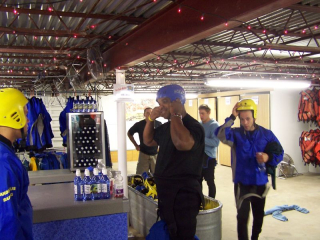 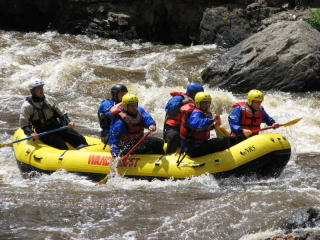 Once we got back to base, I broke out the paddle and T-shirts for the guys. We posed for some pictures and changed into our polyester leisure suits for the final night in town.

We headed over to "Coopers" and were able to watch the video of the trip on the big screen. A bachelorette party crossed our paths, and we forced both the bride and groom-to-be to do some shots. Another night on the town, before crashing...I should say I crashed, and when I got up to catch my flight home they were still going. 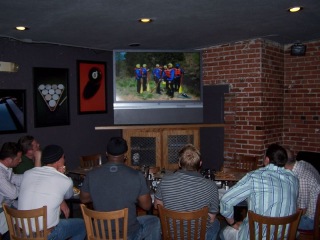 I did not think I would like Colorado(I am a a lifelong Redwings fan and that automatically makes me an Avalanche-hater), but I was wrong. Little known fact, Colorado gets more sunshine than any other state in the union (48 - We don't count those other 2 territories). All the people out there are fit and a bike rack is attached to the top of every car. I have never seen so many Jeeps in my life. And I am not talking about Cherokees, Libertys, or even Wagoneers because those are not Jeeps.