Believe it or not I had yet to go to Europe. I guess technically Istanbul is in Europe, but I don’t consider that to be so. I selected Portugal for my 3 week trip because it did not seem as touristy as France, Italy, Spain, etc. and a lot of the travel pictures I see on the Internet often feature the varied landscape of Portugal. It did not hurt that the Euro was not strong here so I could make my dollar go a bit further and I was amazed at how cheap it actually was.

Let’s begin as we always do with a history lesson. I will keep this short and leave out most dates so that it is easily digestible, but I find it important to know the history of a place before going because, unlike in USA, it is so engrained in the architecture and customs.

Around the year of our lord the area was controlled by the Romans. They brought advancement to the area in the way of aqueducts, roads and vineyards. Roman Empire eventually falls and Germanic tribes sweep in the area. Eventually the Moors of Africa defeat them and take over and bring crops, irrigation and schools. After the Moors, the Christians come in and take control. The Christians become a little too warlike with the Knights Templar controlling the action and a more conservative Christian group wrestles control. Portugal is now seen as an independent nation and has many skirmishes with Spain to the East. Through marriage, Spain claims control over Portugal, but the English come in and save Portugal creating a long-term bond. In the 14 and 1500s Portugal is focusing on exploration with the likes of Prince Henry the Navigator, Diaz, Da Gama and Magellan. A constant fight with Spain over ownership of new lands. The Spanish inquisition spills over into Portugal and they begin killing lots of non-Christians. Spain once again invades and takes over Portugal and once again Portugal eventually becomes independent. England and France go to war in 1700s, Napoleon invades and occupies Portugal as they sided with England. Many leaders of Portugal take off for Brazil and claim it to be the new center of Portugal. England bails out Portugal again by defeating French and everyone moves back to Lisbon. Portugal sides with allies in WWI and neutral in WW2. They began to lose control of all their colonies in India and Africa. They go through military dictatorships, Socialism and are now a struggling democracy.

Now that we got that out of the way, we can focus on the trip. I start by flying into the Azores. They are a group of Islands about 1K miles west on mainland Portugal. They are considered an Autonomous Region of Portugal. According to the Constitution of Portugal and other laws, an Autonomous region possesses its own Political and Administrative Statute and has its own Government. So, I guess something like Puerto Rico and the US.

Leading up to the trip I had Strep Throat pretty bad and was only better for about 5 days before departing. Then, the day I left I came down with either lingering Strep Throat or a new respiratory illness. It kept me in a crappy state for 10 days and made travel a little less than thrilling. Most of my time in the beginning was just focused on getting to my lodging and passing out.

I got a ride to Windsor ON and took a train to Toronto where I caught an overnight flight to Sao Miguel, the largest island in the Azores. I had a couple days here before continuing on to Lisbon, where I would rent a car and circle the country.

Here is my itinerary

Here is a map of Itinerary once I hit Portugal 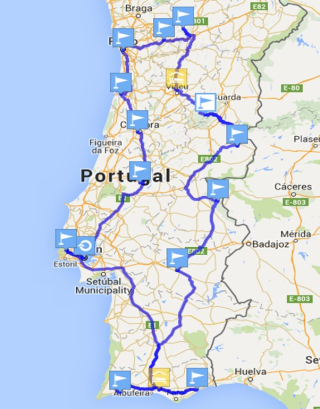 Besides being sick, the travel to Sao Miguel was uneventful. Getting on the flight, a guy was sitting in my seat by the window and when I told him it was my seat, he said, “Do you mind if I just sit here?” I said yes I did mind and he just rolled his eyes and said something about me being a jerk. The nerve of me wanting to sit in the seat I selected. It was a long 5-hour flight as we were packed into this SATA Airline plane. I was to learn later that SATA corners the market on Azores travel so they really have no incentive to produce a good product or adequate customer service.

I landed at 9am, waited in airport for a couple hours as I had to pick up a mobile Wi-Fi hotspot device I rented, from the post office. It turned out to be a pretty solid investment. It allowed 4G connection throughout the trip so I could use my iPhone as a navigation device. I still did not use phone for much else as I did not want to incur random charges even though cellular data was turned off.

It was pouring rain when I stepped out of the airport, but that turned out to be the only day in the entire trip where I experienced rain, or clouds for that matter. I got in a cab and asked him to take me to bus station where I could travel 2 hours out to town of Furnas for the night before returning back to airport the following day. He said for 30 Euro he would take me to Furnas in 30 minutes. In my sickened state that was all I needed to hear. I arrived in small village of Furnas and checked into my Airbnb lodging. I was using this almost exclusively on this trip. It turned out to be a cheap option (usually around $50/night) and had the ability to stay in someone’s home to find out details about the town. Most of the time the second part of this was rarely true as often they were homes with 4 bedrooms that were rented out, but the owner lived at another location making conversation difficult.

I crashed for 4 hours and then got up and starting exploring the town. 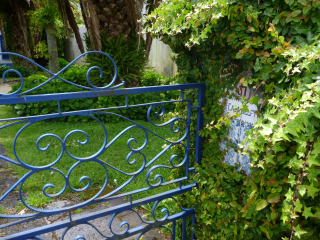 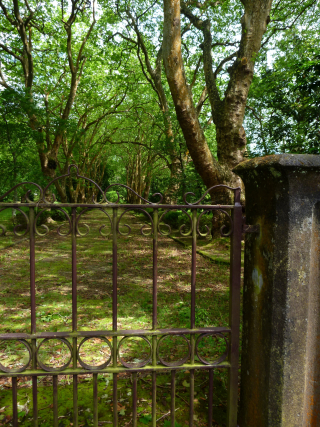 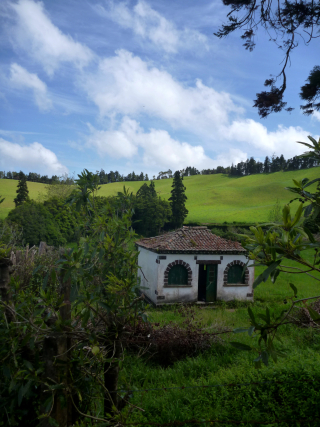 I hiked about 5 miles outside of town to these thermal springs. 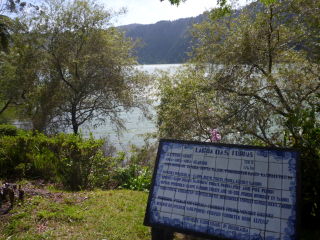 They are too hot to swim in but local restaurants use them to cook their food. 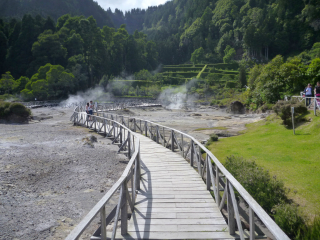 You will see pots lowered into the ground with names of restaurants placed next to hole. They are retrieved during the day and served to customers later that evening 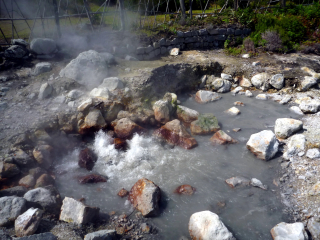 I continued around the lake and then back into town 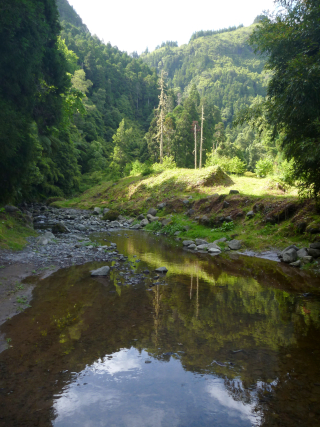 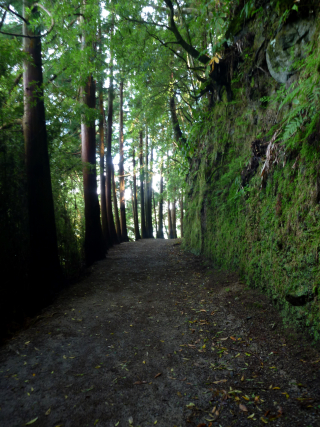 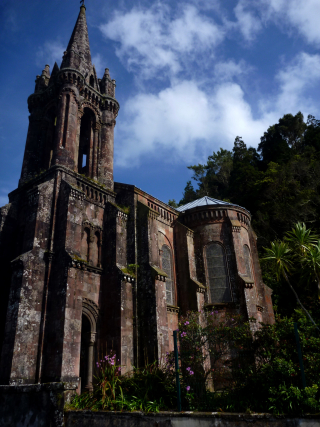 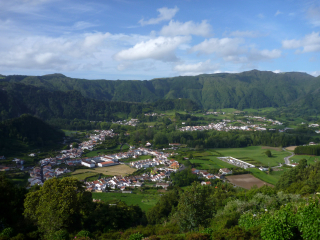 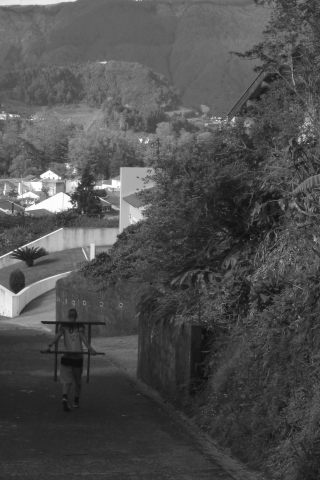 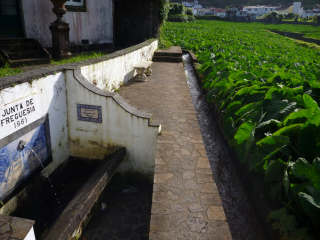 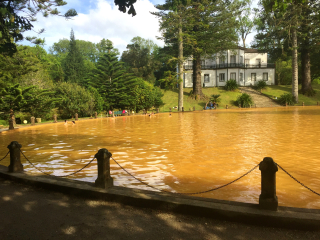 It was full of beautiful plants and hot springs. I was already running a fever of 103 so it was not what I needed. I walked around for an hour and then back for a nap. 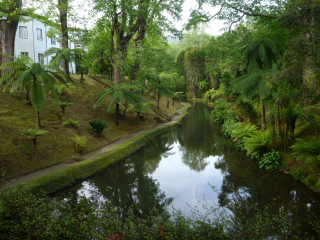 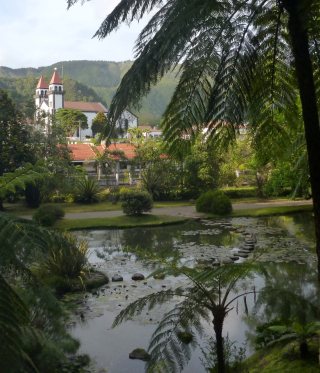 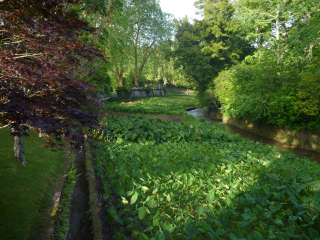 I ventured out around 11pm for a snack. I was hoping to catch dinner at one of the restaurants that served the Cozido das Furnas (a stew with meat, potatoes and vegetables cooked in the thermal pots) but all were closed. It was a cool little town and wish I had more time to explore when I felt better.

The next morning, I caught a taxi back to The airport for an early morning flight the following day. The taxi driver was amazed I got out here for 30 Euro and needed to charge me 35. I said that was fine, but the entire trip he kept talking about how he could not believe I only paid 30. With all the turns I was getting nauseous and would have given anything for him to shut up about it. I had not made hotel reservations for that night. I found a place, The Royal Garden Inn that was nice and would get me out of the cab ASAP. They let me check in at 11am and I went immediately back to sleep. 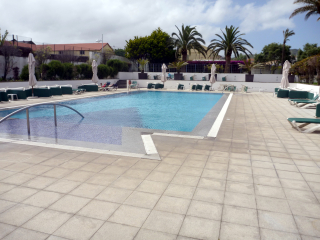 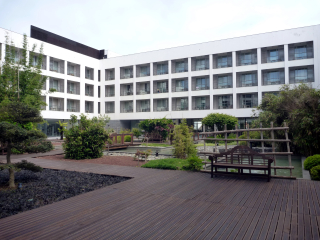 After waking up, I walked the harbor. It was packed with people in town for some Road Rally Race. 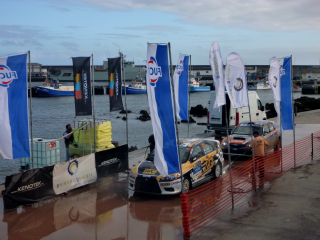 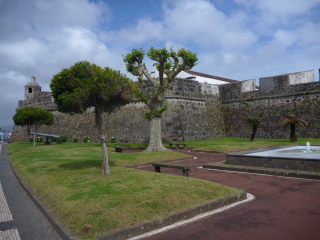 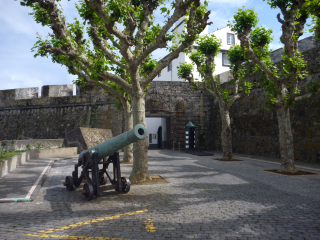 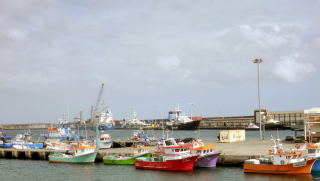 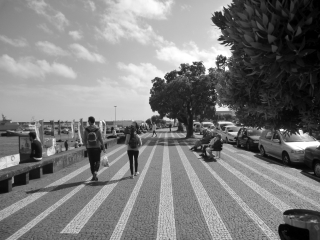 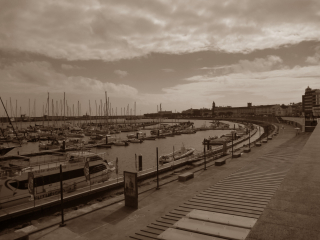 I was not eating much these days, so for my only meal for the day I found a small Tapas place and had some cheese, bread and Ham with a half-liter of wine.

It became my go to meal. I went back to bed as I had to get up at 5 am for flight out to Lisbon.