It has been a long time since my last confession and this one isn't exactly earth-shattering. How is that for a teaser? I was headed to Chicago to visit a friend and realized that I have never really explored Illinois outdoors. I spent a couple days and checked out some state parks online before catching a train to the Windy City. I admit that we are spoiled here in Michigan with beautiful landscapes and miles of beachfront but IL has to have something...?

This was not gunna be a ballz out backcountry weekend, more like a quick jaunt out into the rural areas for a breathe of fresh country air. I came across three parks about 1 hour west of Chicago:

I arrived on a Friday afternoon after working a long 12 hour midnight shift at the hospital. I was hoping to get some rest on the 4 hr train ride over, but the two 11 year-olds in front of me had been given an iPad by their parents and they spent the entire time reveling in its preinstalled games. Who knew that Spider Solitaire could be so riveting?

I got there and met my friend for drinks and an early night. The next day we were gunna hit the parks but we slept in and decided to check out the city instead. I have been to Chicago many times, but that was in a former life when I ruled the night, in my own mind. We walked the city and I would recall random locations, "Oh, that bush was my bed one night." and, "That 24 HR burrito stand is where Juan works, he let me have all the free chili peppers I could tolerate.", which for the record was one mild pepper.

Below is a shot of the "Bean" at Millennium Park along Michigan Ave. 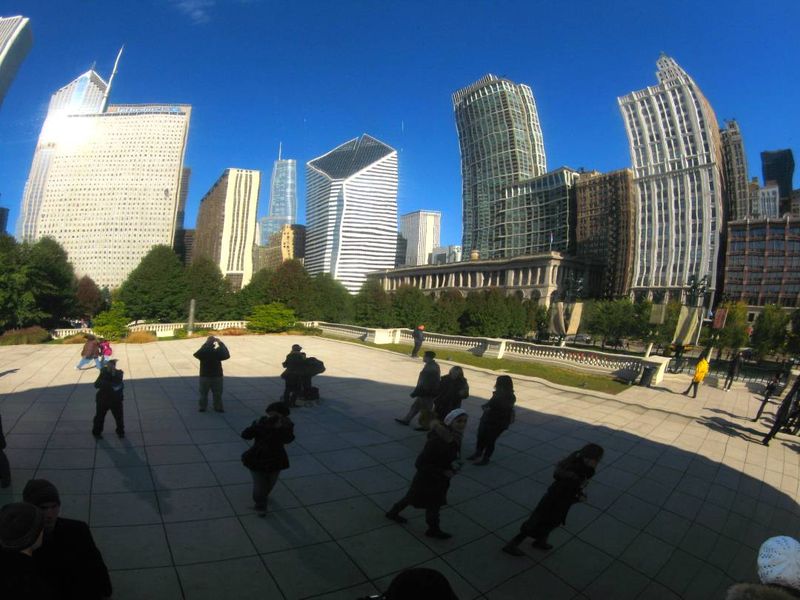 Here is a picture from the web that shows it in context. 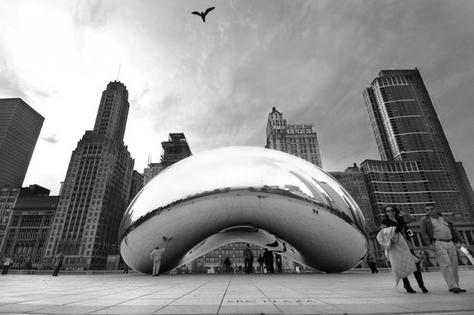 It was a warm fall day and the trees still had a bit of color for this time of year. 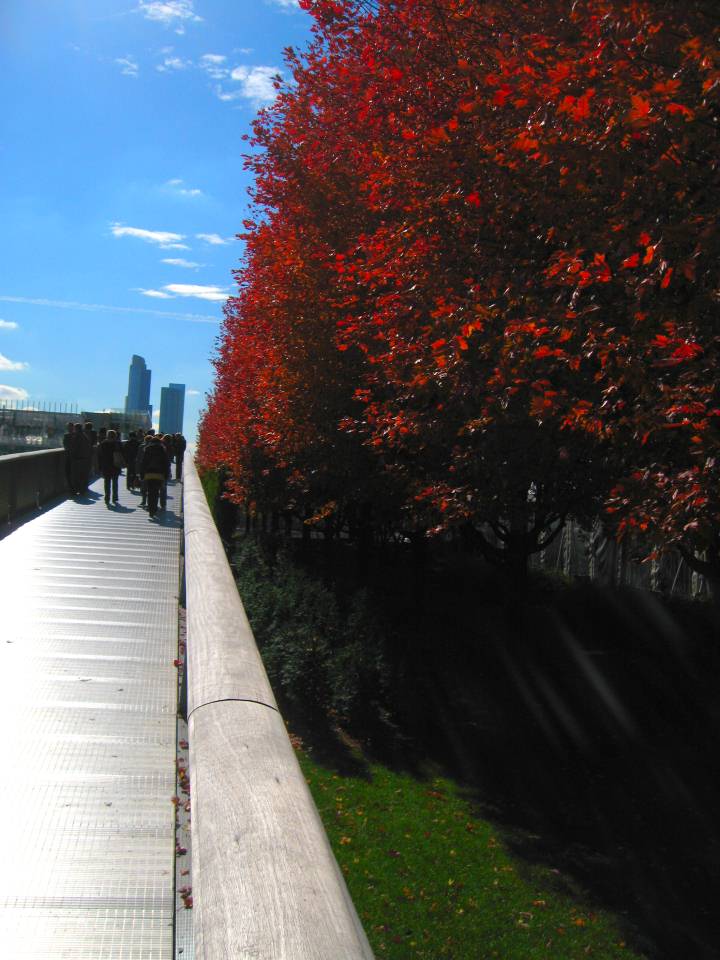 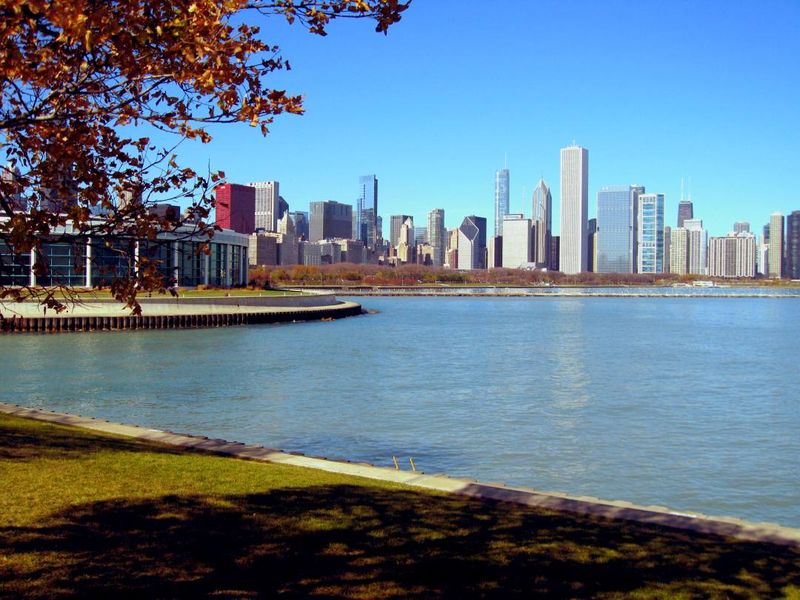 I love riding the "L" train. I feel so cool, like a big city stockbroker, closing deals, jumping from car to car, buying, selling, gun fighting with Wesley Snipes and jumping off the train right before it collides with an oncoming Semi that somehow got loose on the tracks.

I did make many rookie mistakes even though I really am not a rookie per say. I had to buy a ticket and could not get the vending machine to work. After getting help I tried to insert said ticket into turnstile and failed 4 times before the conductor of train actually leaned out the car and yelled to me that I was, "doing it wrong" I figured it out and boarded the train, muttering in Spanish to look like I had an excuse. The next time I approached with card in perfect presentation for the turnstile, it accepted and I proceeded. Only problem was that the bar would not let me pass. I looked back at guard and asked what is wrong with this, assuming a position of experience and agitation. He looked at me and said it wasn’t working because I was putting the card in the turnstile next to me. I recoiled, made weird jerks with my head and threw some facial tics in to look as if I was not all there. In my final confrontation I was determined to prove to my friend that I was indeed the world traveler that my minions thought I to be. I told her that we needed to board the pink line and get off at Germack. When we got to Germack and saw tumbleweed roll by, I realized that trains are named by their last stop, but that does not necessarily mean you are to ride to the end in all instances. You must read the fine print on those Google directions carefully.

Lost in the South Side of Chicago we wandered into a Mexican Art Museum and took in an exhibit on the Day of the Dead, which was cool, but I was not able to retain any bit of directional respect after that.

Here is the museum

From here we walked back to the city which covered about 4 miles. I was not going to confront the subway again unless absolutely necessary.

The next day the weather was cooperating and we headed out to Starved Rock State Park. It was about a 90 minute drive.

It is a walk along the Illinois River with the trail following a 60ft cliff and then returning back along the ridge.

Here is the trail map:

It was a nice hike, would have been incredible to catch during the Fall color change, but I am not gunna complain...too much. There are a number of plaques that call out the history of the area, calling attention to "Starved Rock" where Chief Pontiac made a last stand against the evil Europeans. 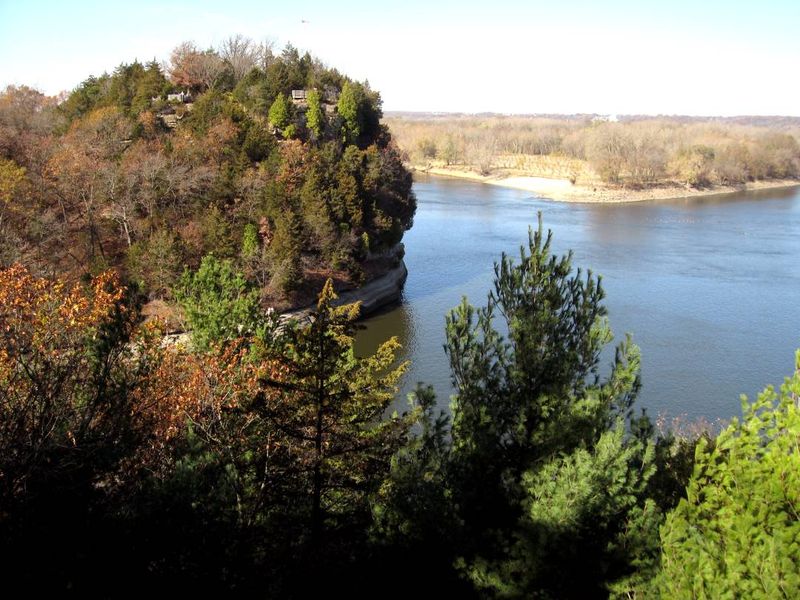 Here are a few other pictures: 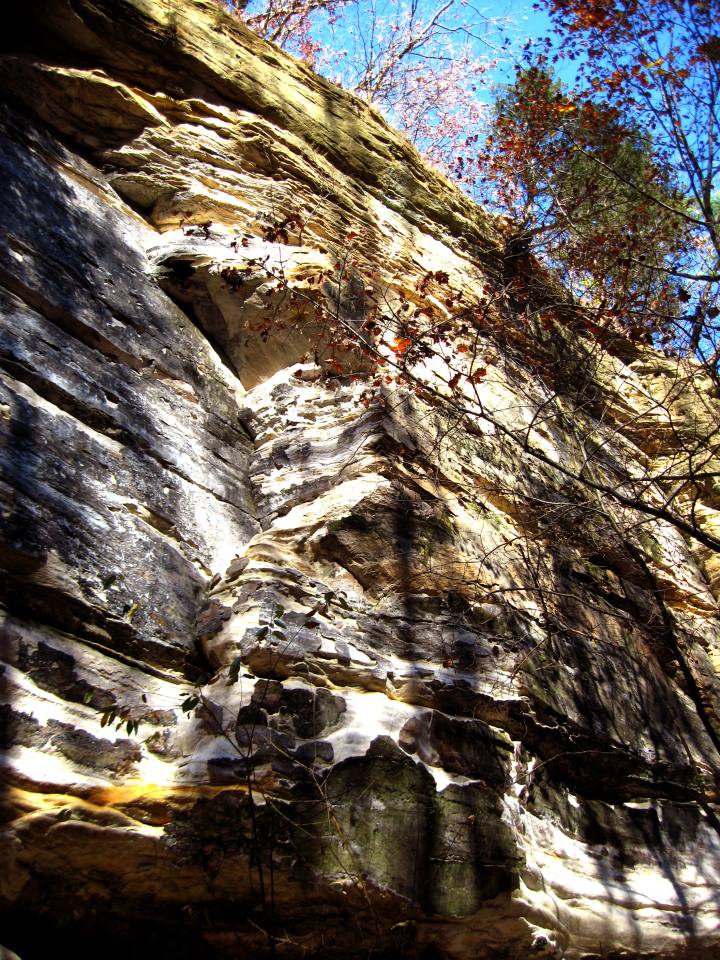 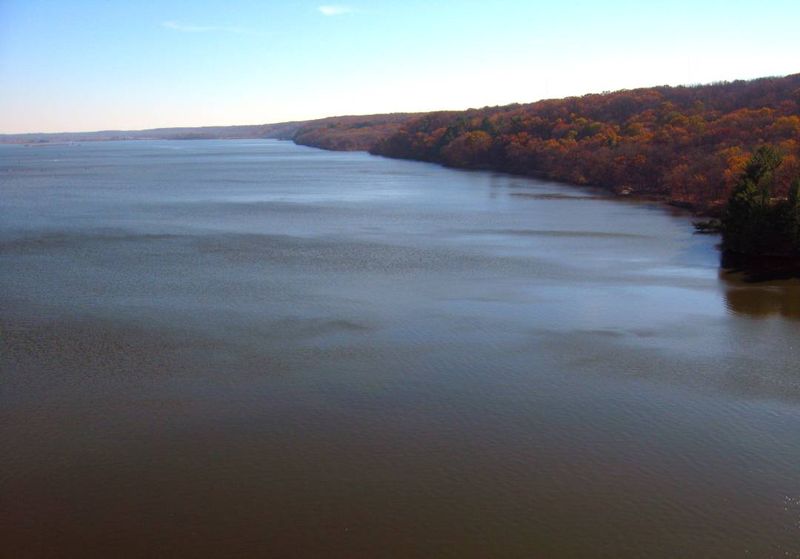 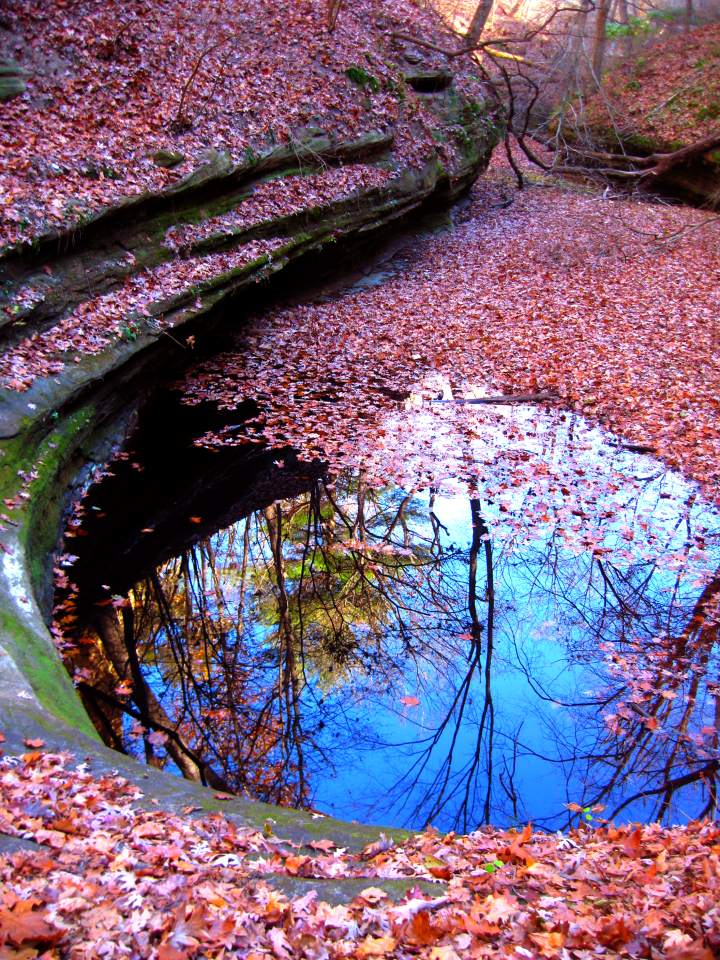 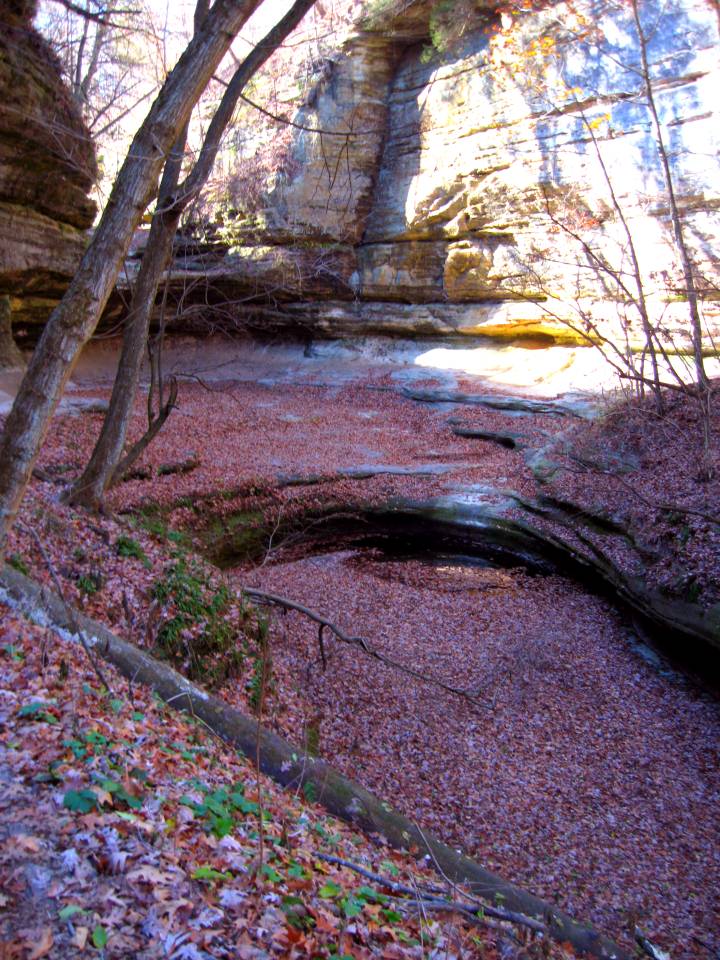 Next stop was Matthiessen SP

It was about 5 minutes from Starved Rock and a similar canyon, but deeper and closed in on both sides. It only takes about an hour to circle the "Dells" area. Here are a couple shots: 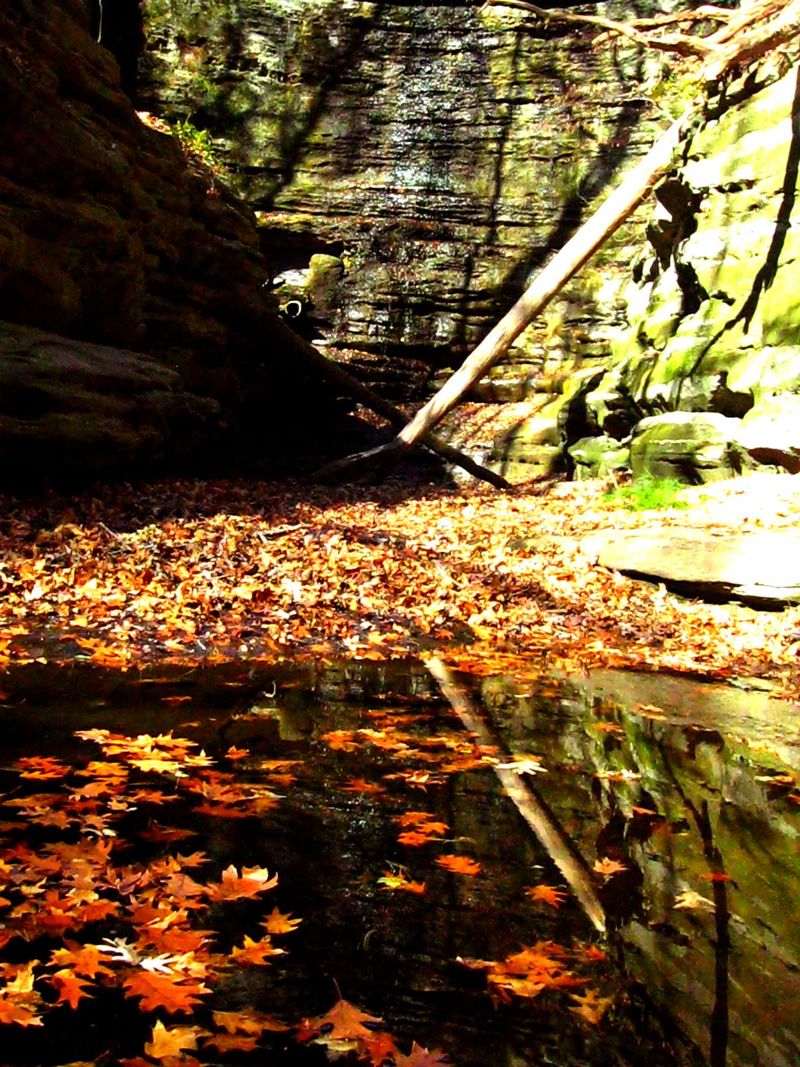 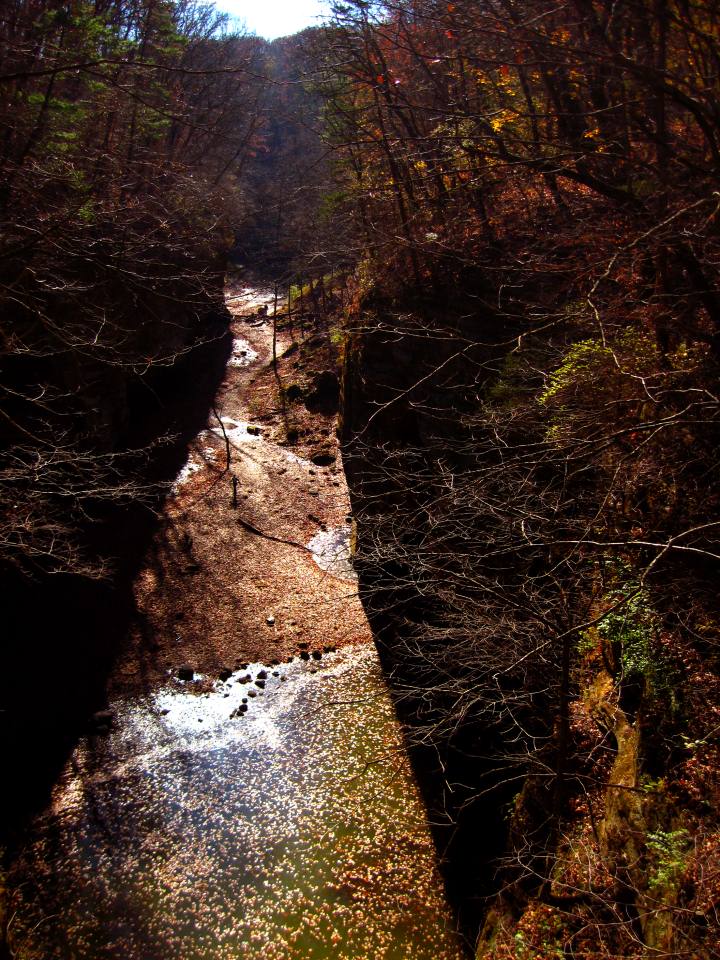 We made the trip on a Sunday and because the paths were a little more domesticated (paved) then I am used to, we dealt with a lot more humans than I normally tolerate.

The final stop was Buffalo Rock State Park. We did not make this stop, but here is the site and Buffalo Trail Map

It is know for the animal-figure-type-crop-circles. I included a  birds-eye view here.

The next day I headed back on the train. Normally when I take the train to Chicago I end up getting delayed by 5 hours or more because of construction, power failures or the time an ATV tried to out-pace us on the track and lost, and we all got stuck as it turned into a crime scene. True to form, I was delayed 4 hours. Why does the idea of taking the train always look so appealing on paper, but with my poor memory issues, turn out to be a poor decision in reality?

Link to Pictures From the Trip