I borrowed the title from a Warren Zevon song that I thought was appropriate. I was sitting around one day and realized I had to use 30K points on a credit card I was gonna close. I figured it was time for a trip and began searching how far I could get. My requirement was that I could afford to stay cheap for 7 days, which pretty much put me in . At first I looked at , but began to think it might be too touristy for me. I found some positive things on a message board about . It was safe, cheap, and beautiful. I was sold.

My points covered the cost and I spent the next 30 days planning in more detail then was healthy. I am not one that likes to relax on vacation, so when I go somewhere I want to see it all because who knows when I will be back. I will keep this short as I want to get to the trip, but I got the necessary shots, antibiotics, evacuation insurance, travel books, and supplies and was ready for anything. I will say, the Lonely Planet book on was incredible and made the trip a lot easier, but also took some of the fun out as well. Below is a map of 1st day’s travel 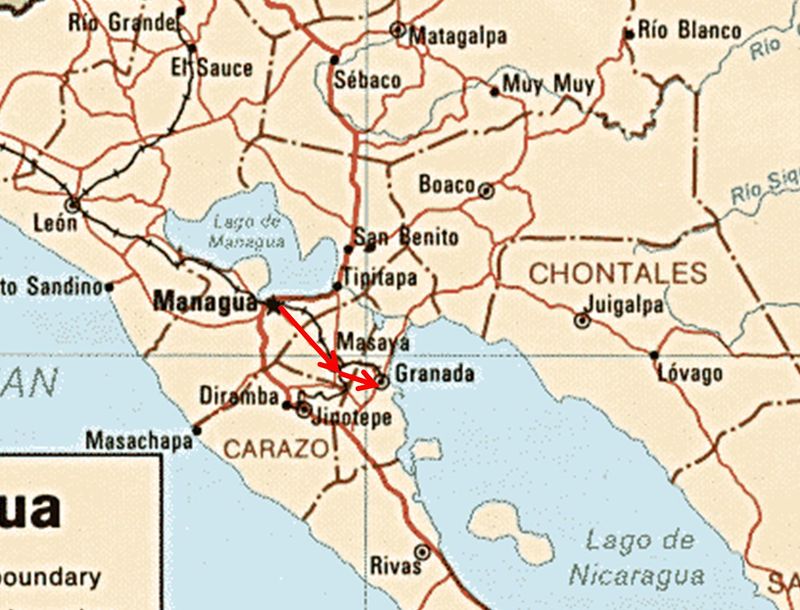 It was day 1 and I after an early morning flight; I landed in , the capital of , about noon local time. All research had turned up the same thing, was dangerous and get out of there ASAP. I was greeted outside baggage by multiple men offering cabs. I went to the corner of the airport and turned my bag inside out to change clothes and get all my priority items in pockets, purify some water with my Steri Pen (which was incredible all trip) and exchange some money. I had bought a belt before I left with a secret zipper in it (another great find). I had $100 US in small bills for emergency, but I needed some local Cordobas. After a bit I understood the conversion ($1 = C20). So I went to the cash machine and all it would let me get out was C200. This was $10 and I knew that the country was cheap, but would not get me too far. I ended up taking dollars out and taking to exchange and off I went. I crossed the street from the airport and found some cheaper taxis. Jose picked me up and we were off to the bus station for Masaya. Jose convinced me to let him take me to Masaya, as they all try to do, because it would save me time, which was a priority of the day. It ended up costing me around $20 instead of $2 for the chicken bus (which I will describe later). Driving out of the city I began to see that anything goes. Below is a snapshot of 2 guys riding in the back of pickup holding a fence up. Not something that flies in the to be sure.

We also stopped for a minute to take a picture of this active volcano outside Masaya. If you look close you can see the smoke billowing out. I was looking for gifts to give the children while in instead of money, and settled on homemade thread friendship bracelets. My first victim was a 6 year old girl approaching the cab at stop light requesting cash. I offered a bracelet, which she let me tie on and then reached for more, gaining confidence. I felt like I was being attacked at a car window by a Grizzly in . I rolled up the window and told Jose to get out of there. I had another encounter a few lights down which went a bit more smoothly. After snapping a picture of Jose in the market of Masaya, I left his company and strolled the shops. 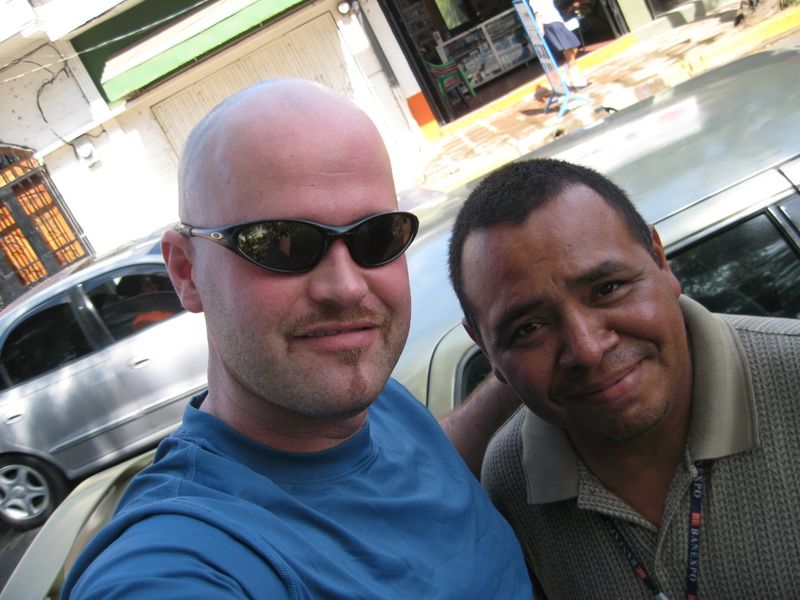 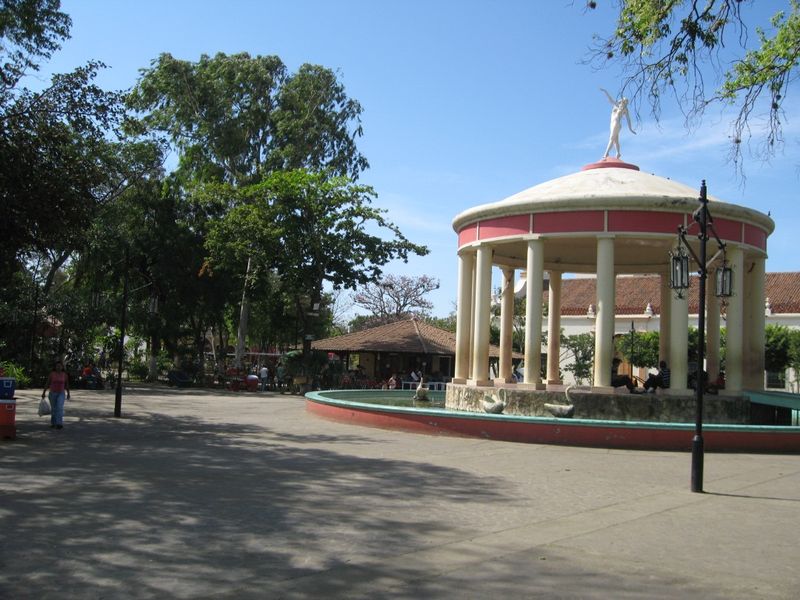 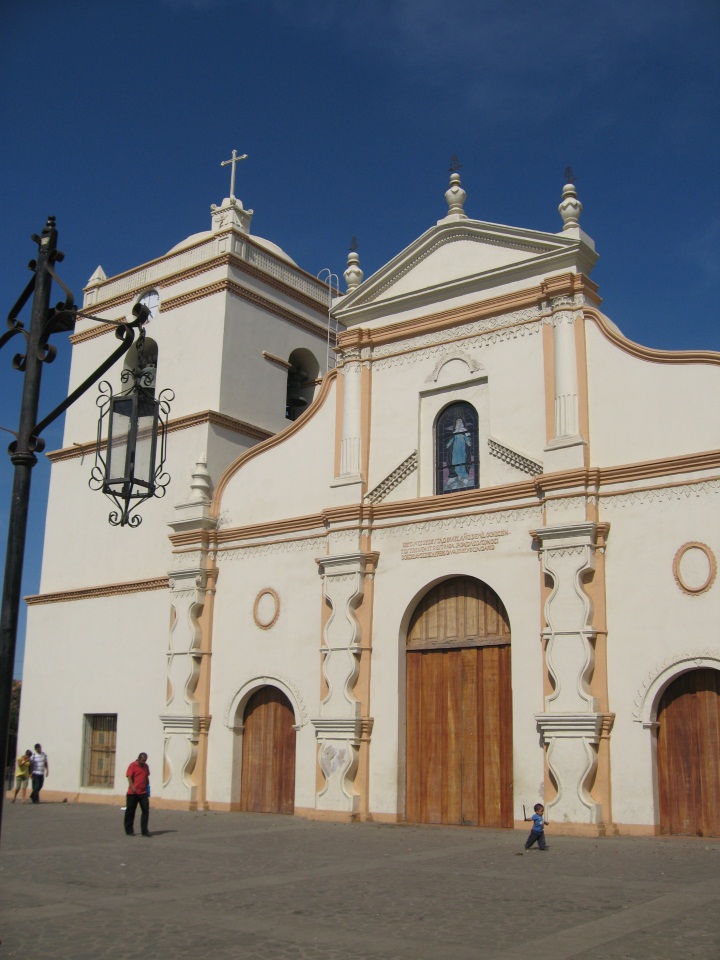 This was supposed to be the center for authentic merchandise from , but it was really just tourist trash. Some shoe shine boy lead me on a walk throughout the city that ended up at a hotel, when all I wanted was the bus station. Fortunately some guy from MIT strolled by and led me to the bus station. The bus stations are all similar throughout the country. The 30+ recycled busses from the all painted and modified, with some running a bit smoother than others. My friend yelled for a bus for and when found it, he opened the back door, shoved me up and in and said, "Darren, you are off on your journey, welcome to ." I sat down and started chuckling because I was on a bus bound for somewhere with all these people that were starring at me while they ate chicken sold in bags and fried dough. I could be being sent to a prison camp for all I knew. The bus operation was hilarious to say the least. Every few minutes someone would yell to get off and the bus would stop, the guy in the back would throw bags of fruit out the door and off we went. When he picked someone up they would climb in and you would see the guy in the back scamper up to roof and then back through the door....all this was done while we were going 40 mph down the hwy. Here is a picture of the acrobatic bag man on my bus. 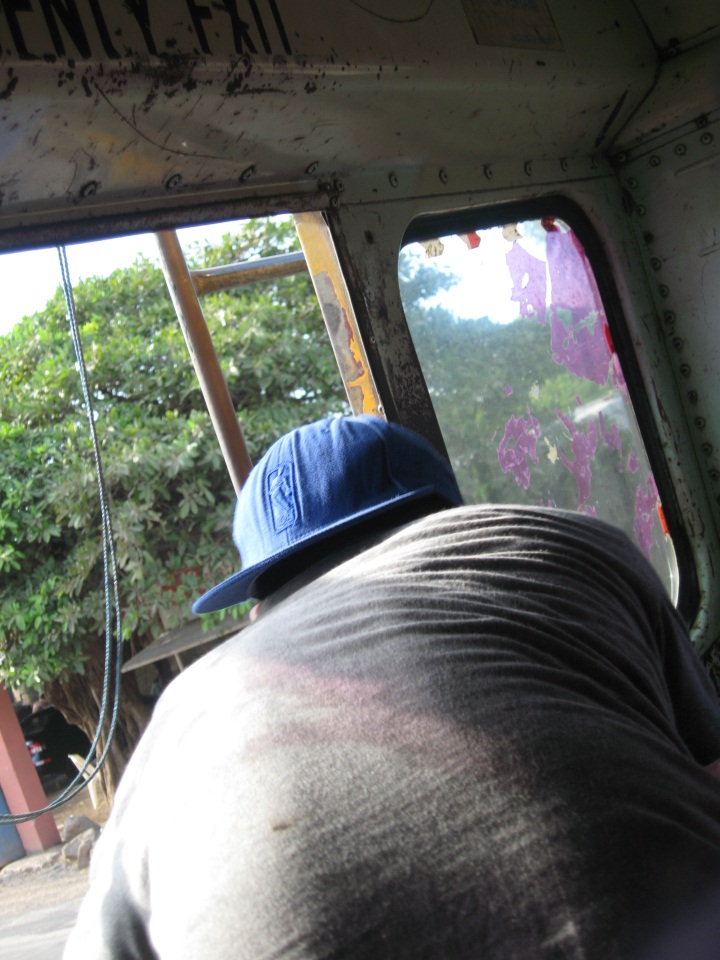 I had to skip Laguna de Apoyo for time reasons and ended up in around 4pm. I dropped stuff off at hostel. They had no room, but said I could sleep on floor, which was fine by me. The city was beautiful, probably the best of the trip. I took lots of pictures of the churches and markets, where they sold everything from drinks to pigs. 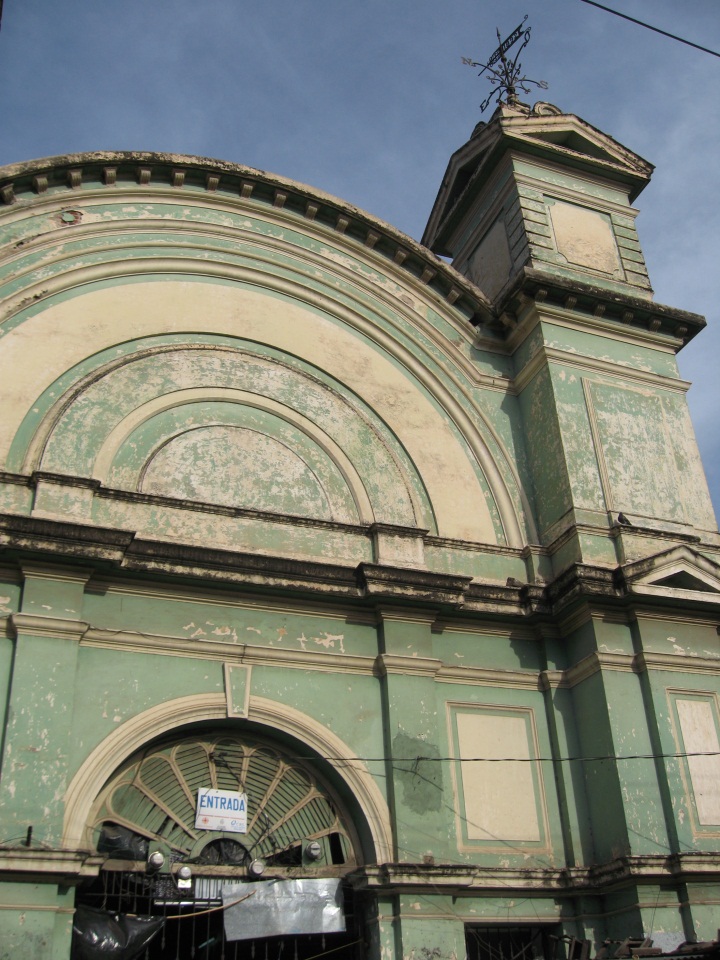 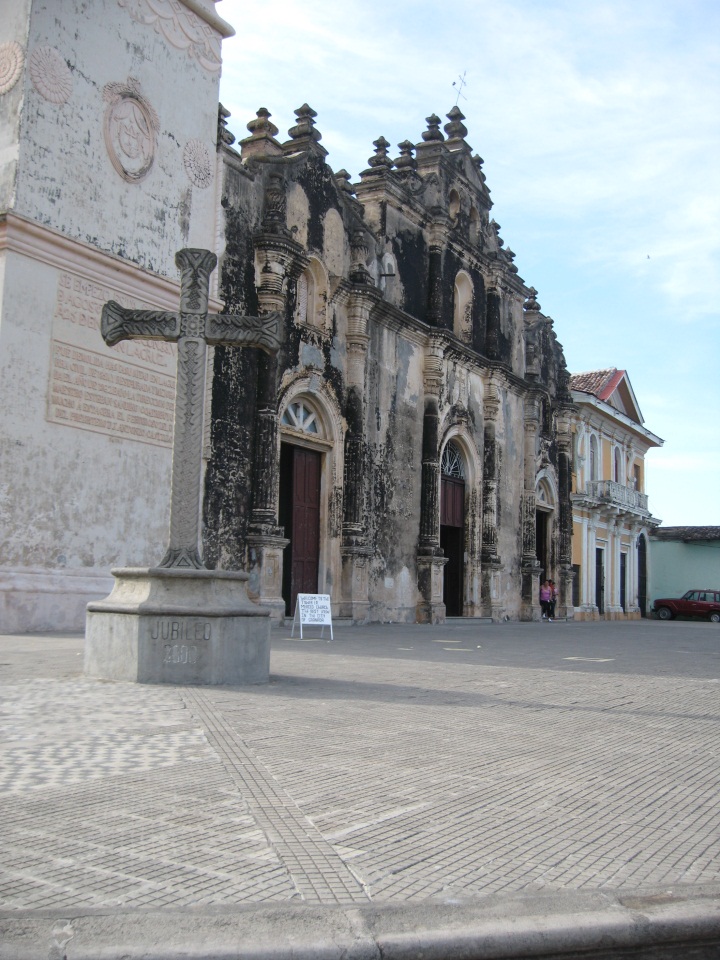 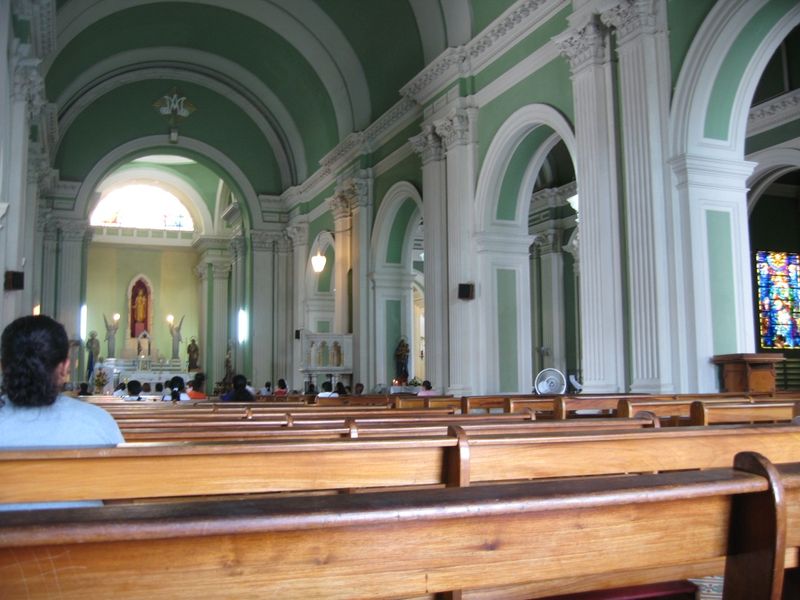 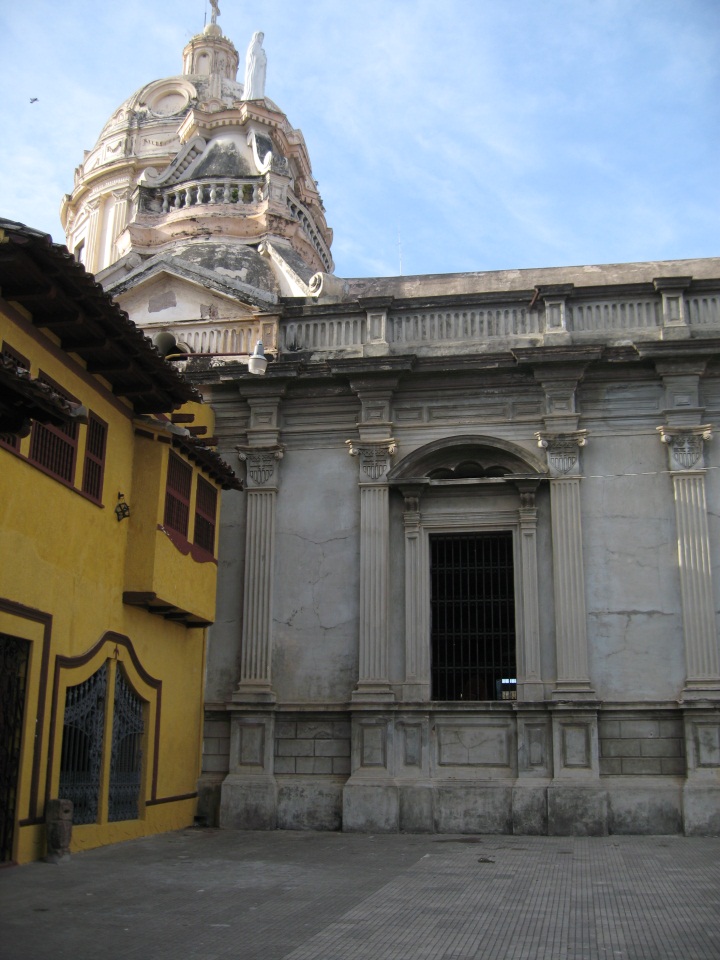 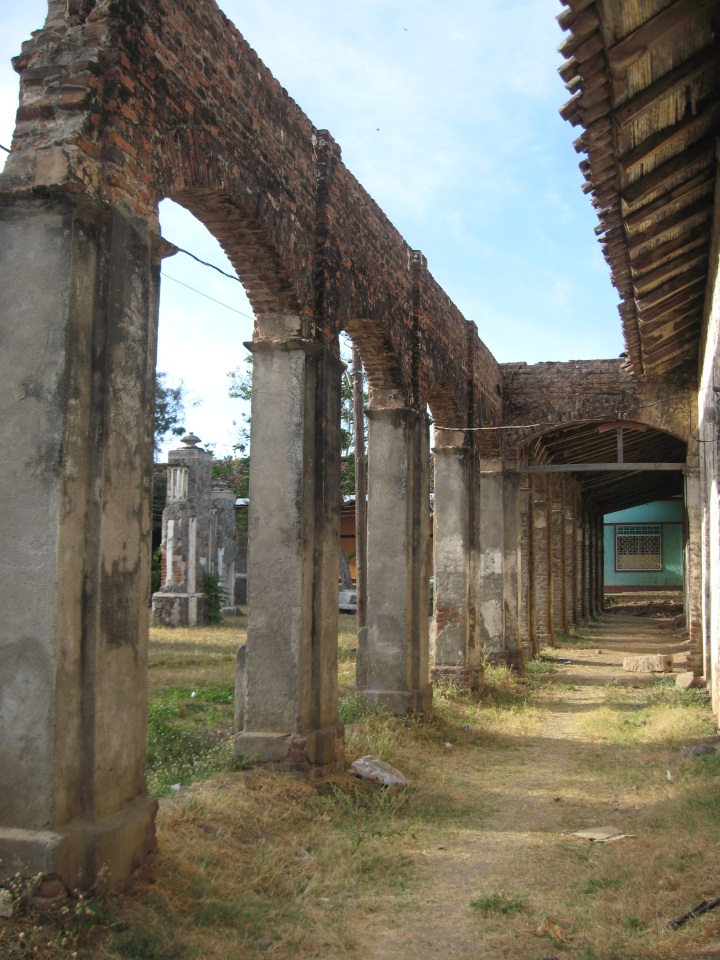 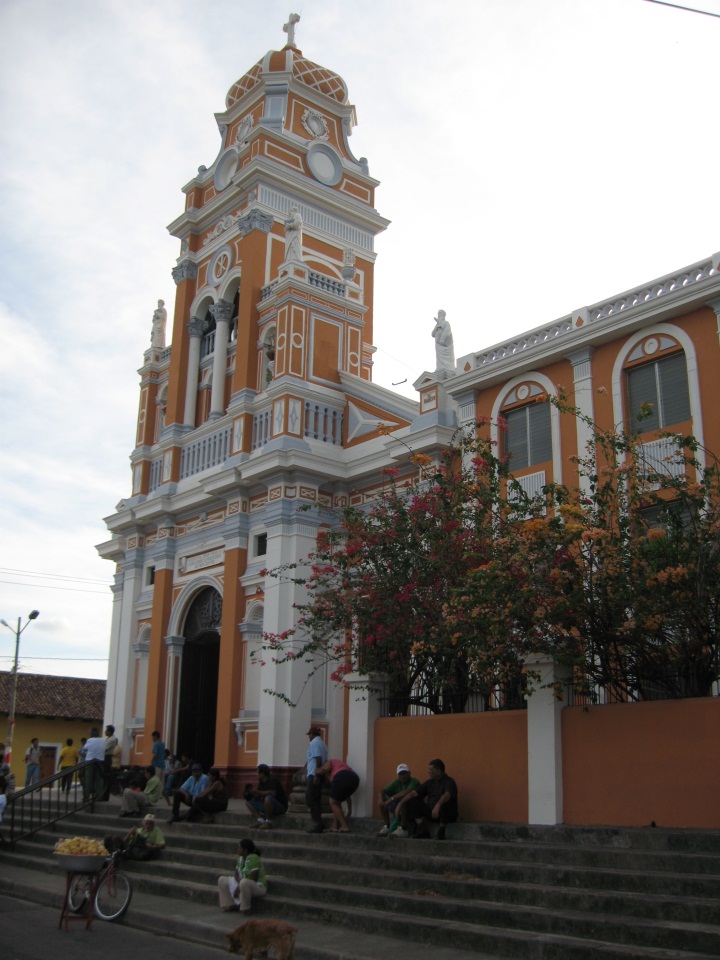 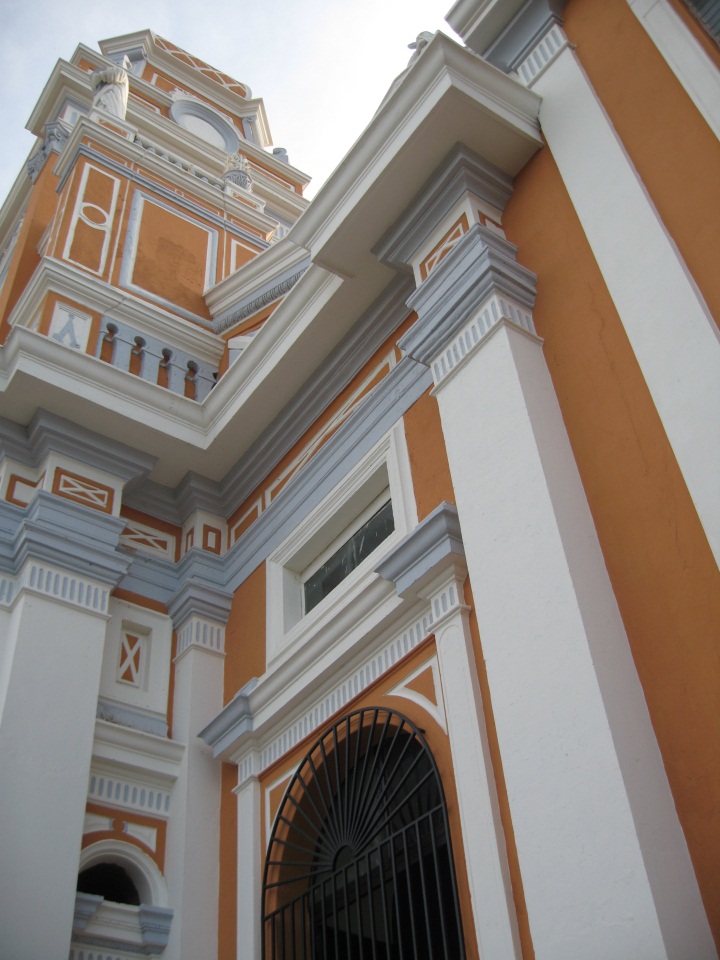 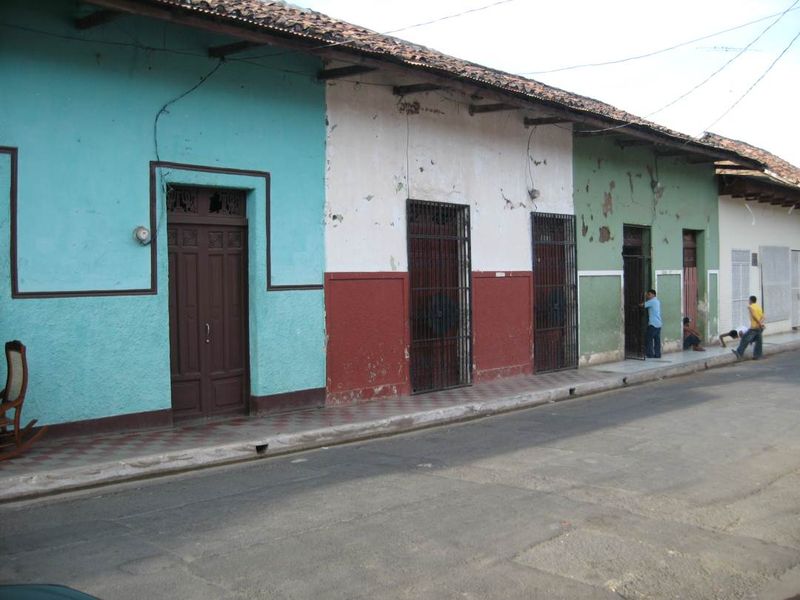 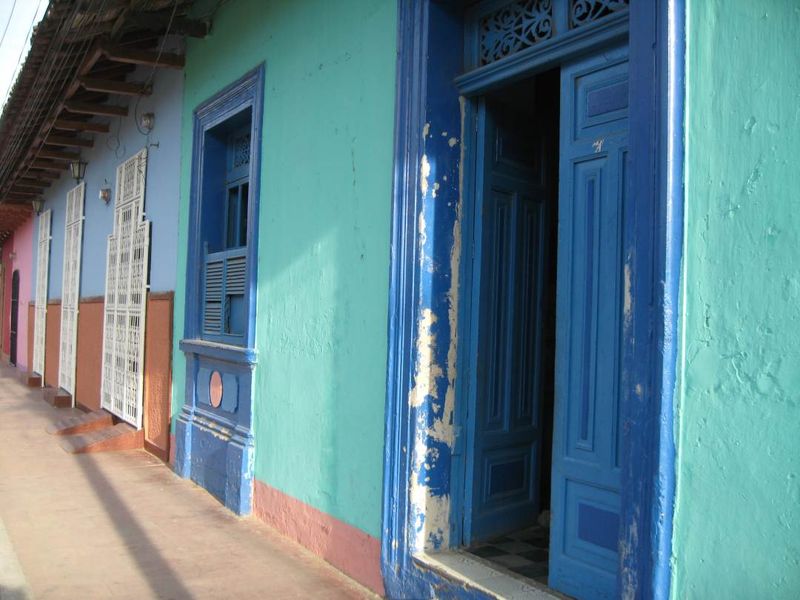 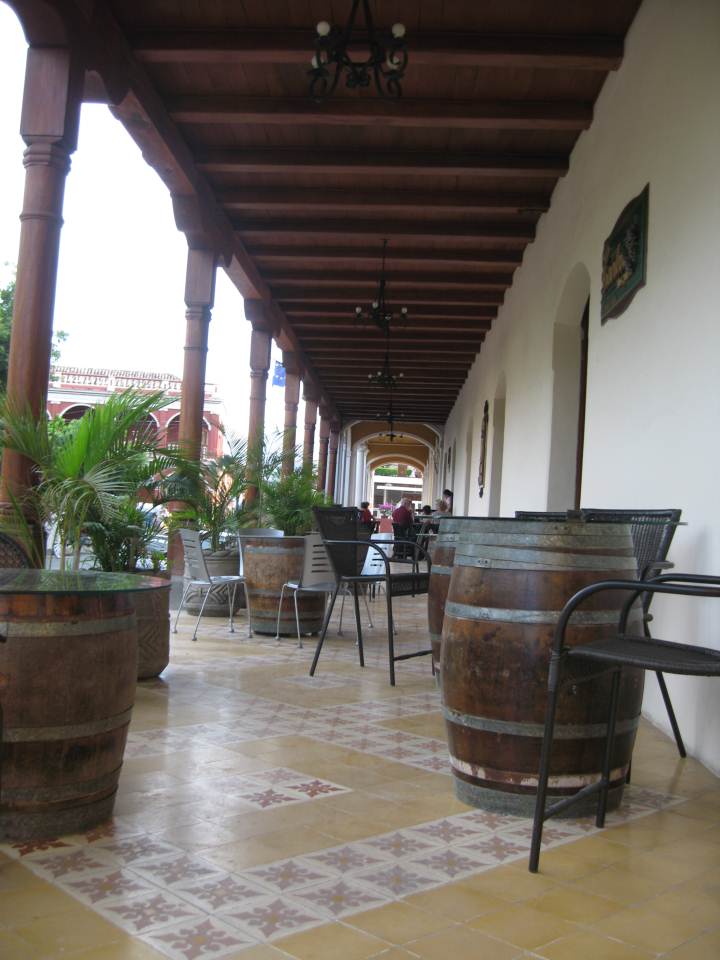 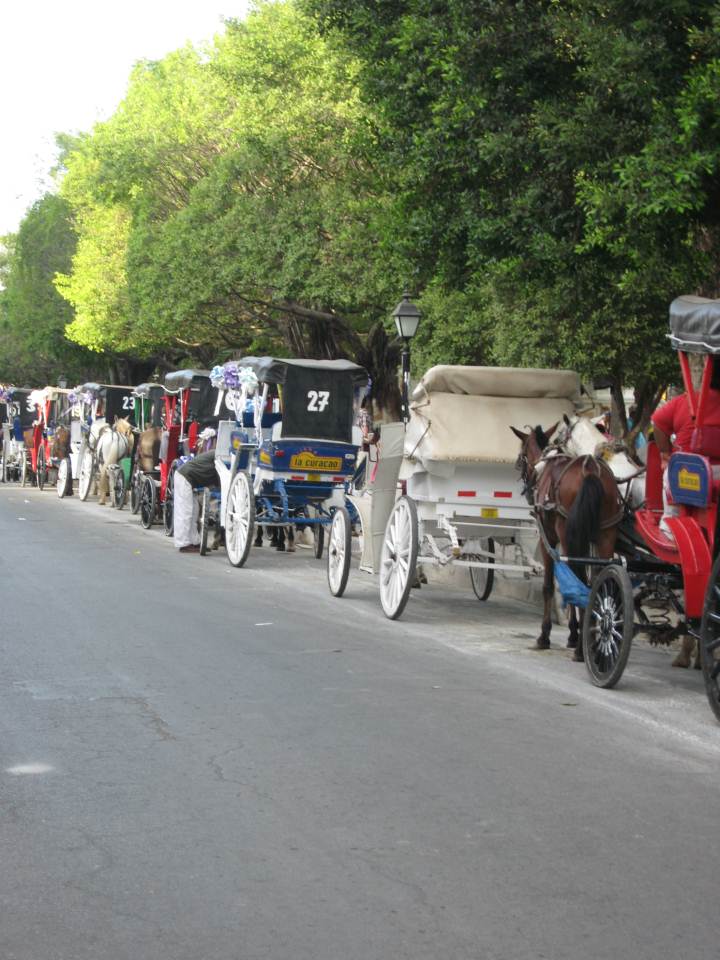 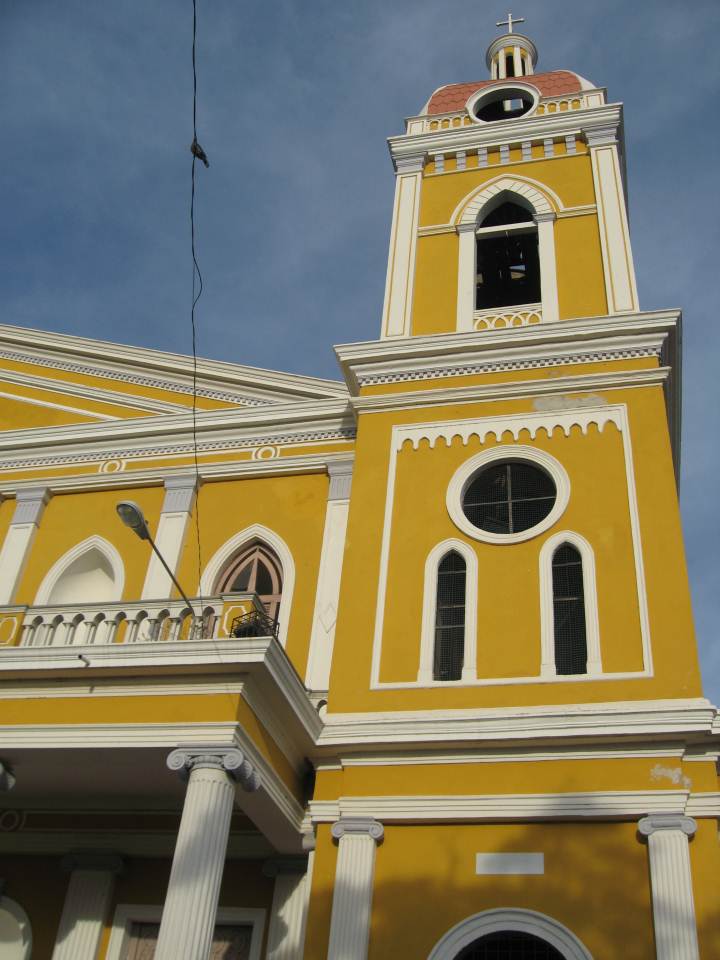 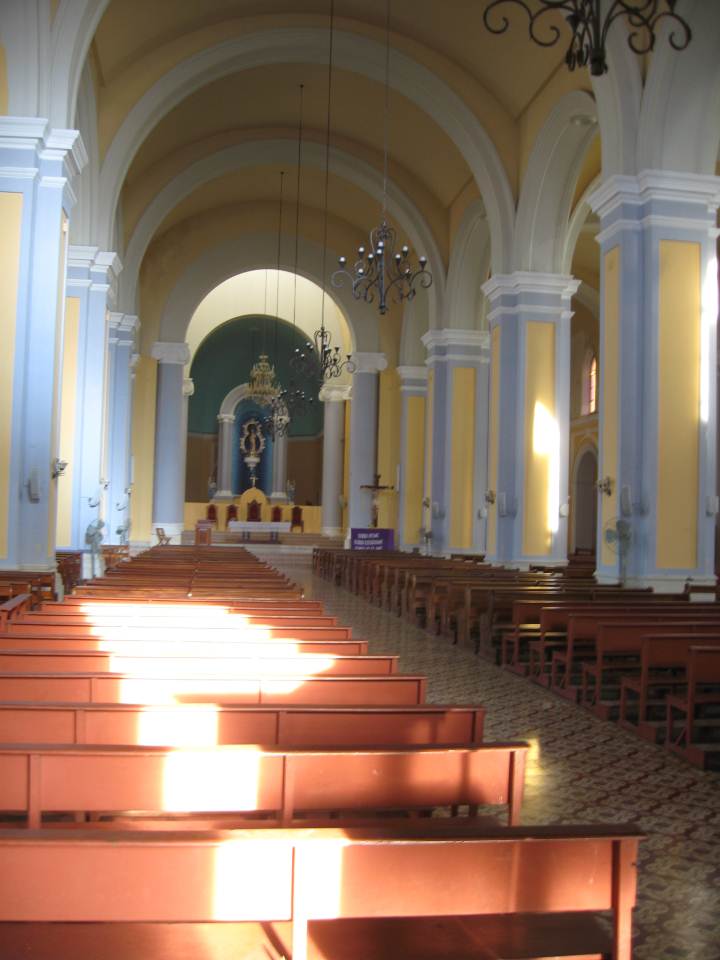 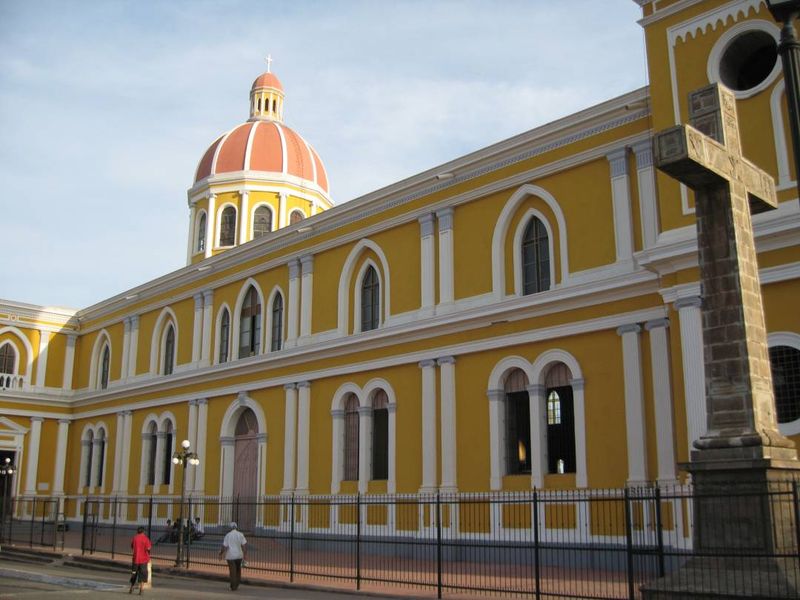 Around 5pm I stumbled into a procession in the street. They were carrying a cross and stopping at various buildings. They were pretty dedicated as they passed a bar I was at around 11pm later that night. 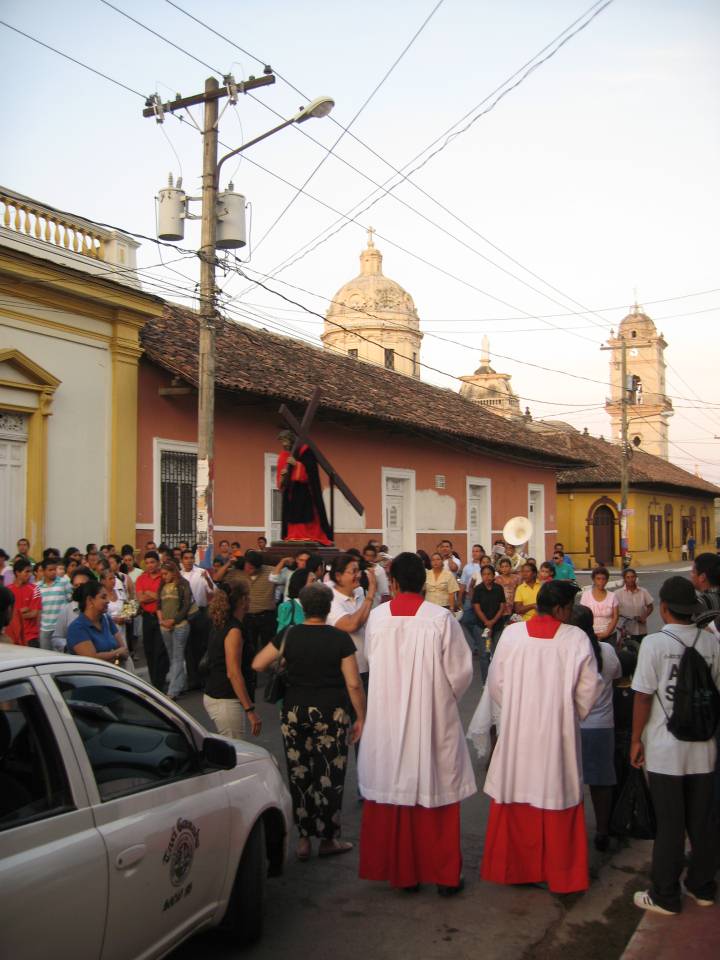 I had more ground to cover, but it was getting dark and I knew better to stay outside at night so I grabbed this quick shot at a fort and headed for some Bohemian bar near to hostel. 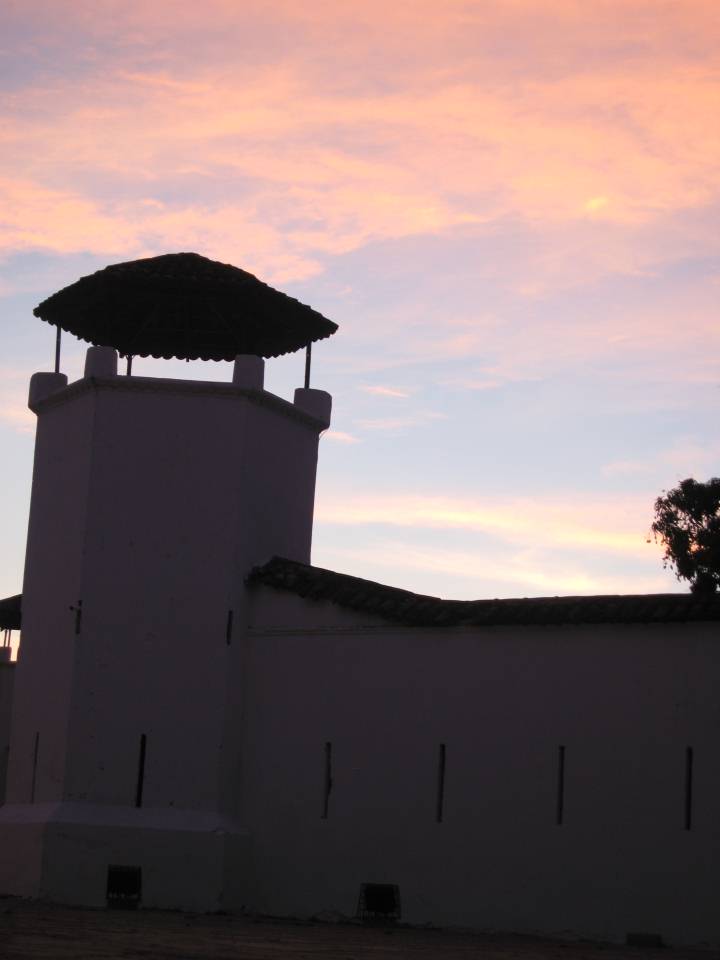 There was no one there so I spent time talking to Tatiana, the bartended, who was a local going to law school up in . Then the bar owner came in, a girl about my age named Heidi from the , and we had a few drinks. Finally a reporter showed up when was educated in , and our wolf pack was complete. 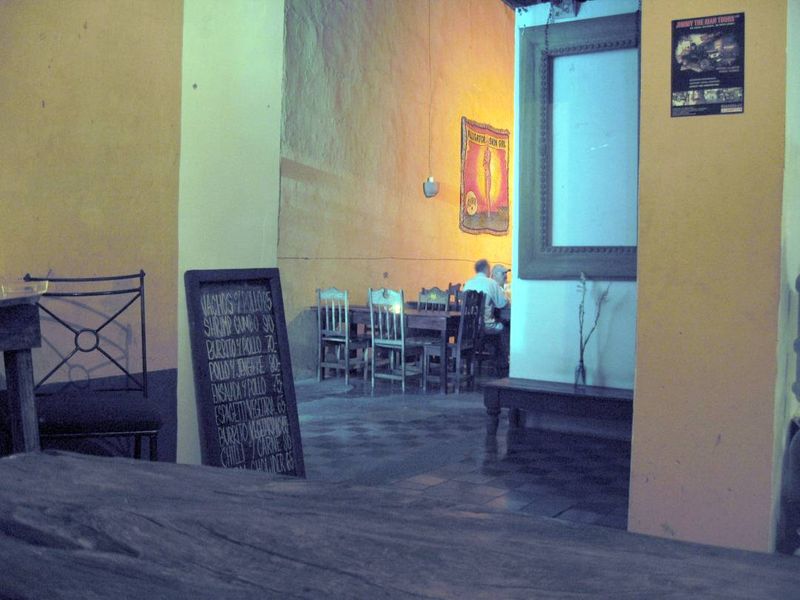 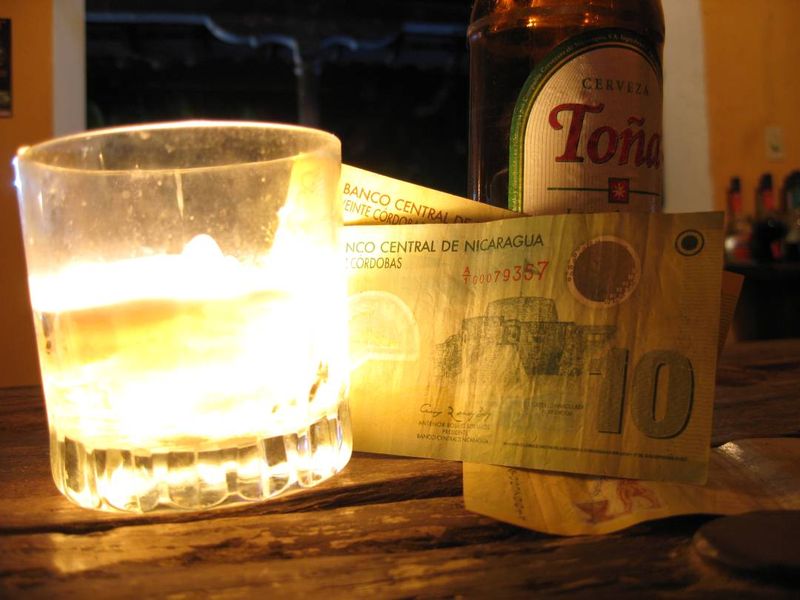 After sampling the famous rum, we closed down the bar and they took me to a famous local joint where the ladies showed me how to dance and I looked like the typical American. I realized that most locals were not too excited about Americans I suddenly decided to be from for the rest of the trip. I got home around 4am, slept on the floor for 2 hours and got up to walk some more of the city and make my way to my next stop.

Thought for the day:

I was amazed at how much trashed piled up along the streets and roads of . I assumed that with a poor culture that depended so much on the land for their vitality they would be more aware and aggressive in saving it, but it was explained to me that survival was the goal and thoughts about the future were secondary. It left me concerned not only for but also for the as we strive to be more aware of our own carbon imprint.