Michigan has just suffered through the worst winter on record. Normally we get hit with a blast, it hangs around for a few days and then melts, but this time was different. The snow came in December and never left until March. We had permanent snow banks and the sidewalks were covered with a constant layer of ice. As I struggled through this Blizzard Affective Disorder I did appreciate one thing; I no longer have a desire to travel to the Arctic and walk on a glacier. I had been walking on one for the last 3 months.

I started this blog back in 2007. It was meant to be an interactive diary of sorts and I guess not much has really changed since then. I was hoping to be able to say, “And now it spawned a worldwide phenomenon”, but I digress. Anyway, the first trip out of the gate and the one that really had a profound impact on my direction in life, along with starting my travel company, was called the “Grand Circle”. Basically a tour of a number of National Parks in the Southwestern States. Here is the link to that trip

The first stop on that trip was Zion National Park in Utah. It turned out to be my favorite spots due not only to the views, but also the challenging hikes.

So, returning to modern day; I was thawing out and decided that a cheap flight into Vegas with a 2 Hr rental car ride to Zion might help get the spring started. My rough plan was to do a couple brief hikes and then attack something called the Trans-Zion Trek, basically a 3 days hike from the West to the East entrance of the park.

Here is my itinerary as it was intended

The trip started on a rough note as I broke my thumb before leaving and would be in a cast for the duration of the expedition. On the upside, it is always nice the get the injuries out the way before I got too far down the trail.  Not to worry, there would be more.

Of course I flew Spirit Airlines to Vegas. I can’t turn down a cheap upfront cost, only to deal with the BS and headaches later. Unlike most airlines, Spirit does not update the status for their flights online. So when I arrived at the airport at 7pm for my flight I learned that it was not going to fly out till near midnight. Of course checking my phone showed the flight still “On Time”  This meant it would be a long night. We got off the ground and hit some serious turbulence over the Rockies. Normally I enjoy watching people squirm during the rough patches, but this was pretty bad. I began to wonder about the stability of Spirit’s aircraft. If they are so cheap, maybe their planes are cheap as well? If they skimp on the peanuts and water, what else did they skimp on? We made it ok, and I made my way to the car rental. I could not wait to get out of Vegas, the last place on Earth I wanted to be stuck. I got to the rental counter and they asked me if I wanted to upgrade to a Camero. I declined, and then they told me they would have to give me a Camero as they did not have the full size vehicle I reserved. I loathe car rental agencies and their snake oil salesmen. Although a new Camero might be cool, I knew I might be sleeping in this car and wanted a 4-door at least. Eventually they found a Dodge Charger for me and I was off.

By now it was about 2AM local time. I drove for about 2 hours and needed some rest. I was about an hour from Zion, but it would do me no good to arrive earlier than 8AM as they would most likely kick me out of any parking lot I tried to sleep in, and there would be no campsites available at this time. I stopped at a Best Western and slept in the car for 3 hours. I continued onto the park and made it just in time when the South Campground was opening up for First-Come campers. This means that they do not take reservations and you just drive around at first light looking for people leaving from the night before. I was able to grab a less than ideal spot by the main road, but I was happy as I had stuff to get done and did not have time to screw around. 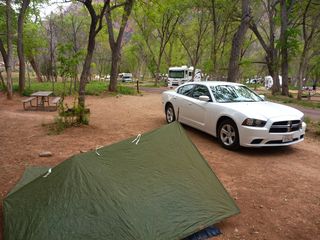 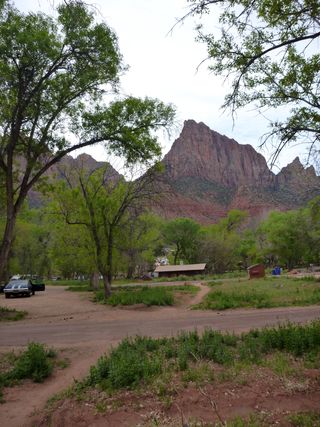 If you want to hike a popular route in most parks you have to reserve a spot months in advance. But the park also keeps some spots available for “Walk-In” hikers to pick up the day before. So I was hoping to hike a place called the “Subway” tomorrow, which required a permit. By arriving at the office when it opened I was hoping to get one of the few walk-in permits. I was in luck and was all set for tomorrow’s hike. The Subway hike said it required some scrambling and I was nervous that the Ranger might not let me go with a broken hand. So when I filled out the paperwork I kept my left-hand below the desk and only used my right hand. I must mention that I am left-handed. So it looked quite comical as I was hunched over this form, biting my tongue, trying to slowly carve out letters like a caveman.

Once that was over, I headed back to camp and gathered some supplies for a day hike. I could have tried to sleep, but was too anxious to get out there and explore.  The hike I chose for today was called “Observation Point” To eliminate traffic in the park, the park requires you to use their shuttles from the visitor’s center. 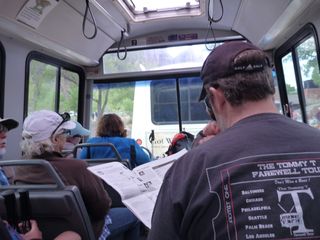 I should also say that Zion is basically a big Canyon that runs North to South. Below is a PDF of the park, showing the main valley in the bottom right. The rest of the park is all backcountry and I would be seeing that on my Trans-Zion Trek

So I took the shuttle to the Weeping Rock Stop and started off. Basically all the hikes in that main North-South canyon start on the canyon floor and hike up towards the rim in some fashion and duration. Here is the description the park gives for this hike:

“The hike from the Weeping Rock Trailhead to Observation Point is a Zion classic and the viewpoint at the end of the trail is an iconic image of Zion National Park. The Observation Point Trail is a strenuous 8-mile (round trip) hike that could take between 4 to 6 hours and involves a lot of unrelenting uphill on a hard paved trail that was blasted out of the canyon walls. Along the way, hikers get a glimpse into the dark and mysterious Echo Canyon with its beautiful slickrock formations and stunning White Cliffs. While this hike isn't as exposed or fear-inducing as Angels Landing, with an elevation gain of over 2,100 feet, Observation Point is a more strenuous workout!”

So it was basically a bunch of switchbacks to the rim. 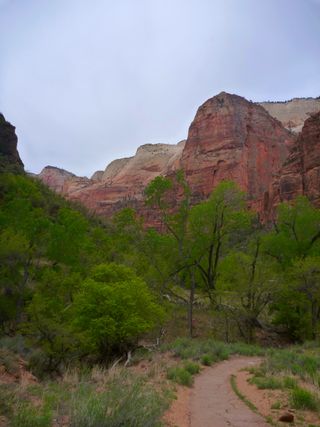 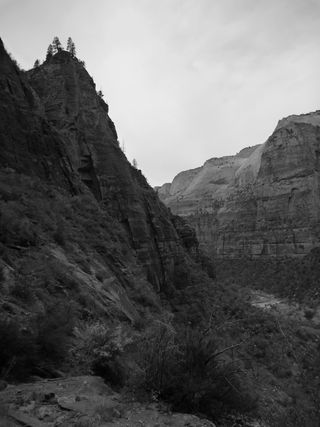 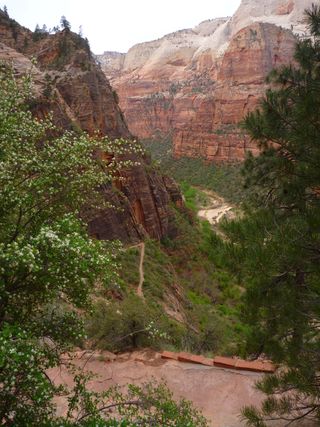 Below is a look back down into the canyon from about a 3rd of the way up. You can see the Virgin River, which carved the canyon. If you look close you can also see a shuttle in the distance, as the road follows the river towards the last stop where the “Narrows” begins 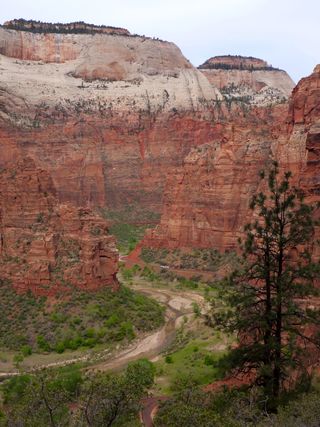 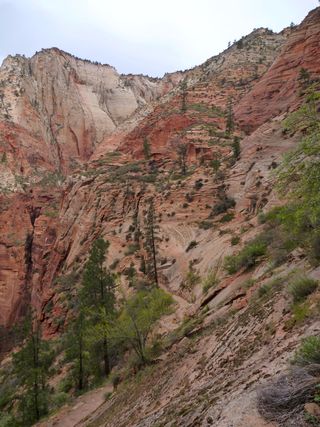 Below is the EchoCanyon mentioned in the description. You work away from the main canyon through Echo and then weave back again towards the Virgin River. 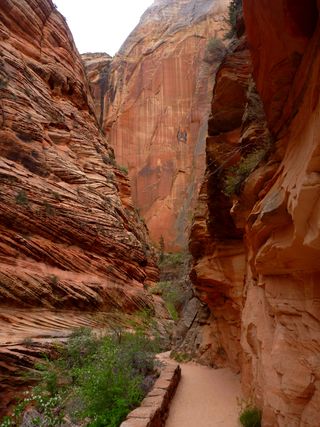 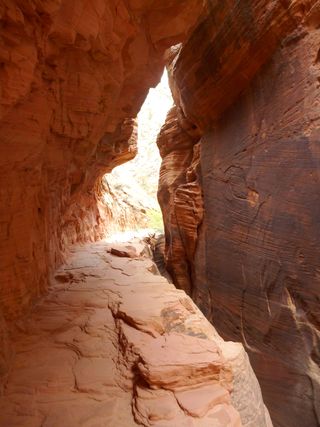 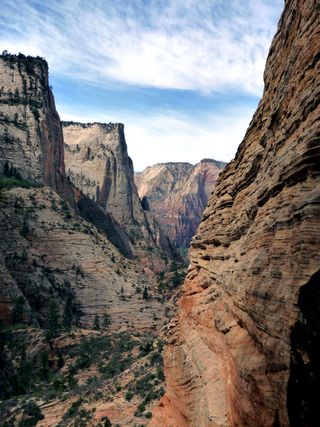 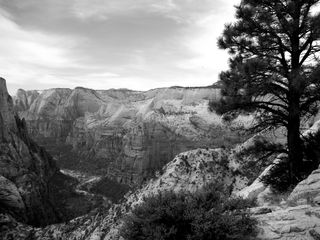 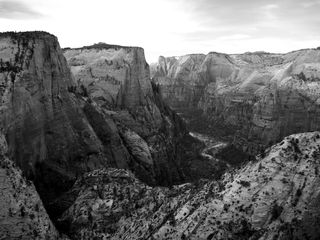 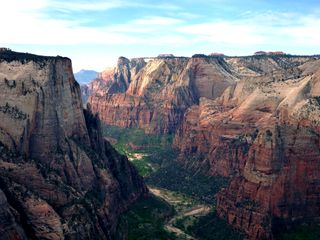 Below shows Observation Point. Although I was already on top, I had to work west a few miles to get to vantage point that looks directly back down the canyon 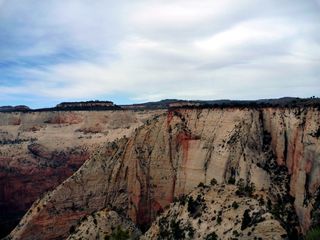 Below is the path leading up to that point shown above 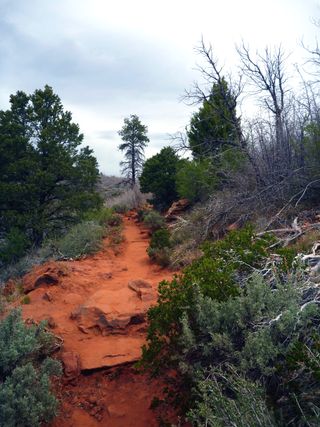 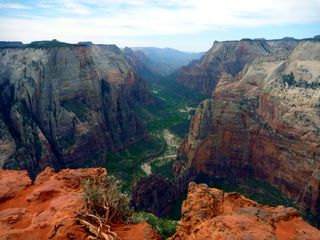 It got a little crowded at the point, but not too bad. More annoying than the people where the chipmunks. They were conditioned to people and had absolutely no fear. This guy was climbing up my shirt trying to get my Clif Bar 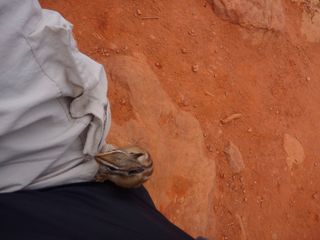 The one downside of Observation point; there is a back way to get there. A road climbs the canyon midway through the canyon and you can park along the road and get to the point with a 1 mile stroll. Cheaters!

The final 2 shots are coming down. The first shot actually shows an offshoot trail to the upper left that goes to “HiddenCanyon.” I was planning on doing this but my time was getting too short. 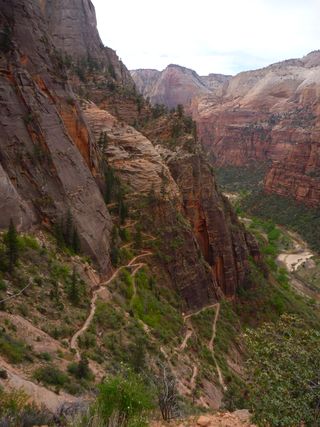 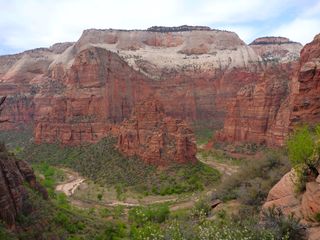 I boarded the shuttle and made my way to the, “Narrows.”

I had actually hiked this section back in 2007:

It is a slot canyon where you alternate from hiking on sand to wading through freezing water. Last time we did it in the end of November and it was frigid. I was not planning on hiking it today but wanted to hike the mile to the start to reflect on that day.

When I got the start of the river I came upon a mass of people. 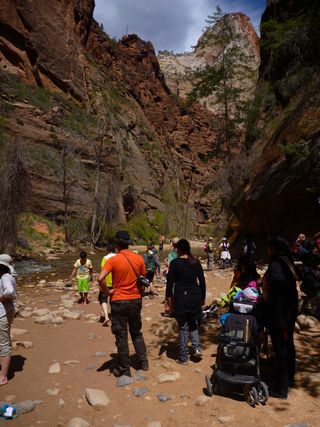 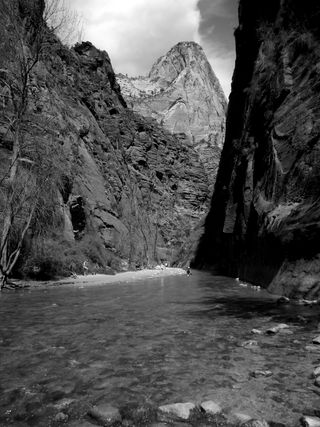 A far cry from the 5 or 6 people we saw back in 2007. I sat for a bit and then worked my way back towards the shuttle 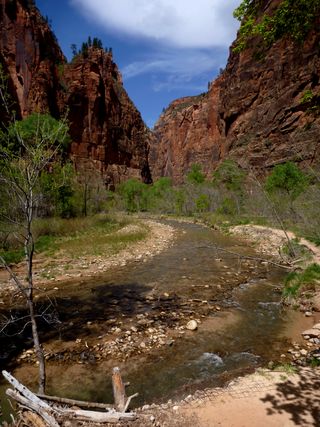 Before getting on the shuttle I filled up my water bottles. After drinking about a liter I walked around the building and saw this 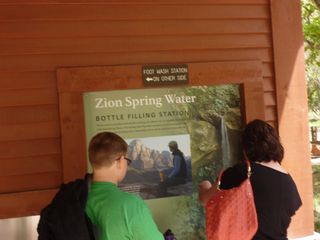 If you look close the sign says “FootWash on the Other Side.” Great. Why did they not have a sign that said “FootWash” over there? I don’t know if that means the water I was drinking was not potable, but I did feel like an ass.

Below is a shot of the lodge/cabins on the park premises. You can rent them for around $200/night. I will stick with my $16/night campsite. 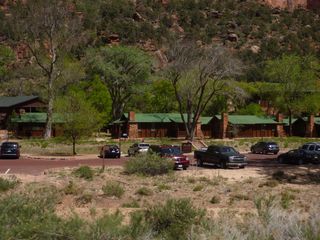 I got back around 4pm and sat in my hammock soaking up the sunlight I had missed for the last few months. After waking up at 5pm I drove into Springdale (town just outside of entrance to park) to confirm the shuttle I needed in 2 days time and grab a beer and some food.  After dinner I picked up some firewood and had a quiet night at the campsite.

All had worked out ok, and it felt good to be back at Zion and think about all that has changed in my life over the last 7 years while this place remained the same.