The Secret to Happiness….Brought to You by Hasbro

I was trying to put a capper on a great day of wildlife viewing from a canoe so I figured going to Wal-Mart and getting a board game would suffice. I looked through the shelves and was repulsed by most of the games, no longer of the board variety, rather in the class of “Interactive 3-dimensional gaming”. What happened to Candyland, Monopoly and Shoots and Ladders? I was going to go home empty-handed when I eyed a classic from my childhood, “The Game of LIFE”. 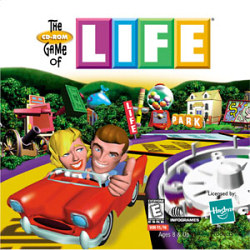 For those who are unfamiliar, the concept of the game is to get a job, get a spouse and 2.5 children, follow the trials and tribulations of middle adulthood and then retire as a millionaire. It instantly brought back memories of epic battles with my brother. Here is a link to a Wikipedia site dedicated to the game and its evolution since 1950. Why is there a site dedicated to cataloging the changes of the game? That is like asking me why I have blog.

My friend and I opened the box, attached the plastic pieces to the board that the cat did not ingest and proceeded to read the directions for a few minutes before just spinning the wheel and going with trial by fire. 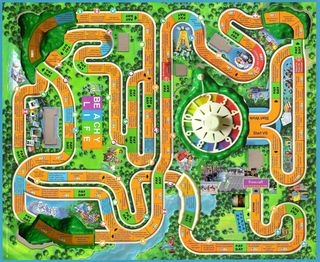 I first had to select whether to go to college or start a career. I thought, well college was fun, but was it really worth the 100K? I opted to start my career as an entertainer. What could be cooler, I would be the Danny Gaines of my time, selling out Caesar’s Palace, sharing in the limelight with Celine and Don Rickles. I looked at the starting salary of 25K. That was kinda low, but I could make it work if I stayed out of the casino floor. My competition opted for college and after shelling out 50K for school(not sure where you can get that kinda deal in the real world), she started at 90K as a lawyer. I thought I should have 6 or seven turns to progress in my career before she spun again seeing as she was partying in college. You know, increase money and life experience before she got started, but no such luck. How about jumping jobs, moving back home when parents get sick, taking a second job at the diner to pay bills.

I moved forward and came to the point where I would select a house. They had a log cabin for 60K, what a deal! You don’t see too many of those on the Vegas strip. My opponent opted for a 3 level Tudor-style home for 100K which she paid off with some loans. Within 2 turns she had paid off all loans and was living the high life. That did not seem right. What about the sub-prime mortgage, how about the economy tanking, getting transferred and having to default on the loan?

I filed it away and continued. Within a few moves I was married. I looked for the detour that said, stayed single, raised some dogs at the cabin and traveled the world, but no such luck. I was forced into matrimony…with a woman and off we went with 2 kids in tow.

We continued on, I proceeded to get my butt kicked all across the board as I opted for what I thought were cool options, but were seen as failures in the eyes of the LIFE brain-trust and the American Dream. I played the lottery a couple times, failed, while my adversary cleaned up on that as well.

At the end, I opted to retire in a modest estate. I retired much earlier then my opponent, and was forced to sit and wait while she traversed the board collecting currency left and right. She ultimately finished and retired at the millionaire mansion and was declared the winner.

It took me a few minutes of stewing over my defeat, analyzing my strategy to determine what the heck happened. I played the game flawlessly, would not have changed a thing, but still lost.  I realized that it was the game that was flawed.

Obviously it is no stretch to see where I am going with this. We live within a society ruled by the almighty dollar, even to the point that it controls/limits all the opportunity for adventure and individuality along the journey. This game was one of the few games that were on the shelf that I recall from my childhood, which means it shows a great deal of staying power. Should we be surprised? Have we changed our priorities over the last 30 years? Should we have?

I think I will create a new game called Earth. The goal of the game is survival, not just for the planet but also for the human spirit. You have to take chances along the way, leaps of faith, stand out on a limb, admit defeats. Through perseverance and determination you work within the ecosystem. Sure financial gain is one of the pillars, but what good would all that money be if you destroyed yourself in the process. It won’t be considered a setback to live a simple life, but rather a success in that your carbon footprint is small. Your success in career is not measured by salary, but by the happiness it brings others, or at a minimum, the lack of pain you inflict. It becomes a balance of the egotistical and altruistic measures. There are multiple endings. Maybe this game already exists.

If anyone wants a slightly used game of LIFE, you know where to find me.